Your recent TV series Seven Worlds, One Planet has done much to highlight the plight of many species of endangered wildlife. Nobody could fail to have got the message, from this and previous series, that wildlife the world over is suffering from the effects of global warming, from the ingestion of plastic and other toxic waste products, and from dwindling habitats resulting from activities such as tree felling for lumber and palm oil or from deliberately started forest fires.

As your impassioned pleas for more to be done become more and more relevant, we agree that human activity is largely to blame. However, it is not humans per se who are the culprits. Those causing the damage are constrained by the demands of global money-making. Large-scale industrial activity is subject to the profit imperative, and as long as profits are to be made from cutting down forests, producing harmful, non-recyclable products and spewing toxic waste into the atmosphere and waterways, small-scale attempts at recycling and conservation will come a very poor second. Over 70 percent of harmful global emissions are produced by around one hundred companies, and climate change conferences, for all their apparent earnestness, by and large achieve nothing because the measures they suggest will be bad for business. Even the emerging ‘green’ industry can only operate within the bounds of what is profitable, which is to say, not in the interest of the many.

This is not to belittle the dedicated efforts of conservation groups and wildlife lovers across the globe in trying to stem the tide. But their work is addressing the symptoms, not the cause, as are the efforts of the general public in refusing to buy products such as palm oil and dutifully recycling our cereal packets and milk containers. All such activity merely scratches the surface: the problem is global and needs a global solution.

So why not go for the jugular? If we tackle the disease itself – capitalism – rather than its symptoms, and if more of those who care passionately about the environment join the campaign to eliminate profit-based society and replace it with common ownership of the world’s resources along with true democratic decision making, then we will be well on the way to a permanent solution, with the happy effect that humans, along with other animals, will be liberated from the stranglehold of capitalism.

Hoping that in your next series you invite people to join the movement to replace capitalism with world socialism. 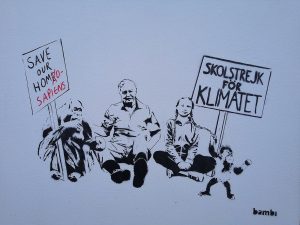