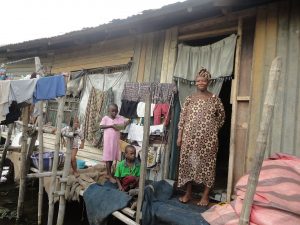 Of all the myths prevalent about Africa, none is promoted as widely as the idea that overpopulation is the core cause of African poverty. Nigeria has the largest increase in population and is destined to become the third most populated country in the world. By 2015 one-fifth of Africa’s births occurred in Nigeria alone, accounting for 5 percent of all global births. In absolute terms, Nigeria is projected to add from 2031 to 2050 an additional 224 million babies (21 percent of the births in Africa and 8 percent of all births in the world).

On average, a Nigerian woman gives birth to 5.5 children. In the conservative, Muslim-majority north, the number goes up to eight children. This is clearly more than most women want, let alone can afford. Women in northern Nigeria have little say in reproduction and require a signed letter from their husband to get family planning which is further undermined by cultural norms such as the prevalence of polygamy, child marriage, teen pregnancy, poor education.

Wealth in Nigeria in the decade ending in 2017 increased 19 percent. These increases, Oxfam has noted, could have created an opportunity to improve the lives of many. Yet, Oxfam pointed out, Nigeria has the worst score on social spending, not only in Africa but in the world.

Instead, the increases in GDP have essentially benefited only a select few. There are

currently 29,500 millionaires in Nigeria. The five wealthiest Nigerians hold a combined fortune worth $29.9 billion, for just about a $6 billion average. Nigeria’s single richest individual, Aliko Dangote, Oxfam calculated, annually earns enough income off his wealth to take 2 million poor Nigerians out of extreme poverty every year and still at the end of the year be every bit as rich as at the start. Oxfam pointed out that he ‘earns’ about 150,000 times more from his wealth than the poorest 10 percent of Nigerians spend on average on their basic consumption in a year (tinyurl.com/v5y3zz2). Dangote could spend $1 million a day and still not run out of money for 46 years.

Corruption has long plagued Nigeria due to public officials feasting on funds generated from crude oil exports. Last year, Nigeria ranked 148th out of 180 countries on Transparency International’s corruption index. A report in 2012 found that it costs Nigerians $8.3 billion to pay the salaries of those in politics yet only $7.4 billion was to be spent on developing infrastructure. A Nigerian senator takes home well over a million dollars every year in salary plus expenses and benefits. Nigerian politicians get away with this in a country where millions go to bed hungry.

In Nigeria more than 60 percent of the population live on less than a dollar a day. The unemployment rate stands at 23 percent. According to reports Nigeria has overtaken India as the world’s poverty capital. A study estimated that 87 million people in a country of nearly 200 million were living in extreme poverty, compared with 73 million people in India. According to a 2018 African Development Bank report, nearly 80 percent of Nigeria’s 190 million people live on less than $2 a day. A report on inequality by Oxfam International said one in 10 children in Nigeria died before the age of five. UN data puts Nigeria’s under-five mortality rate at 100 per 1,000 children – or one in 10.

The Danish Consul-General, Per Christensen, has said that Nigeria could produce food for some 600 million people through the application of the right technology. He said, ‘Let me say that the agricultural development potential in Nigeria is bigger than that of Brazil when Nigerian farmers engage in technology farming’ (tinyurl.com/ybbybt7l).

Nigerian experts point to the case of India, condemned by many experts in the 1960s to perpetual hunger. Today India is producing the bulk of its own food.

There are a number of reasons why the population boom in Nigeria is going unchecked, such as children being seen as a status symbol and a retirement plan. But the lack of political will is uppermost. People who claim that too many people is the issue are shifting the blame from the rich to the poor.