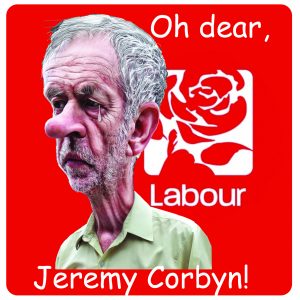 The supposedly halcyon days of Corbyn’s successful Labour leadership contests in 2015 and 2016 are now but a distant memory as the chants of: ‘Oh Jeremy Corbyn!’ fade away like ghosts in the night; another ‘fame to infamy saga’ in the personality cult of contemporary politics.

After all, as the pundits never tired of telling us, Corbyn was not up to being a leader; perhaps the biggest compliment that could be levelled at him given the bear pit, come cesspit, of the Westminster Bubble. This fixation of the media with personality was perhaps epitomised by a rather fatuous post-mortem piece in the Guardian newspaper penned by Jonathan Freedland (tinyurl.com/stwydw7) who, in spectacularly reductionist mode, summed up the reason for the Corbyn defeat as his: ‘lack of charisma’, proclaiming – with somewhat sparse and dubious evidence – that the Left can never win elections with a leader with no charisma; but concluding, somehow, that the Right can win elections merely by fielding a sack of potatoes. Freedland spent the remainder of the article in a kind of je ne sais quoi fog, preferring to point to examples of men whom he claimed had charisma, such as Blair and Clinton, rather than enlighten his readers as to what it actually comprised. With political commentators like these it is hardly surprising that the public are increasingly dumbed down into an apathetic stupor, or else whipped up into a fervour of unrealistic expectations when it comes to politics. It may come as a shock to Mr Freedland, and his ilk, but the charisma hypothesis lacks a certain ‘completeness’ when it comes to explaining Corbyn’s defeat.

Corbyn was a fish out of water from the get-go; thrown into the spotlight by accident, with no-one more surprised than himself. Although a career politician he was always an outrider to the main pack, having defied the Party Whip and voted with his conscience more than 500 times; usually taking a left-wing oppositional stance to war and ‘imperialism’ and seeking to champion causes of social and economic justice; in a nutshell, arguably the complete antithesis of the average modern day politician, who excels in guile, duplicity and low cunning. The establishment was not about to let an anti-imperialist, sandal-wearing vegetarian peacenik in a Lenin cap into the hallowed halls of power. And here ‘the establishment’ includes a large chunk of his colleagues in the parliamentary Labour Party who constantly plotted and schemed to undermine his leadership.

The more Corbyn bent over backwards to appease his critics the more they lambasted him. Not that such an establishment/media-bashing campaign is anything new when it comes to exorcising the Left from respectable society, but Corbyn seemed incapable of combatting the onslaught; compounded by some of the people around him who often seemed to be setting him up for a fall, rather than helping to get him out of a jam. He went into the 2019 General Election, mumbling and fluffing his autocue lines; to some he was barely recognisable from just two years earlier when he commanded public rallies of thousands, delivering rousing speeches on the stump.

But it was not just Corbyn’s emaciated persona that caused such a catastrophic defeat in the 2019 general election. Many in his party on both the right and left (from Blair to McDonnell) also handed him a poisoned chalice in the form of an incoherent Brexit stance. A 10-year-old child could have told him that you don’t go into a Brexit-dominated election with polarised public opinion and refuse to say whether the UK should be in or out of the EU and then witter on about a second referendum. It was a no-brainer that the ‘Oven ready/let’s get Brexit done’ slogans of the Tories would have more appeal to a Brexit-fatigued electorate.

The Labour Party ran a mind-bogglingly inept campaign in other ways. It had echoes of the debacle with Bernie Sanders during the 2016 Primary contest, when the Democratic National Committee sabotaged his candidacy for the nomination; preferring the prospect of handing Donald Trump the Presidency, by backing the lame duck candidate Hilary Clinton, than risk a left-leaning Sanders.

Another factor in Corbyn’s demise was the digital media with its use of algorithms for data analytics and targeted marketing through the Twittersphere et al, together with a panoply of so-called fact-checker websites, often presenting diametrically opposite views of the same ‘facts.’ All this digital electioneering was invariably at Corbyn’s expense; the pinnacle of cynical manipulation being when the Conservative Party changed the name of its Twitter account to: ‘factcheckUK’.

Then there was the first-past-the-post system which put a further nail in Corbyn’s coffin. The outcome of general elections are always determined by a relatively small number of marginal constituencies and this time around, with the help of the shenanigans of Nigel Farage and the Brexit Party, this worked against Labour significantly.

Then there was the issue of the ‘wish list’ Labour Manifesto. Dependent on one’s perspective it was either too radical, or not radical enough. Predictably the party grandee, Tony Blair, was in the ‘too radical camp’ declaring it: ‘a brand of quasi-revolutionary socialism that has never appealed to Labour voters.’ A ludicrous assertion given that there was nothing either revolutionary or discernibly socialist in it.

Since its inception in 1906, the Labour Party has invariably kept within the modest confines of what has been dictated to it by the powers that be; that is what they deem possible, or tolerable, within capitalism to mitigate the worst effects on the masses whilst maintaining profits for the owners of capital. On the rare occasions when it has stepped outside of such ‘operational constraints’ it has quickly been reminded by the banks, the corporations et al. who is really in charge -– a run on the pound, a debt crisis, a character assassination, has quickly brought the Labour Party to heel, or else they have been ousted on the basis that the Tories are much better suited to manage capitalism.

Prospects for the new decade

Johnson’s crowing about ‘the people’s government’ and ‘protecting our

wonderful NHS’ etc. will go the way of all his other mendacious utterances to be supplanted by the most pro-business authoritarian government the UK has seen since Thatcher. Johnson is another Trumpian political figure, a few notches higher on the IQ scale; a political buccaneer, a chancer, a populist, who will lie and cheat to gain political advantage and personal aggrandisement whilst serving his masters, the capitalist elite. The consummate modern-day politician.

The wealth and income inequality gap will become ever more grotesque as Johnson applies meagre rations to public services whilst dishing out largesse to the private sector; further enriching the minority by impoverishing the majority. The remnants of the fetters on capitalism – taxation and regulation – will most likely be further rolled back in order to give free rein to ‘the entrepreneurs’, while the mass of long-suffering people will either be seduced with the discredited notion of ‘trickle-down economics,’ or else met with a cocktail of omnipotent surveillance and coercive force in order to subjugate them.

The next few years will be grim for the working class, while the capitalist class will be jubilant, but this may be their last fling. Many people over the years have predicted, prematurely, the end of capitalism, underestimating its ingenuity, dynamism and resilience. But the twin existential threats of nuclear conflagration and ecological collapse are becoming ever more acute. It is impossible for capitalism to solve these problems because it is the inherent cause of them. The very essence of capitalism is exploitation in the name of profit, exploitation of the working class by denying them the full value of their labour and exploitation of the natural environment by gobbling up resources and ignoring the ‘externalities’ in the form of degradation of the natural environment. The risk of nuclear war is ominously present as nation states and transnational corporations fight to claim dwindling natural resources and to secure new markets.

The human species remains incredibly resilient to such capitalist exploitation, but the natural environment is not faring so well. Other species are becoming extinct at an alarming rate and the global ecosystem, upon which all life depends, is under threat. An alternative economic system is urgently needed. There is renewed talk of socialism as the alternative. But often these are ‘false flags’ amounting to capitalism with a kinder face. Sometimes they are genuine attempts at radical change, but stop short of the abandonment of capitalism. But unless the exploitative nature of capitalism is confronted head-on and supplanted, then such movements will be insufficient.

Socialism has the potential to provide the solution by changing the fundamental economic relationship between people, and between people and the planet. Rather than commodifying every aspect of life and concocting markets where goods and services are provided only when there is the ability to pay, instead the provision could be based on need; rendering the notion of price, market and money redundant. Instead of the world’s resources being mercilessly plundered in the name of profit they could be held in common ownership for the benefit of all. These socialist fundamentals would help to avoid the immense waste under capitalism and hasten a more sustainable existence.

Corbyn was successful for a short time in galvanising a mass movement with rhetoric of radical change and talk of socialism; but led his followers down a side road of reformism which in the event was a dead end. By misrepresenting reform of the capitalist system as socialism he, and others like him, inadvertently undermine the cause, rather than advance it. These efforts, whilst

initially creating a momentum for change, are counter-productive as they inevitably end in tears. As Marx observed, ultimately socialism will come about when the majority of the working class understand its transformative potential and collectively work to bring it about. When people decide to take that road they will not need leaders – charismatic or otherwise. They will learn to find their way by themselves.

Manchester Public Meeting: `Where charity begins and why it should end`