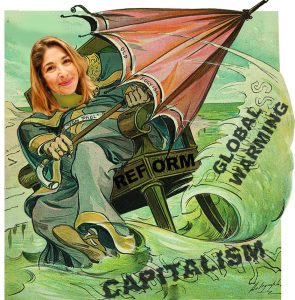 We have seen wildfires in California and Australia. Hurricanes have been ripping apart areas from New Orleans to the Caribbean leaving devastation and death in their wake. Severe drought has been inflicted on countries from Bangladesh to South Africa. Closer to home, we have witnessed devastating floods in Cornwall and Yorkshire. The increasing frequency and power of these disasters have shaken the notion that these are merely acts of nature, about which we can do very little. These changed weather patterns are clearly evidence of what the majority of climate scientists have been warning for some time that the global warming crisis is upon us and humanity needs to act now to avoid a global catastrophe. Even some representatives of global capitalism are worried. Kristalina Georgieva, the managing director of the International Monetary Fund, addressed the most recent international climate change conference (COP25) last December and is pushing for a higher carbon tax (‘Tackling climate risk is just what IMF should be doing,’ Observer, 1 December). You need to be either very delusional or be profiting from the fossil fuel industries or just be Donald Trump to deny there is a climate crisis.

So the launch of Naomi Klein’s latest book On Fire: The Burning Case for a Green New Deal (Allen Lane, £20) can be considered as rather timely. Naomi Klein is a writer, journalist and activist and first made her mark as a leading figure of the ‘anti-capitalist’ movement twenty years ago. The book was published on the twentieth anniversary of her first book, No Logo, which explored the rise of global corporations and their effects on the environment and workers, particularly those who live in poor third world countries. In her new book, she recounts her own experiences as a climate activist and how, two years ago, she was arrested at a protest against the Keystone tar sands pipeline in Washington DC. She is co-founder of a Toronto-based climate project group called Leap, which brings together people from different backgrounds to campaign for climate justice and other reforms.

The book is made up of a collection of essays, reports and lectures spanning the last decade. Its central tenet is that the planet is facing a climate emergency and we are running out of time. To back this up, Klein refers to a report published by the International Panel on Climate Change (IPCC) in October 2018 stating that global emissions of greenhouse gases need to be cut in half within 12 years (11 years from the date of the book’s publication) for us to stand a chance of keeping global warming within the target increase of 1.5C since pre-industrial times.

Capitalism indicted, but what is capitalism?

As in her previous book, This Changes Everything: Capitalism vs the Climate, she blames capitalism for the climate crisis, and consequently argues that tinkering around with the existing economic system, with measures such as increasing the carbon tax, is not enough. Changes in individuals’ personal lifestyles, such as eating less meat and using public transport rather than driving cars, will not avert climate catastrophe. What is required is collective political action by grass-roots movements to achieve a radical overhaul of the current economic systems. She draws inspiration from the campaigning groups against climate change. There are the global school strikes, where young people are demanding more action by politicians on the environment. Klein makes the interesting point that these school children didn’t just read about climate change, but many of them have actually experienced it, whether it is the severe droughts in South Africa or the toxic air pollution in Delhi, India. In the same way socialists argue that workers don’t come to socialism by just reading about it, but by their experiences of the social problems they face within capitalism. She says that it is pressure from this activity, along with other movements, such as the Sunrise Movement and Extinction Rebellion, that will bring about change. As to be expected, much of the focus is on Greta Thunberg, the 16-year old schoolgirl who is lauded as a leading spokesperson of this youth movement.

Klein rejects the use of technology, also known as geo-engineering, to fix the environment. This can be done in a number of ways. One way is to inject the upper atmosphere with sulphur with the aim of deflecting some of the sun’s rays into space in order to cool the planet, and another is to fertilise the oceans with iron dust to create algal blooms which would soak up more carbon. However, tampering with nature’s ecosystems, she argues, would be likely to have adverse consequences.

The Earth’s temperature has been rising since the industrial revolution, the cause of which has been the burning of fossil fuels, oil and coal, by capitalist industry, releasing more greenhouse gases, such as CO2 and methane, than can be absorbed by the atmosphere, along with deforestation, resulting in fewer trees to soak up the extra carbon. Over the last thirty years or so, when many countries deregulated and privatised their industries, global trade has expanded and at the same time global emissions have escalated. Klein notes that in the same period, often referred to as ‘neoliberalism’, social and economic inequality has also arisen. She recognises that climate change and other social issues, such as social, gender and ethnic inequalities, have the same cause, which is capitalism which accumulates wealth in the hands of a tiny minority, and therefore does not accept the argument sometimes put forward that the climate issue must take precedence over everything else. Any action to resolve climate change must equally tackle other social problems. This is also known as intersectionality, where separate campaign issues come together in one struggle.

She also makes the interesting point that capitalism has only existed for a small period of human history and that humans can adapt to live in different social orders. She criticises those economists who put forward the view that humans are ‘selfish, gratification-seeking units’ and historians who espouse the Great Man theory of history.

Despite these insights, Klein doesn’t advocate the abolition of capitalism and its replacement with socialism. To see why, we need to work out what Klein means by capitalism. She doesn’t give a specific definition. However, when discussing how some climate change deniers compare action to combat climate change with so-called communism, Klein remarks that ‘the Soviet-era state socialism was a disaster for the climate’ (p.79). Again, when referring to the Soviet Union, we learn on p. 251 that ‘we have to be honest that autocratic industrial socialism has also been a disaster for the environment’ and when mentioning Venezuela on the same page ‘Venezuela’s petro-populism is a reminder that there is nothing inherently green about self-defined socialism’. She does praise the environmental policies of countries such as Denmark, Sweden and Uruguay that have a ‘democratic-socialist tradition’. From these comments, we can safely infer that when Klein talks about capitalism she is referring to private capitalism, in particular the large corporations and the banks.

We, on the other hand, define capitalism as a global society where the means of production are owned and controlled by a minority class to the exclusion of the majority of humanity, the working class, who have to seek employment by the owning or capitalist class. Production is geared to profit and businesses compete with each other in the marketplace. Concerns about the environment and human welfare must take second place. Nation states have to look after the interests of their respective capitalist classes and this leads to rivalries between them which can end in military conflict. Socialism, which will need to be established by a socialist working class after taking political action to abolish capitalism, is a society of common ownership, where the means of production are owned by everyone and the state has been abolished and there is no need for the use of money.

Klein advocates the New Green Deal instead. It is clearly not based on the principles of socialism, but, as the name suggests, is inspired by Franklin D. Roosevelt’s New Deal drawn up during the 1930s Depression and the Marshall Plan enacted after the Second World. It was mooted as a way of pulling capitalism out of recession during the last economic downturn, a form of ‘Green Keynesianism’. Klein holds up the US Congress New Green Deal resolutions as proposed by US Democrats Alexandria Ocasio-Cortez and Ed Markey as the way forward. They call for ‘huge investments in renewable energy, energy efficiency, and clean transportation’ and for the US to reach net-zero emissions in one decade. Workers who transfer from high-carbon industries to green ones have their wages and benefits protected, and everyone who wants to work should have guaranteed employment. No specifics are given, as Klein describes it as a ‘work in progress’ with communities, many of which are indigenous and ethnic minorities, that have borne the brunt of climate change destruction, providing input into the process. They also throw in reforms – free universal care, childcare, and higher education. It is not a politically organised working class that will be the agency of these changes, but the state run by a ‘progressive’ Democrat government headed by Bernie Sanders or Elizabeth Warren. In the UK it would have been a Labour government headed by Jeremy Corbyn with the British equivalent of the Green Industrial Revolution – that is until the results of the December General Election put paid to this possibility. This progressive state would not abolish the corporations, but bring pressure to bear on them. It may refuse to issue permits for fossil fuel companies to build pipelines and export terminals. Like with the New Deal, the government would be backed and influenced by social movements.

The Green New Deal will not replace the market system, on the contrary, according to Klein ‘Markets play a role in this vision, but markets are not the protagonists of this story – people are’. And as can be seen in the above paragraph, there will be no change to the employer and employee relationship that is a feature of capitalism.

The climate crisis cannot be resolved within a nation state, but requires a global solution. Klein recognises this, and envisages every country will implement their own version of the Green New Deal. When she talks about the rich countries developing their green deal earlier so as to allow for poorer ones to transition more slowly, this implies that there will be global cooperation. This is a tall order in a society where every nation state competes for markets, sources of raw materials and strategic routes. Recent history is not encouraging. The US is in a trade war with China, there is the re-emergence of the cold war between Russia and the West, and the UK is arguing with its European neighbours on how to exit from the European Union. Not to mention that the international climate change conferences over the last thirty years have not exactly been rip-roaring successes.

To curb the pressure on the Earth’s resources, Klein argues we need to end the wasteful consumer lifestyle. To achieve this, she suggests a shorter working week so that workers can enjoy publicly-funded arts and urban parks, rather than spending their wages on cheap disposable consumer goods.

Our vision of socialism is often dismissed as being utopian. There is a lot of informative material and useful analysis in this book, but its contention that the New Green Deal can resolve the climate crisis and social and economic inequalities within the capitalist market system really is utopian. Only the abolition of capitalism and its replacement with socialism can achieve this.