By the time you read this, ten English football clubs will have played seven competitive games stretching from 3 December to 27 December. The TV rights for showing these fixtures were purchased by Amazon Prime in a three-year deal struck in June 2018. According to CityAM (3 December), if Amazon, the biggest company ever to have bought English Premier League TV rights, is to make its mark it will have to sign up plenty of new customers to its Prime membership.

At present, this intervention does not threaten the current status quo, under which Sky Sports and BT Sports dominate the current televising of Premier League fixtures, with a few smaller competitors including DNZA who are interested in the procurement of streaming rights, etc. Having dipped their toes in the water, Amazon Prime will surely consider increasing their investment by procuring more broadcasting rights in the near future. However, there is so much money sloshing around in the EPL at the moment that there will definitely be a future feeding frenzy in which all of the competitors will attempt to grab what they can.

If we liken the current EPL to a large cake – we can say that there will be plenty of cake to go round but not sufficient for everyone’s wants or needs. So there will be losers as well as winners. Capitalism will separate the rich from the not so rich, rewarding as ever those that pay the most, by allocating them a place at the table. The unfortunates who were unable to bid enough for inclusion will just have to sit out on the bench. Like the working class have to all the time under capitalism. 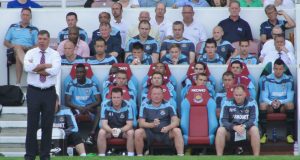