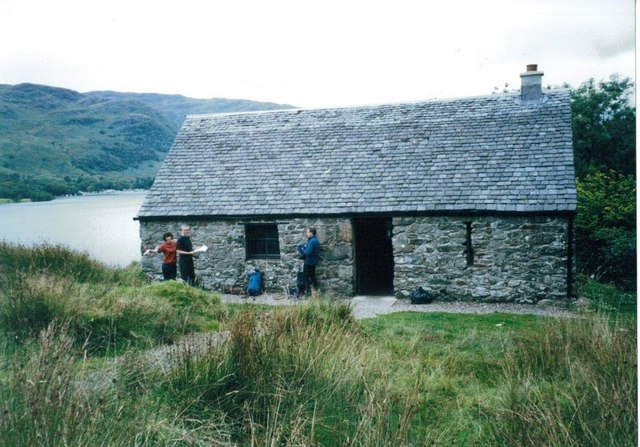 When socialists introduce our fellow-workers to the concept of common ownership, of making work voluntary, we frequently meet with the response, ‘It’s all very well but it can’t happen in practice’. This often makes socialists rock back on our heels with surprise because we can see all around us where the principles of cooperation and mutual aid are applied by ordinary folk with a shared need.

A ‘bothy’ was traditionally a building constructed for the accommodation of farm or estate workers. However, these days it means a building used as shelter for hill-walkers and climbers, mostly in remote areas. The Mountain Bothies Association (MBA) maintains about 100 shelters across Great Britain. These shelters are unlocked and are available for anyone to use. The maintenance and upkeep is carried out by volunteers.  Users are asked to follow a ‘bothy code’ which prohibits the use of the buildings by commercial groups, for example by guided tours or adventure holidays although they are free to use the bothies as a lunch shelter or in the event of a genuine emergency. It is only profit-seeking commercial groups that abuse this. As the BMA complained in a statement last August:

‘There have been incidents when legitimate bothy users have been made to feel unwelcome, inconvenienced or even refused entry when commercial groups have been in residence. Our volunteers who maintain the bothies, not unreasonably, feel aggrieved to know that their hard work is contributing to the profits of a business that probably does not support our organisation in any way.’

As one user explained ‘Of course, not everyone is going to be your new best pal, and there are people who simply prefer to keep their own company, but the one thing you should be able to rely on from a bothy companion is trustworthiness and mutual assistance. I’ve both given and received advice in bothies, shared someone’s last teabag and seen a drookit (drenched) traveller clad for the night in bits and pieces of several others’ dry clothes while his own hung in front of the fire. In a bothy you really are all in it together’.

Also we should not ignore how ramblers and mountaineers rely upon mountain rescue volunteers in an emergency. Rescue teams give up their time to provide a free service to people who request assistance. Volunteers save lives and are available 24/7, 365 days a year, in all weather conditions. Some suggest that in socialism unpleasant and dangerous jobs would be avoided but there never seems to be any lack of volunteers for mountain rescue.

And who would willingly place themselves in a life-threatening position? Well, lifeboat crews of the non-state organisation, the RNLI, voluntarily and without recompense risk their lives in storms at sea for the welfare of others and the common good of society. And there exists a waiting list of suitable applicants to join it, so recruitment is not a problem.

Kropotkin, the author of Mutual Aid, pointed out:

‘The crew of a lifeboat do not ask whether the men of a distressed ship are entitled to be rescued at a risk of life… One of the noblest achievements of our century is undoubtedly the Lifeboat Association. Since its first humble start, it has saved no less than thirty-two thousand human lives. It makes appeal to the noblest instincts of man; its activity is entirely dependent upon devotion to the common cause, while its internal organisation is entirely based upon the independence of the local committees’. (Anarchist Communism: Its Basis and Principles).

One thing we don’t require to be told is people’s capacity to organise self-help in support of each another. Along with many other charities these are affirmations of our humanity.