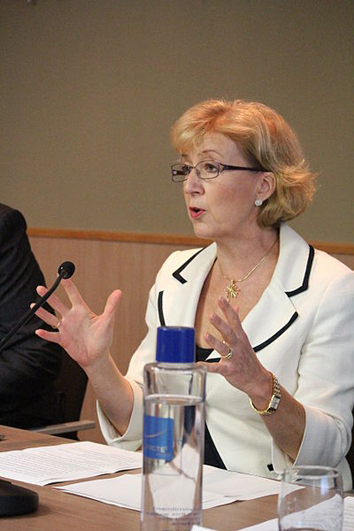 ‘Everything is now monetised’. You often hear that expression nowadays. It amounts to the same as the old expression, ‘money makes the world go round’. In her speech to the Conservative Party Conference in October Andrea Leadsom’s re-iterated this idea, but the Environment Secretary had little else to offer.

The speech was dominated by income figures and ‘economic potential’, as she put it. ‘Grow, buy, sell’, she said.

There was nothing of any insight from her into the problems or solutions that confront us concerning environmental degradation. Of course, you may not have expected complex analysis and argument, but you would have been excused for thinking that you were listening to the Trade Secretary. You would expect the Environment Secretary to at least address some of those problems and solutions as if she did know something about them, other than how much money could be generated from them.

She announced a 25 year plan for the environment but, again, gave little detail, (probably because there isn’t any). The suspicion must be that any legislation to be introduced will give favour to commercial interests. Perhaps the recent handing out of the first fracking licence is stage one of that plan; and this from a government that wants to leave the environment in a better state than they found it. Well, we’ve heard that before: Cameron’s ‘greenest government ever’, (surely he meant meanest), has come to nothing.

The inherent problems in tackling the issues are difficult enough in themselves. The problem of having to fund the infrastructure projects necessary to rescue the environment, and the requirement to turn a profit demanded by private industry (effectively in charge of all infrastructure projects in Britain), only serve to make the solutions more difficult, or even impossible, to achieve. The curse of spiralling costs and contract re-negotiation reflect this very well, as we can see across all sectors – HS2, Crossrail. Thames Water Ring Main, Hinkley Point etc.

There never seems to be enough funding. But a lack of it isn’t the problem. The problem is the idea of funding itself. While the system of production for profit remains in place there will never be enough funding, and we will move further and further away from the kind of environment we should all want to live in.

The socialist point of view is quite clear. Remove money, remove funding from the equation, and you remove the main barrier to technological advancement and, as concerns the environment, to a safe, secure future. A system of production for use, a moneyless society, a socialist society, would provide a real opportunity to create a sustainable and secure environment.