Exhibition Review: ‘We Only Want the Earth’ 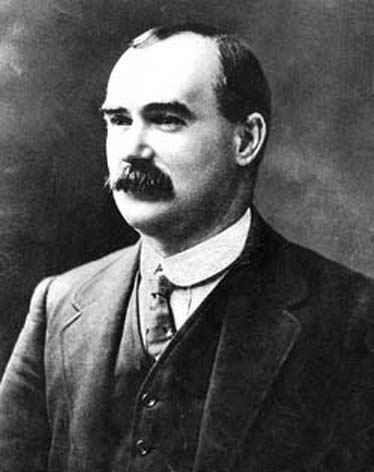 Among the anniversaries being marked this year is the centenary of the Dublin Easter Rising (see the March Socialist Standard). James Connolly, who was probably its best-known figure and who had to be tied to a chair so he could be executed by a British firing squad, is commemorated in an exhibition ‘We Only Want the Earth’ at the Working Class Movement Library in Salford. As the curators note, Connolly’s life ‘is often remembered more for the manner of his leaving it than for the politically active way he lived it’ (echoes of the Thane of Cawdor in Macbeth).

The exhibition mainly consists of displays of books and pamphlets by or about Connolly and related political movements, together with some letters and panels containing photos and relevant information. It does not, however, say much to explain his move towards Irish nationalism, though it is stated that he had once argued that independence without socialism would just mean replacing one set of capitalist exploiters by another.

But then Connolly’s status as a socialist in the first place is somewhat arguable. He had been a member of the Social-Democratic Federation, and part of the Impossibilist revolt against H.M. Hyndman. However, the Irish Socialist Republican Party, which he helped found in 1896, stood for state-run banks and a minimum wage. Its aim, though not mentioned in this exhibition, was ‘the public ownership by the Irish people of the land, and instruments of production, distribution and exchange’ (so not socialism, as there would still be exchange, and even at this date seen in national terms). He was opposed to divorce, and saw religion as a private matter, not connected to politics.

The doomed 1916 uprising included a statement by the ‘Provisional Government of the Irish Republic’, which begins, ‘In the name of God and of the dead generations from which she receives her old tradition of nationhood, Ireland …’. Connolly was one of the signatories of this and, even if we regard this phrase as just a piece of rhetoric, the whole text reveals the mystic nationalistic nonsense he was now involved in. A copy of this document is displayed in the Salford exhibition, but without any commentary on it.