Imitation of Life was a 1959 film, directed by Douglas Sirk, that dealt with issues of ‘race’ and gender in the US. One of its characters was a black woman whose daughter had a light-enough skin to pass as white, and the film looked at how successful she was in making her way in the world. The film was controversial at the time, and remains so, in terms of the extent to which it questioned or reinforced stereotypes about black people. 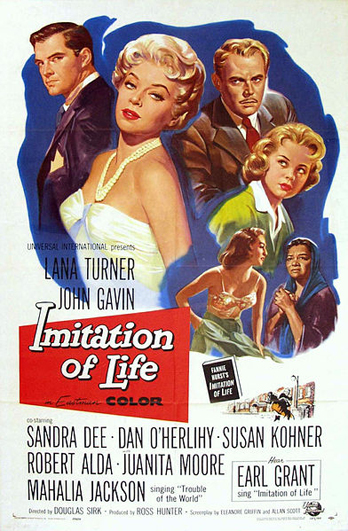 Now an exhibition of the same title is on at the Home arts centre in Manchester. Its sub-title is Melodrama and Race in the 21st Century, with ‘melodrama’ meaning something which is exaggerated and appeals to the emotions. Works by twelve artists are displayed.

Photos by Sophia Al-Maria deal with facial whitening creams, which are produced to be sold in South Asia, the Middle East and Africa. Many people in India are obsessed with having lighter-coloured skin. The packaging of the products is distorted in these shots, presumably echoing the faces to which these creams are applied.

Martine Syms looks at American situation comedies. The Cosby Show, which ran from 1984 to 1992, was attractive to a black audience as it showed black people as just like anyone else, but it erased ideas of black struggle.

Jayson Musson provides a video, using his alter ego Hennessy Youngman, on ‘How to be a successful black artist’ (it is available on YouTube). Success involves, for instance, being angry, which can be achieved by looking at a photo of Emmett Till in his coffin (Till was beaten and shot in Mississippi in 1955 at the age of fourteen after speaking to a married white woman). If all else fails, fall back on slavery, as white people lack a comparable shared cultural experience. White people, he claims, do not want to understand black artists, as this would mean the artists being just like the white spectator. This is clearly satirical, but its aim is to comment on power relationships and hierarchies within the art world, since black artists (and women) are under-represented in galleries.

So an exhibition that different visitors will quite likely react to in different ways. But whether it is quite as significant as the curators claim is another question.