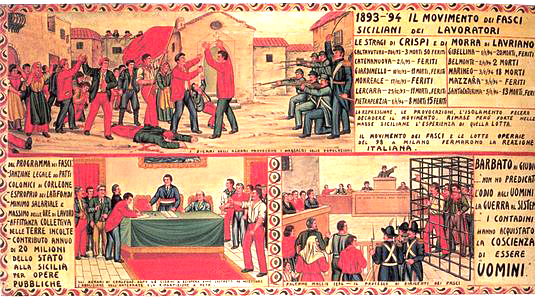 We examine the life and political approach of this Marxist political thinker.

The Italian political thinker, Antonio Labriola (1843-1904) was described by Friedrich Engels as ‘a strict Marxist’. However, he approached Marxism quite late in life and first mentioned Marx in 1883 in a review of Bärenbach’s book on the social sciences (Die Socialwissenschafte).

Labriola started corresponding with Engels in 1890 and in the same year, with Filippo Turati, founder of the ‘Italian Socialist Party’, he wrote an address to the German Social-Democratic Workers’ Party Congress in Halle. When the ‘Italian Workers’ Party’ was founded at the Congress of Geneva two years later, Labriola was critical of its platform, and when that organisation became the ‘Italian Socialist Party’ in 1894 under the leadership of Turati, Labriola complained to him in the following terms:

‘Socialists must … be clear… they have to stop being little Jacobins and politicians…You want to make propaganda amongst the bourgeoisies, you want to make socialism nice. God help you in such a philanthropic feat, because in my view the bourgeoisies are only fit to be hanged. I will not be lucky enough to do that myself, but I do not want to do anything to contribute to a delay in that happening.’

According to Labriola the Party of the working class should have ‘Masters’ (in the sense of Teachers), and he seems to have had in mind people like Marx, Engels and himself. But he was clear that the Party should not have what he called ‘a Jacobin ruling minority’. Furthermore he saw Turati as reformist, as he explained in 1891:

‘[Turati’s] eclecticism is not a consequence of [his] intelligence, neither of [his] immaturity, but it is a necessarily reflection of the world in which we live, where everything is subjective, arbitrary, incidental, and therefore there is not space for the organised science, for party discipline.’

‘Eclecticism will not disappear soon. It is not only the effect of an intellectual confusion, but it is the expression of a situation. When just a few more or less socialist individuals address themselves to ignorant proletarians who are apolitical and largely reactionary, it is almost inevitable that those individuals will be thought of as utopians and demagogues.’

But Labriola also thought that, via a combination of education and the necessity for workers to overthrow capitalism, this eclecticism (taking the form of opportunistic revisionism and reformism) would disappear in the longer term. In this sense Labriola was an optimist and is distinguished from other revolutionaries such as Lenin and Gramsci who held the pessimistic view that working-class self-determination was impossible and only coercion would be able to guide the masses.

‘As for (….) Labriola, the malicious tongue which you attribute to him may have a certain justification in a country such as Italy, where the socialist party, like all the other parties, has been invaded, like a plague of locusts, by that “classless bourgeois youth”, of which Bakunin was so proud.’

In October 1892 Labriola had informed Engels about a banking scandal in the Banca Romana involving some members of the Italian Socialist Party, who he referred to as ‘locusts’. The following year Labriola was heavily critical of the Party for its unsupportive position concerning the uprising of peasants, artisans, and industrial workers in Sicily, known as the Fasci Siciliani. It described this event as ‘a poor souls’ revolt’, whereas Labriola saw in it the first example of Italian socialism in action.

The main contribution of Labriola to Marxist thought did not come until several years after this when, in 1895, he published his first important work on the philosophy of historical materialism: In Memory of the Communist Manifesto. In this Labriola wrote:

‘We must insist on the expression ‘democratic socialisation of the means of production’ because the expression ‘collective ownership’ mixes up legal expression with economic fact. It conjures up in many people’s minds an increase in monopoly (…) and an ever resurgent State Socialism, whose effect is to augment the economic means of oppression in the hands of the oppressing class (…) The proletarian mass either knows already or will understand that proletarian dictatorship, which will have to prepare the socialisation of the means of production, cannot proceed from an uprising created by a few, but it must be and it will be the result of the proletarians themselves, who will have for a long  time been a political organisation.’

Following this, Labriola published a further analysis of historical materialism from a philosophical standpoint (The Materialist Conception of History, 1895) and in 1898 he replied to the views of the French writer George Sorel in Speaking on Socialism and Philosophy. He also carried on actively criticising Turati’s ‘eclectic’ politics and his PSI, writing for example that ‘in Italy there is no working class organisation and so the class struggle and the political party with a workers’ base are premature’.

In this era of ‘revisionist’ politics, Labriola was active in combating, for example, Enrico Ferri who tried to define Marxism as a derivative form of Darwinian evolutionism, and the German social-democrat Eduard Bernstein who took a similar position to Turati.

Labriola had already anticipated that Russia’s so-called ‘agrarian communism’ could not be a path to socialist revolution and, in agreement with Engels, that Russia had to first go through a bourgeois phase of development (commodity production) before it could host a real emergence of socialist ideas. His views on Russian under-development, however, led to what many have seen as a kind of moral stain in his thought – his position on colonialism. He saw under-development as being resolved via colonisation by developed nations, so bringing under-developed nations to a material level at which socialist ideas could begin to have some resonance. It should be said that he changed his mind several times on this and seemed, before Engels’s death in 1895, to agree with Engels that governments were too corrupt and bound to financiers and to the stock market to prevent investors taking over colonies and exploiting them rather than the lot of the masses there being improved.

However, in 1897, on the question of colonisation of Libya, Labriola seemed to fall back to his previous position, arguing that socialists should support the Italian government’s attempts to colonise Libya on the grounds that ‘there cannot be progress of the proletariat where the bourgeoisie is incapable of progress’. This was anathema to the Marxists of the time.

After his death Labriola was read by and influenced Italian idealist philosophers such as Benedetto Croce and Giovanni Gentile as well as by others claiming to be in the Marxist tradition such as Rodolfo Mondolfo, Antonio Gramsci and Lelio Basso and, outside Italy by Trotsky, Lenin and Plekhanov.

English translations of some of his writings can be found here: www.marxists.org/archive/labriola/index.htm