Greasy Pole: Wind At Daybreak For The New Politics 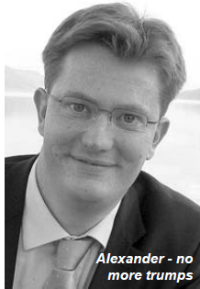 As dawn broke on 6 May Danny Alexander, the fresh-faced Chief Secretary to the Treasury, sat alone in the Sky TV studio and, in what one seasoned observer called “a Facebook moment”, relieved himself of an explosive fart.

At the time he was composing himself to spout some predictably scripted excuses and evasions about the LibDem losses in the local elections and their disappointment at the result of the AV referendum. Somewhere outside the studio the Tories were gloating. He assumed he was unobserved but his contribution to the day’s entertainment was recorded on some 100 monitors. Well it was a change from the usual noxious emissions from the mouths of politicians but should we be worried about Alexander and his flatulence? Was it the only way for him to relieve his despair at the exposure of the LibDem’s deceit, their savaging by their supposed Tory allies and the crumbling of a generation of baseless ambitions? Was it heralding his guilt at his own part in provoking his party’s debacle?

He rose, after all, through the ranks as a personal assistant of the disastrous Nick Clegg. He was deeply involved in composing the LibDem election manifesto – including those pledges such as opposing any rise in tuition fees – and he was at the lead in negotiations to form the coalition, heedless of the disastrous effect on his party of previous such arrangements. Which did not affect his enthusiasm for the job of Chief Secretary and its work of “deficit reduction”, which entails reducing the incomes if masses of people who so meekly vote for a social system which brings them such misery and fear. Any examination of Alexander must reveal that his ailments are chronic and resistant to treatment.

Clegg
However hapless his condition, Alexander cannot rely on any therapeutic example from his colleagues (and, of course, his rivals) in his party. Clegg, for one, persists in what might be called his optimism were it not so perilously separated from reality. On the first anniversary of those blissfully exciting days when the coalition came into being in the fragrance of the rose garden at Number Ten, he said: “There is a reason neither of the two bigger parties won last May. Neither of them were really trusted to deliver both a strong, dynamic economy and a fair society. We can be trusted on both counts…I am confident that showing we can combine economic soundness with social justice – competence with a conscience – will make us an even more formidable political force in the future.” Those words were breathtaking in their audacious refusal to acknowledge the real situation – for example the survey for ITV News which showed 49 percent regarding the Coalition as “bad for Britain” and 63 percent saying they do not trust Clegg.

Then there was his boss Cameron who made a contemptuously obstinate dismissal of LibDem claims to be able to smooth the crueller edges of Tory policies: “I don’t accept the whole idea that the role of one party is somehow to moderate the other. The Conservative Party, under my leadership, has changed. It is a new and different Conservative Party.” That statement is crammed with falsehood, paying no attention to the fact that the Liberal Party – whatever alliances it has embroiled itself in, however it has re-shaped its name – has not been a nationally considerable political force for some ninety years. Their typical response, when their real situation became too distasteful, was to gorge themselves on fantasy.

Steel
One notable addict of that variety of political narcosis was David Steel who was Liberal leader between July 1976 and July 1988 and who, perhaps as consolation for joining the ranks of failed leaders of his party, was in 1997 transformed into Baron Steel of Aikwood. During his time in charge he did a favour to James Callaghan’s ailing Labour government by joining a pact to keep them in power in return for being consulted on some aspects of policy. That arrangement fell apart with Thatcher’s 1979 victory but Steel became excited again by the scent of power in 1981 when the Gang of Four broke from the Labour Party and, in spite of his former gruesomely futile expedition into such territory, he felt encouraged to join a SDP/Liberal Alliance. Here, he thought, was at last a real chance of worming his way into a position of fame and influence which would get the cameras watching him striding along Downing Street smiling at the reporters’ cheeky questions, then emerging from the black door to issue some history-making declaration to the waiting world.

There was some encouragement in such dreams by the opinion polls which indicated that the despair about the previous Labour government was widespread and deep enough to give the Alliance a realistic hope of success. Steel was impressed enough by this to bellow at the 1981 Liberal Assembly that party members should “…go back to your constituencies and prepare for government”. And when the ecstatic uproar caused by that historically embarrassing, desperately forgettable, blunder had died away there was Thatcher and the war in the Falklands and a smashing win for the Tories in 1983 and the virtual death of the Alliance and all its dreams and nightmares.

Conservatives
None of this, nor of the other such disasters, seems to have influenced Clegg – nor Alexander and the others – when Cameron offered them the chance of again living the dream denied to their party’s previous leaders. Indeed the early attitude of the likes of Vince Cable and David Laws gave the impression that they were satisfied they had made the right choice, working for policies which they knew would adversely affect the lives of masses of people – workers, children, the elderly and the sick… We know now that situation has changed; there is a dominant Conservative Party (now condemned by Cable as “…ruthless, calculating and thoroughly tribal”) which may calculate on being in power for a period comparable to Thatcher’s. During last year’s general election we were promised, especially by Clegg who was suffering from a kind of hysteria arising from his ecstatic TV ratings, a New Style of Politics. The elections this year exposed that lie but there is a way to go before the end of any politics, old or new, signalling the end of this entire rotten system in which reality is swamped in toxic fantasy.