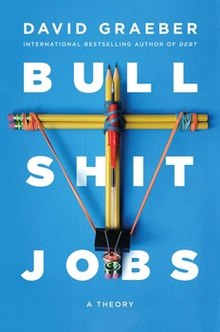 Socialists often refer to the fact that so many jobs under capitalism are useless in terms of satisfying people’s needs. Everything to do with banks, insurance and accounting falls into this category, as do the armed forces, courts and prisons, bailiffs, advertising and so on.

But here David Graeber takes this idea much further, with the idea of a bullshit job: ‘a form of paid employment that is so completely pointless, unnecessary, or pernicious that even the employee cannot justify its existence even though, as part of the conditions of employment, the employee feels obliged to pretend that this is not the case.’ Such jobs are mostly white collar, and one survey showed that 37 per cent of workers felt that their job did not ‘make a meaningful contribution to the world’. Jobs which are unpleasant and badly paid, but which need to be done, are not bullshit jobs but rather are characterised as ‘shit jobs’.

Much of Graeber’s evidence is taken from email and other responses to his requests for examples of bullshit jobs from workers performing them, and he quotes at length from these accounts. The jobs themselves are of various kinds, including flunky jobs (designed to make someone else feel important), duct tapers (who solve problems that should not really exist) and box tickers (who allow an organisation to claim it is doing something which in fact it is not). Such jobs often lead to increased stress and anxiety, while more meaningful work may be done in a more collaborative way. Moreover, the more a job benefits others, the less the worker is likely to be paid (though of course there are many exceptions to this).

Although it is hard to quantify, the number and proportion of bullshit jobs appears to be increasing, and Graeber attributes this primarily to what he terms ‘managerial feudalism’, a concept which seems to mean that managers want more power and so more underlings to make them feel and appear important. He also cites a remark made by Barack Obama, that rationalising the US health care system would lead to the problem of what to do with the millions who work for medical insurance companies: in effect admitting that they are not doing useful work at all, but then wondering how they would otherwise be employed.

The final chapter contains a proposal for a universal basic income, but the book’s interest lies in the earlier chapters, where a great deal is said about the reality for so many of employment under capitalism. One worker in a bullshit job is quoted as follows: ‘I consider a worthwhile job to be one that fulfills a preexisting need, or creates a product or service that people hadn’t thought of, that somehow enhances and improves their lives. I believe we passed the point where most jobs were these type of jobs a long time ago.’ Indeed, and it would be straightforward to make work more satisfying and to reduce working hours, while still producing enough to meet human need. 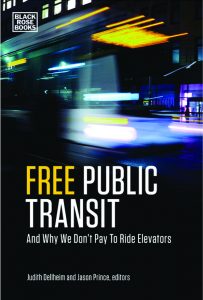 As the subtitle suggests, it is not the idea that people should be able to travel for free from one part of a city or town to another that is odd but that they should have to pay to do this. They wouldn’t have to in socialism but in a number of places this is not the case under capitalism either. Fares-free public transport for all users exists, we are told, ‘in as many as 97 cities and towns worldwide’ (56 in Europe, 27 in the US, 11 in Brazil, 2 in China and 1 in Australia). Partial free transport, where a section of the population such as pensioners can travel without paying is much more widespread.

The book, made up of articles by various authors, covers the subject comprehensively, both past struggles and current arrangements. It begins with the free transport policy introduced in Bologna, in Italy, for a while in the 1970s and covers failures, as in Montreal and Toronto, as well as successes, including Tallinn, the capital of Estonia, the biggest place to have introduced it.

The authors approach the subject from an ideological point of view, seeing free transport not just as an answer to the pollution and congestion caused by private cars, but as a move towards a change of society, writing of ‘socio-ecological transformation’ and ‘decommodifying public services.’ However, where it has been introduced, this has been more for more pragmatic reasons. In the US the driving force has often been ‘downtown’ businesses wanting to encourage customers to visit their stores. In France schemes are partly financed by a tax on employers, who benefit from not having to include an element for travel to and from work in the wages they pay. In some small towns it has been a cost-saving exercise as, given the relatively small number of users, it has proved cheaper to subsidise the service from local taxes than to erect a superstructure to charge and collect fares.

Since under capitalism money has to be found to pay for everything, how free transport is funded is a big issue. Various ways have been advocated or implemented – national or regional subsidies from general taxation, local taxes, one author here suggests a tax on land values near stations and bus stops.

The ideologically-motivated campaigners have often ended up relegating free transport for all (let alone socialism) to a long-term aim and concentrating on obtaining it only for disadvantaged groups as ‘transport justice’, clearly a reform to capitalism’s poor law system rather than a step towards a change of society. As reforms go, not having to pay for local public transport is unobjectionable, even of benefit to workers, but it’s not a step towards free access for all, although it does show that there is nothing unfeasible about this given the common ownership and democratic control of the means of life. 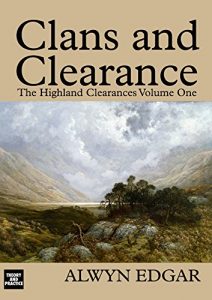 Clans and Clearance. The Highland Clearances Volume One. By Alwyn Edgar. Theory and Practice. 2019.

In his introduction to this 700-page tome, Alwyn Edgar explains that he first became interested over fifty years ago in the Scottish Highlands and how they came to be depopulated but that he has only now got round to turning his research and notes into a book. Four more volumes are to follow.

In this volume he examines the origin and nature of the clan system as it existed up until 1750 and exposes some of the popular misconceptions about it, for instance that it was overpopulation that led to the later mass emigration from the area to the slums and industries of Glasgow and to North America and New Zealand and that the highlanders were Catholics (he produces figures to show that they were 96 percent Protestant).

We will have to wait for Volume Three to see his analysis of the clearances in the first half of the nineteenth-century by the Duchess of Sutherland, notorious throughout the world thanks to Marx’s mention of them in chapter 27 of Capital on ‘The Expropriation of the Agricultural Population’ as an example of what was required to allow capitalist development to take off.