Pathfinders: Getting Out Of The Fast Lane

Getting Out Of The Fast Lane

If you’re a driver, you probably know that it’s a bad idea to put Meatloaf’s Bat Out Of Hell on your car stereo when driving down the motorway. Before you know it, you will be ramming pedal to the metal in the fast lane with a crazed ‘death or glory’ look on your face, earning yourself a speeding ticket at best and a funeral at worst.

You will often have asked yourself why they bother to make cars that can do 120mph when there’s nowhere apart from racetracks or the German autobahn that you’re allowed to drive at that speed. Because speed is a selling point, even if you can’t use it. We take it for granted that speed is good, and that the need for speed is limitless. The UK government is spending around £90-100bn on a new high-speed rail link between London and Birmingham because the old Victorian coastal lines are so winding and serpentine that they seriously limit the speed of even the modern tilting Pendolino trains. A century of urban development and infrastructure is built around these lines so straightening them out would involve demolishing and rebuilding half the country, and thus unthinkable. 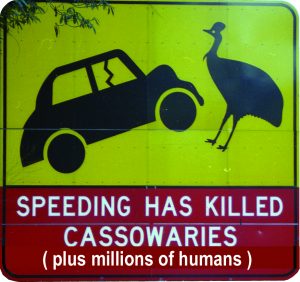 But why does anyone need to get to Birmingham so fast anyway? So we can have 200-mile commutes in 90 minutes? So Birmingham can become a dormitory province of North London? The government claims it’s to regenerate the North, but the BBC barely ever mentions the North and most politicians probably don’t even know where it is.

But never mind all that. The rail link is fast, and everyone knows fast is good.

Just like Just In Time delivery. Who wants to pay for expensive warehousing space when you can order tomorrow’s supplies at close of business today and get it hefted up the motorway overnight for delivery at 9am? Magic capitalist solution! Who cares about the petrol costs, the customer will pay those. Environmental costs? Bugger them, they’re just externalities we don’t need to worry about. JIT is the key to online shopping success too. But what about all that new inner-city congestion and traffic fumes from all those fleets of competing delivery vans all parking illegally because minimum-wage drivers have to do 80 deliveries a day and don’t have time to find proper parking spaces? Not to worry, that’s just their choice to work in the gig economy, and it looks great for the government’s employment figures too.

And then there’s Just Eat. Who wants to go to the tedious labour of cooking one’s own food, or even going out of the house to get a takeaway, when you can get someone to drive it right to your door? Environmental/social objections? Nonsense, see above.

Speed is good, it created the modern world. And what can we do with the time we save? Work harder, buy faster, die quicker, and make the rich richer!

But wait, let’s all take a chill pill and consider this idea. What if socialism was all about slow? Once we’ve abolished the anarchic casino of the market system, which periodically lurches from slump into boom and then into slump again, we can have a sensible, steady-state economy. Without capitalism’s endless speculator frenzy there’s no reason for demand to go up and down like a demented yo-yo, so production can be smooth, sustainable, predictable and largely automated.

So where’s the rush? Speed is just stress. Speed is unnecessary accidents. Speed is not looking at anything as you pass by, not appreciating what is around you. All the really good things in life are better if you take time over them, so why not life itself?

With predictable production comes predictable supply. There’s no need to rush things up the motorway by juggernaut at the last minute. An expanded rail service would make better sense, or even, dare we suggest such a steampunk notion, a rebuilt canal system? It doesn’t matter if materials only move at 6 miles an hour if they arrive at the factory every day, as they did in the eighteenth century when the UK’s canals, laid end to end, would have spanned the Atlantic to America.

If you don’t mind contemplating slow, you can easily think of other slow examples. As with everything else in socialism, transport and travelling would be free. But does it have to be fast? Why hurry, why not just take your time and enjoy the sights? Don’t laugh, but many companies right now are working on new safety technologies for airships, which don’t use dangerous hydrogen but perfectly-safe helium (‘How airships could return to our crowded skies’, BBC, 8 November – bbc.in/36XNx7D). There are many advantages to airships over jet planes, notably safety, fuel economy and heavy freight haulage. And even though they’re slow, they’ll still outrun a Maserati in top gear, believe it or not. If capitalism is contemplating bringing back this 1930s technology, it’s not at all preposterous for socialists to consider it too.

In socialism you won’t want, or have to, zoom up the motorway or HS2 link for 200 miles to get to work. As work will be voluntary anyway, you’ll find something you can do in your local area, within comfortable walking distance, or work online. If you can’t, you can move somewhere else without the worry of rents, mortgages or desirable catchment areas for your kids. You probably won’t need to cook very often because it makes no sense to waste collective time and resources cooking separately when you could take turns cooking together in free community kitchens.

Life is meant to be enjoyed, not endured, and that is best done slowly and at leisure. The only need for speed that socialism has is right now, in capitalism, which we urgently need to kill off before it finally spins out of the fast lane and kills us all in the burning wreckage of the planet.