In Marx’s day the doctrine that the government should not interfere in the operation of the capitalist economy was known as ‘Manchesterism’ after the city in the north of England where capitalist industry was then most developed and whose capitalists wanted to be free to pursue profits as they thought fit.

Its advocates preached ‘free trade’ (the abolition of tariffs on imported goods and bounties on exported goods) and letting market forces operate freely. They even opposed laws against adulteration and to limit the hours of work of those they employed. Also known as ‘economic liberalism’, it had roots in the eighteenth century in French manufacturers and merchants who told the royal bureaucracy to leave them alone and let them get on with their business (‘laissez faire’) and in Adam Smith’s curious theory that behind market forces was some ‘invisible hand’ ensuring that these operated for the common good. 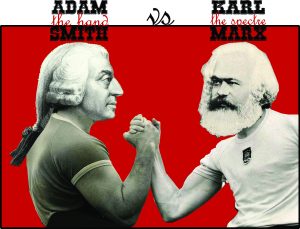 However, a practical problem soon arose over industries and services which all capitalist businesses had to make use of, such as transport (roads, canals, railways) and communications (post, telegraph). Capitalists did not want these to be in the hands of any one group of their number who would thereby be in a position to hold the rest of them to ransom and charge monopoly prices. This was why in Britain, as early as 1844, a Railways Act contained a clause providing, if need be, for state ownership, so-called ‘nationalisation.’ In Europe railways had been in the hands of the state almost from the beginning because of their strategic importance for transporting troops in times of war. In the event Britain settled for price regulation by the government, which was also a violation of laissez faire.

Economic liberalism never caught on in its entirety outside Britain as ‘free trade’ was seen, not without justification, by rival capitalists in other countries as a means of giving British capitalists a competitive advantage. They demanded that their governments ‘protect’ them from such competition through tariffs on imported British goods. Beyond that, however, they embraced the doctrine that governments should not interfere with their pursuit of profits.

Between the two world wars of the last century even Britain abandoned free trade and the gold standard. An era of government-created fiat money opened up, in which governments had to pursue an interventionist policy to manage their currency. With the financial crash of 1929 and the big slump in production that followed, governments also came under pressure to intervene in the capitalist economy to try to get it expanding again. ‘Public works’ programmes were initiated, such as Roosevelt’s New Deal in the USA and Hitler’s rearmament in Germany. In his 1936 General Theory of Employment, Interest and Income the British economist John Maynard Keynes provided a theoretical justification for such ad-hoc schemes. He argued that left to itself – laissez faire – capitalism would not necessarily recover from a slump of its own accord, as economists had preached till then, but that government intervention, in the form of a tax policy to stimulate demand was required. In the event of a boom, this could be prevented from ending in a slump, as booms had previously always done, by the government pursing the opposite policy of using taxes to discourage consumption. Thanks to government intervention, steady capitalist expansion could be engineered.

Naturally this theory, especially stimulating demand in a slump by redistributing purchasing power from the rich to the non-rich, was acclaimed by reformists as a justification for the reforms they already favoured. Those that had still regarded themselves as in the Marxist tradition abandoned Marx for Keynes.

Keynesianism was not consciously pursued as a government policy till the beginning of the Second World War. When that war was not followed by a slump, as the end of the First World War had been, but by a 25-year period of capitalist expansion with only minor ‘recessions,’ many open supporters of capitalism hailed Keynes for having saved capitalism.

But this was an illusion. Put to the test when the post-war boom came to an end in the 1970s, Keynesian policies resulted in what was called ‘stagflation’ – a rise in the general price level while the economy remained stagnant. The post-war boom had been caused by other factors such as reconstruction and the spontaneous expansion of internal and world markets.

The end of the post-war boom led to what was called a ‘fiscal crisis of the capitalist state’. Governments depend for what they spend on levying taxes, which ultimately fall on capitalist profits, and on borrowing money from those who have it. With less profit being made, there was less to tax and less to borrow. Government had no alternative but to cut their spending rather than increasing it as Keynes had advocated they should do to get out of a slump. Another economic theory was required to replace Keynesianism and justify this.

The new theory, popularised by the American economist Milton Friedman, called itself ‘monetarism’ as it advocated a tight monetary policy, i.e. cutting government spending, and letting market forces revive the capitalist economy by restoring profitability of its own accord as asset prices and real wages fell. This was not really a new theory but a revival of pre-Keynesian economic liberalism.

There is some justification, then, for calling this replacement policy ‘neo-liberalism.’ What is not justified is seeing its application as a free choice on the part the part of governments. It was something imposed on them by the workings of the capitalist economy, given the situation it was in. Governments had no choice but to apply it. In other words, capitalism was the cause, with neo-liberalism merely the political and ideological justification.

What the capitalist conditions imposed was that governments should cut their spending or, rather, cut taxing profits with the result that they had less to spend. With less to spend, ‘austerity’ was the order of the day in all countries irrespective of the political colour of their government. It was not just Reagan and Thatcher in the USA and Britain but also Mitterrand in France. Public services were cut back. ‘Welfare’ and ‘benefits’ were slashed, especially for those who for one reason or another were not able to find a job. Since the economists preached that there was a so-called ‘natural rate of unemployment,’ which could be as high as 6 percent, millions of already poor people had their standard of living reduced even further. Other reforms enacted during the post-war boom were whittled away or rolled back.

To reduce their borrowing, governments sold off state assets to private capitalist firms, who were granted the right to make profits from them in return for themselves raising the capital to finance them.

As a policy of trying to ensure steady sustained capitalist development, neo-liberalism has been just as much a failure as Keynesianism was, as spectacularly shown by the Crash of 2008 and the Great Recession that followed. What this showed is that, no matter what policy governments adopt, capitalism goes relentlessly on its way, repeatedly going through the boom/slump cycle that it has done since the 1820s. The fact is that governments do not – cannot – control the way the capitalist economy works. It is the other way round. It is the operation of capitalism that constrains what governments do; all they can do is little more than react to what capitalism throws at them. There is a sense in which they do have a choice. They could choose to try to defy what capitalism’s economic forces dictate but, if they do, they will make matters worse. As Marx pointed out with regard to banking legislation, while governments cannot make things better, they can make things worse:

‘Ignorant and confused banking laws, such as those of 1844-5, may intensify the monetary crisis. But no bank legislation can abolish crises themselves’ (Capital, Volume 3, Chapter 30, Penguin Books edition, p. 621). 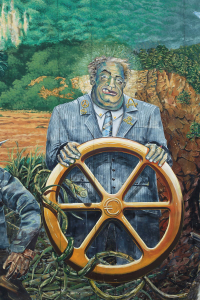 by government intervention to spend money to end austerity and get capitalism expanding again – a revival of Keynes’s discredited idea that could be called ‘neo-Keynesianism.’ As Marxists know, both from the past experience of such attempts and from a knowledge of how capitalism works, this is doomed to fail and would make things worse.

It is not neo-liberalism that is the problem, but capitalism. It is not a change of policy that is required, but a change of socio-economic system.