Credit and Control in China

One consequence of new technology has been a vast increase in the extent of surveillance of people, whether by the state or private companies. CCTV, facial recognition, tracking the use of debit and credit cards, having access to phone records, cookies and other ways of recording a person’s use of social networks and the rest of the internet: all this shows how much information (often using big data and processed by artificial intelligence) is held about people. The ways in which this information can be used vary enormously, but nearly all relate to controlling behaviour or influencing opinions or making profits. The term ‘surveillance capitalism’ has been used by some to describe the way people are observed and tracked.

Hardly anywhere, though, is the extent of information and the degree of control greater than in China, where the ‘social credit’ system is widely used. In a sense this is rather like the idea of credit scores in the UK and elsewhere, which provide a numerical statement of how likely a person is to repay money they owe. If you have a low score, you will probably find it difficult to borrow money, take out a credit card or have a mortgage; and even if you are able to do these things, you are likely to be charged a higher interest rate. Providing credit scores has become an industry in its own right.

Part of what happens in China is rather similar, with people being given a social credit score by various private companies. There are also some local government schemes which rely on ‘good deeds’ such as donating to charity or giving blood and on bad ones such as going through a red light, and increase or reduce your score as a result. But there are also much grander plans for a system run at national and governmental level, though this is not planned to come into existence until some time in 2020, and it is not even clear if that deadline will be met. A Chinese State Council document from 2014 described the social credit system as ‘an important component of the Socialist market economic system and the social governance system … its reward and punishment mechanisms are incentivizing trustworthiness and restricting untrustworthiness’. Despite what is sometimes claimed, though, social credit is not as yet an all-pervasive system that intrudes into everyone’s daily life to snoop on what they’ve been up to.

People can be blacklisted in a number of ways. For instance, the journalist Liu Hu writes about censorship and government corruption. Apart from being fined, he was banned from flying and using some train lines, without being informed in advance. A similar ban on travel by plane or train affects several million people. It is possible to pay the fine or whatever the court demands in such cases, and so theoretically be removed from any blacklist, but this does not always happen in practice, especially as there is little supervision of the Chinese legal system.

Various kinds of infraction, many of them pretty trivial, are covered, such as smoking in a no-smoking part of a train, spending too much time playing video games, posting fake news, quarrelling with neighbours or walking your dog without a lead. In contrast, being a ‘good citizen’ can earn you discounts on energy bills and even boost your profile on a dating site. The supposed intention is to combat corruption and fraud, but of course what is done goes well beyond anything that could be relevant to that. For instance, people’s mobile phone usage is closely tracked. And there are supposedly 200 million surveillance cameras in China, which can snoop on people’s activities.

The system is part of a much wider move towards greater repression, 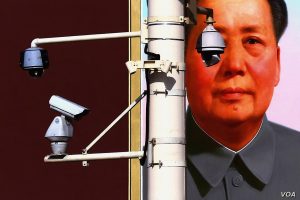 such as those against Uighurs in Xinjiang, Tibetans and the protests in Hong Kong. Xi Jinping has removed limits on the terms of office of the president, so could in theory remain in charge for life. Human Rights Watch has recently referred to ‘increasing repression under Xi’s rule’, including the jailing of journalists, academics, religious teachers, protestors against sexual harassment and others. In addition to keeping tabs on individuals, there are also mechanisms for tracking what companies do, supposedly to cut down on fraud and ensure compliance with the law. Overseas companies operating in China may have to conform to even more governmental requirements too.

Overall, and however much it is fully implemented in the future, the social credit system is designed to keep Chinese workers on the straight and narrow, penalising anyone who steps out of line. Any resistance to the rule of the ‘Communist’ Party and the ruling capitalist class will be one of many actions that lead to being penalised in one way or another.