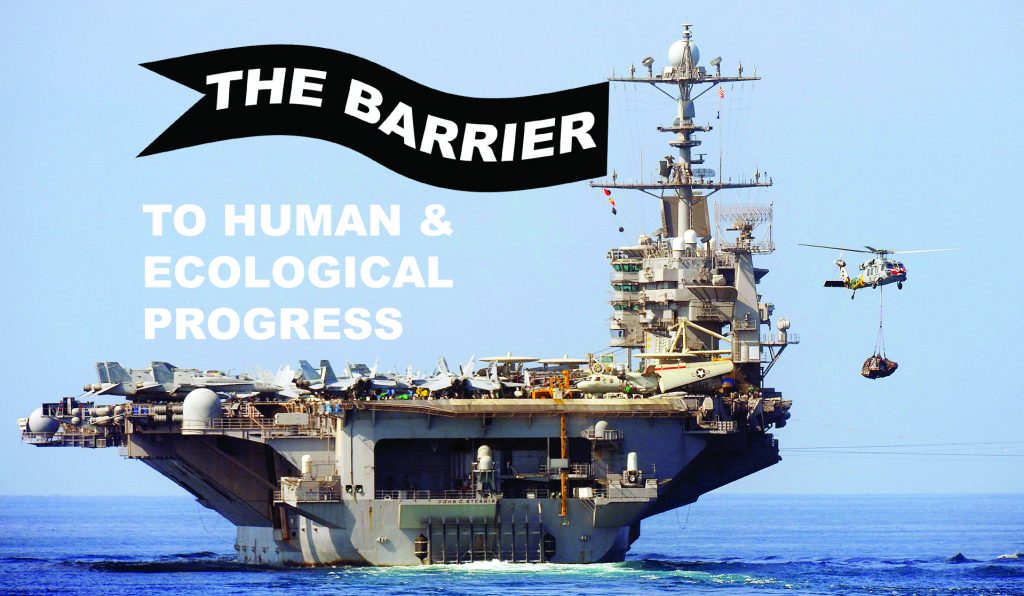 UN Secretary-General António Guterres stated, ‘we are in trouble. We are in deep trouble with climate change,’ and that, ‘It is hard to overstate the urgency of our situation… we are still not doing enough, nor moving fast enough, to prevent irreversible and catastrophic climate disruption.’ This statement came alongside the news that emissions had risen to a new high in 2018 after 30 years of supposedly attempting to cut them.

Can we adapt to the inevitable effects of ‘catastrophic climate disruption’ under the capitalist system? Or, is it a barrier to a sustainable future fit for the good of all?

We need three basic elements to sustain life: food, water and shelter. When our species emerged around 300,000 years ago we maintained ourselves as hunter-gatherers. This period lasted for 90 percent of human history. Co-operation was crucial for our survival.

Chattel slavery and the concept of private property emerged before written history with basic agriculture and the production of surpluses. People became property, and the state evolved to defend property rights through the use of coercion. Between the ninth and fifteenth century in medieval Europe, the shackles of slavery gave way to feudal society and the legalised bondage of serfdom wherein the three basics for life were exchanged for service and labour on the land.

Capitalism arguably dates from the sixteenth century and flourished at the expense of feudalism’s inability to adapt. The central characteristics of capitalism are: private ownership of the means of production, profit, waged labour, the accumulation of capital, prices, and competitive markets.

As elites arose in slavery and feudalism, so too did the unequal division of food, water, and shelter for the vast majority of its people. Capitalism has mirrored that, as Oxfam reports that the ‘World’s 26 richest people own as much as the poorest 50 percent’. Whereas, the UN Food and Agriculture Organisation revealed that the food system fails to properly nourish billions of people: ‘More than 820 million people went hungry last year, while a third of all people did not get enough vitamins. Approximately 9 million people die of hunger globally each year’.

And water? ‘At least 2 billion people use a drinking water source contaminated with faeces… Nearly two million children a year die for want of clean water and proper sanitation… The UN Development Programme argues that 1.1 billion people do not have safe water and 2.6 billion suffer from inadequate sewerage. This is not because of water scarcity but poverty, inequality and government failure.’

These are symptoms of a cancer called poverty. A sickness intrinsic to capitalism. The question to ask yourself here is: are these people likely to be joined by millions more given what we know, at present, about the effects of ‘catastrophic climate disruption’ under capitalism?

Politicians, the media, and entrepreneurs scrabble around for quick fixes. All of them involve market solutions. But the logic of the capitalist market is to make money. Thus, catastrophe can also be seen as an opportunity to turn a profit.

Bloomberg reports that, ‘A top JP Morgan Asset Management strategist advised clients that sea-level rise was so inevitable that there was likely a lot of opportunity for investing in sea-wall construction’. And speculating on insurance policies, Barney Schauble, of Nephila Advisors LLC believes that, ‘the broader public’s failure to appreciate the risks of climate change is part of what makes it such a good area for investing’. Moreover, ‘there is evidence that many players in the corporate-military-security industrial nexus are already seeing climate change not just as a threat but an opportunity… climate change promises another financial boon to add to the ongoing War on Terror.’

Technology we are told will eventually provide solutions to climate change. This is a crude phantasm of an ideology that seeks to forego any alternative thinking and to ‘kick the can down the road.’

The ‘green new deal’ appears in several shades of grey. Whether the so-called, ‘war-time mobilisation’ some people call for could be realised in one country is debatable. But globally? That would take cooperation on a scale inconceivable given that in the twentieth century The League of Nations, and later the UN, were implemented to maintain peace. Nevertheless, countless millions were slaughtered in capitalism’s wars.

And now? Consider the debacle that is Brexit. And the farce of climate change conferences.

Co-operatives and similar types of enterprises are argued for as solutions. But as long as markets exist they too have to conform to their iron laws. Co-operatives will have to compete with each other to buy raw materials and inputs, and then sell its commodities on the market with every other seller of an equal product. Thus, if a cooperative produces goods to sell on the market, to obtain money, to pay wages via profit, then it has to conform to all of the economic laws of capitalism.

Profit is capitalism’s raison d’être, and growth its imperative.

The quote, ‘it is easier to imagine the end of the world than the end of capitalism,’ becomes credible with the knowledge that, ‘just 100 companies are responsible for 71 percent of global emissions,’ many of which are state entities and the residue potent friends of state actors. Likewise, ‘the U.S. Military is the World’s Biggest Polluter.’ All powerful adversaries of anyone who wants to oppose the status quo.

But those who think this barrier can be overcome have one great advantage. Imagination. The ability to envision a different world. One that’s fit for the good of all. To imagine it, clarify it, and start to build it. And those that believe the barrier could be breached should begin by inscribing on their banners the dictum – ‘Toward One World.’