Wood for the Trees: The Myth of Parliament 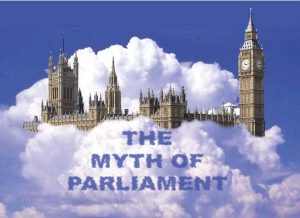 Watching the recent dramas broadcast from Westminster one would be forgiven for thinking that it represented the heart of political activity in this country. The participants are all convinced that as ‘representatives’ of their constituents it is they who decide the future of us all. This conceit is widely believed and, of course, the legislators and executives of the state do have an important, if exaggerated, effect on all our lives.

How have so many become so convinced that this sideshow is somehow the alpha and omega of political activity? To answer this we have to understand the history of the conversion of wealth into political power. Parliament is primarily about getting and spending money to preserve the wealth and power of the elite class. The two houses of parliament are not there, despite all the propaganda, to preserve the rights of ‘the people’ but to curtail their rights. How could such a paradox arise and why do the majority not recognise it as such?

Originally the King called upon an assembly or parliament of respectable property owners to organise and legislate for the taxes he needed to finance the military activity that defined kingship. Inevitably this caused tension and dissent among the already impoverished majority together with the wealthier emerging middle class, and the king always found a great reluctance in parliament to raise taxes without some kind of consent from and representation for those who paid the taxes. After years of riots and revolts it all came to a head in 1628 with the ‘Petition of Right’ which sought to make laws prohibiting the king from demanding arbitrary taxes without the consent of parliament. The king promptly ‘prorogued’ parliament (sound familiar?) which started the build–up to the English Revolution in 1642.

The growing bourgeoisie or capitalist class, whose wealth now rivalled that of the nobility, decided that a parliamentary coup would be their route to political power. After an attempted counter-revolution in 1688 they consolidated their power and took over the state using parliament as their executive voice. The bourgeoisie could now concentrate on what they did best – exploit the labour of their fellow humans for profit. They left the running of the state to underlings and those who took to politics as a career. There were, and still are, two main duties for MPs: raise taxes to run the state as cheaply as possible and make laws to secure the property of the capitalist class.

In 1799 ‘income tax’ was introduced and in contrast to the preceding land tax it gave the impression that the exploited majority were paying it instead of their employers. This deception made it appear that the working class had an incentive to keep taxes low in common with their masters. From then on it became a priority to minimise ‘public spending’ to keep taxation low. However, later in the nineteenth century it became clear that capitalism was failing to keep the working class in an even minimal state of health and this was obviously hurting profits. Bismarck was one of the first European statesmen to recognise this and together with his fear of a growing ‘socialist’ party he was motivated to introduce a form of welfare state. Although this placated many, as with all state spending, it was always kept under pressure by the need to keep taxes down.

Soon, in many capitalist states, the majority of the infrastructure was taken under government control along with welfare services. Leftist political parties adopted state or public ownership as some perverse form of socialism forgetting its origins as a cheap way for the capitalists to finance the infrastructure of the state by sharing its costs. To this day the ideological battle between left and right centres on the argument about levels of government investment in the state (seen as benefitting the majority and stimulating economic activity) or minimising public spending and letting the market decide by privatising and deregulating former state-owned industries/services. It has become a matter of ideological dogma and faith on both sides – ignoring the fact that both originated from the needs of capital and not labour.

Socialists find such a debate meaningless from a working class perspective. The present Brexit furore is a typical example of the anachronistic debates that we see in today’s hopelessly arcane parliament. Socialists and the class we represent have no interest in whether we’re exploited by European capitalists or those in the US and we certainly don’t give a flying fig about the internecine struggle within the ruling class concerning their contrasting economic interests.

All of the rhetoric about democracy, national self–determination, labour rights, cultural identity and emigration is merely hyperbole disguising sordid greed. The interminable manipulation of procedure and legislation underlines just how inappropriate the esoteric rituals of parliament are in a twenty-first century global capitalist context. Not until the majority recognise that real democracy is only possible when the production of the means of life are taken into common ownership will debate become a meaningful reality to which they will all personally contribute; the squabbles between ex-public schoolboys about how they can best add to the wealth left to them by their daddies will be long gone.