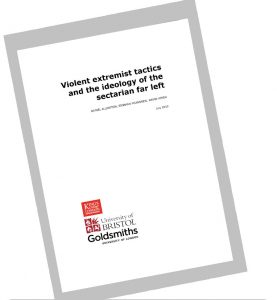 Lovers of 1970s TV will remember Citizen Smith, he of the mythical Tooting Popular Front, exhorting his comrades to ‘smash the state’. Dave Spart still does the same in Private Eye, forever hitting out at the ‘running-dog lackeys of US imperialism’.

With the resurgence of terrorism inspired by fundamentalist religion and also the far right, three academics have now decided to take a look at those on the far left and their attitudes to terrorism and violence. Their research project was funded by a grant from the UK Commission for Countering Extremism, set up by Theresa May’s government in 2017 in the wake of the Manchester bombing.

Their primary data generation took place with help from polling company YouGov’s online panel of respondents – with those who self-identified as ‘very left-wing’ being of particular interest. They found that while people who self-identify as being very left-wing are more likely to be sympathetic to violent extremism in some shape or form than the general population, it was still only a view held by a minority (29 percent as opposed to 9 percent more generally). Most of the other results of the research are perhaps not generally surprising, including the estimate that an elderly woman in the very left-wing category is far less likely to show sympathy for any of the types of political violence listed than a young man in the same category (9 percent as opposed to 56 percent).

One of the more interesting questions they looked at was what respondents said when asked to identify the countries they think are the ‘greatest threat to world peace’. In the general population sample, Russia was top followed by North Korea and the United States. In the very left-wing sample, the US was top, followed by Russia and then Israel. The placement of Russia in the top three was clearly less expected by the researchers as it doesn’t slot as neatly into the traditional left-wing pantheon of ‘imperialist’ states, and presumably features largely because it is both authoritarian and aggressive about this in ways that would not find favour on the left (including attitudes to women, gay rights, etc).

In carrying out this research, the writers needed a good understanding of what might be termed the ideological components of the far left, in particular Leninism. Indeed, the first chapter is a deconstruction of Leninist theory that is very accurate in the main, including its identification of why Leninists of various stripes historically take ‘anti-imperialist’ positions that end up leading them towards either open or tacit support for terrorist organisations like the Provisional IRA, Hamas, etc.

There is one minor caveat to this though, in that given the current media coverage of anti-semitism and anti-zionism on the left, the writers seem keen to integrate this into their analysis – and perhaps a little too keen. There can be little doubt that the rise of the internet and the conspiracy theories promulgated there has led the far right and the far left to borrow ideas and ‘tropes’ from one another, often with some of their perhaps less sophisticated and more naive advocates not always realising their origin. Nevertheless, it is historically accurate to say that anti-semitism emanates from the political far right as it is a theory of racial supremacy, whereas anti-zionism emanates from the far left as part of its ‘anti-imperialist’ perspective, with Israel effectively being seen as the aircraft-carrier in the Middle East for the world’s dominant imperialist power (the US).

This paper does not make the distinction between the two clear enough and seems to imply that Leninists are often anti-semites without actually realising they are, simply because of the association they make between imperialism and ‘finance capital’, with the connotations the latter sometimes has with supposed Jewish cabals. But to be fair, we could add that what is often forgotten is that so many founders of Leninism were themselves of Jewish origin (Trotsky, Zinoviev, Kamenev, etc) that the Bolshevik revolution was denounced by countless numbers – including Churchill – as a Jewish plot of some sort. In the UK since, many of the leading figures in the Communist Party of Great Britain have been Jewish, as were the leaders of what became the SWP, Tony Cliff (Ygael Gluckstein) and Militant, Ted Grant (Isaac Blanc), among a great many others.

Irrespective of this issue, though, we would contend that their illogical belief as Leninists that an enemy of an enemy must be a friend as well as their inherent authoritarianism make them unfit enough to be genuine advocates of ‘power to the people’. 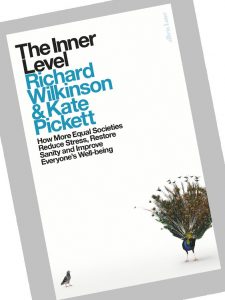 A decade ago the authors wrote The Spirit Level (discussed in the Socialist Standard for June 2009 and December 2010). There they showed how countries with higher levels of inequality also had more problems such as shorter life expectancy, more obese people and less social mobility. In this new book they extend their analysis to mental and psychological issues (see their website www.equalitytrust.org.uk for more information).

The main claim is that problems with a social gradient (those which are more common as you go down the social hierarchy, e.g. in terms of income) are more severe in more unequal societies. Thus the incidence of schizophrenia per head of population is higher in countries that exhibit greater inequality (almost three times as high in Brazil as in France, for instance). The more unequal US states have higher levels of depression. Generally, a greater degree of inequality can result in more social anxiety, which may itself be responsible for more problem gambling and risky alcohol consumption. Higher inequality can also make people more narcissistic, with an exaggeratedly positive view of themselves, which may again be related to social anxiety. More unequal countries show more bullying by children, fewer visits to art galleries and museums, and less civic participation (belonging to clubs of various kinds).

Inequality, then, is a bad thing, but it has not been a permanent feature of society: ‘throughout most of our specifically human prehistory, we lived in extraordinarily egalitarian hunting and gathering societies, in which food was shared and goods were passed between people’. Hunter-gatherers had no dominance hierarchy, and there were social constraints on alpha-male tendencies. It was the rise of agriculture that was probably responsible for the development of inequality. The social hierarchy which exists today is not the result of natural differences in people’s abilities; rather, any such differences are a product of this hierarchy since, for instance, the number of years spent in poverty can affect a child’s intellectual development.

As in The Spirit Level, Wilkinson and Pickett argue for a more egalitarian social system, or at least one where the degree of inequality roughly corresponds to that in the currently less unequal countries, where the incomes of the richest fifth are ‘only’ about four times higher than those of the poorest fifth. They argue that co-operatives and employee-owned companies can contribute to this and to the aim of a more environmentally sustainable society, with the challenge being ‘to improve well-being without growth’. There would be an end to consumerism, which is itself driven by status insecurity, and to wasteful consumption. The demands of work would be reduced, with greater leisure and so better health, both mental and physical.

The book is very informative about the extent and consequences of inequality, but achieving all that the authors envisage in a society still based on employment and production for profit would be a real pipedream. 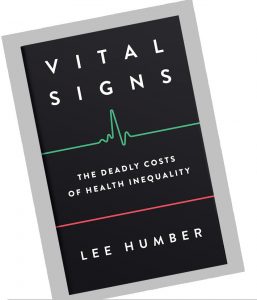 What determines the health of an individual or of a whole population? Is it the healthcare they receive, or is it more to do with the conditions in which they live? Humber’s answer is that it is very much the ‘social determinants of health’ that affect a person’s wellbeing and life expectancy. Biomedical models focus on a person’s relationship with disease and the expertise of the medical profession, but a more multifaceted approach also looks at factors such as polluted air, overcrowded households, diet, and the pressures of employment.

Of course this does not mean that the kind of healthcare received is beside the point. One claim is that cuts in UK government health spending resulted in 45,000 more deaths among those over sixty between 2010 and 2014. In the US almost twice as much as a proportion of GDP is spent on healthcare than in the UK, yet life expectancy is several years less. About half of Americans can only afford the most basic health insurance, and 45,000 die each year because they lack health coverage. In spite of the importance of diet, GPs rarely ask patients about it.

One chapter is a critique of the ‘inequality thesis’ as set out by various authors. Humber claims that they rely too much on subjective notions such as status and social trust, and pay insufficient attention to social factors such as the quality of food. This overlooks the fact that Wilkinson and Pickett in particular rely on inequality of income as the crucial point, and there is no reason why an inequality-based approach and one looking at other societal factors cannot be combined.

It lacks an overall theme, and does not emphasis inequality as much as the subtitle might suggest, but Humber’s book gives a good picture of the deleterious effects of what others have termed the ‘medical–industrial complex’.