Who would benefit from a no deal Brexit? 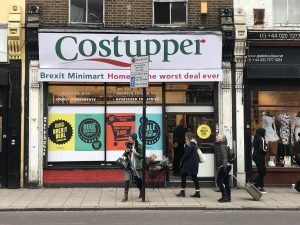 The British state risks subordination like never before to the interests of global capitalism. If the UK were to have a ‘no-deal’ or ‘hard’ Brexit, it would change the face of British capitalism.

But the question does remain an ‘if’. As we go to press attempts are still being made to leave with a deal, especially after the opposition parties got together, just before Boris Johnson’s suspension of parliament/, to pass a law to block no-deal. Even so Michael Gove, the minister in charge of Brexit arrangements, has made it clear that the British government is operating under the assumption that a deal will not be struck.

It is worth asking, then, who actually wants no-deal?

Corbyn, in an article for the Independent (26 August), described no-deal as a ‘bankers’ Brexit’, serving the interests of this powerful group primarily. This isn’t to say that no-deal would benefit the capitalist class as such – no-deal is more likely to be driven by nationalism than simple economic gain. The Daily Telegraph and other mainstream media outlets condemned this as just left-wing ideology, noting that bankers were originally in favour of remaining in the EU. However, other publications, such as the Financial Times, have reported some recent shift of bankers’ views to favour a no-deal Brexit, and more so since Johnson’s premiership.

The potential effects on the economy are worth considering.

No-deal would, if Bank of England reports are to be believed, risk recession. This might, in a way, favour some sections of the capitalist class – regulations could be dismantled and business take the helm more firmly, as is the inevitable to-ing and fro-ing in a capitalist economy.

On the other hand, some businesses have already started asking for handouts from the government, such as the food and finance industries. The food industries are going further, demanding exemption from competition laws so that they may collude. In all likelihood, the capitalist principle of ‘privatise profits, socialise losses’ will prevail.

There are also numerous other consequences to no-deal, leaving aside the domestic affairs. America has been the most forthcoming in stating its willingness to make a deal with the UK: President Trump has repeatedly expressed his enthusiasm about the current government. He has maintained that the UK may have to leave without a deal, saying ‘the European Union is very tough to make a deal with – just ask Theresa May.’ Johnson has said that he looks to make a ‘comprehensive deal with the US’. Other potential trade partners include Brazil, currently the site of major ecological damage. The British government is still, however, vying for the EU’s favour. British-European trade may carry on despite tariffs (most likely dictated by the EU, not the UK).

In this case, the UK would be jumping from the frying pan into the fire. All its trade deals would no longer be made through the EU, but based on World Trade Organisation rules. No-deal is also sometimes called ‘leaving on WTO rules.’. This would mean drawing up individual ‘schedules’ (lists of quotas, tariffs, and concessions for goods and services) for every WTO member the UK trades with. Britain would have to negotiate any trade deals on its own. As Britain would not have the bargaining power of the EU, British capitalism, under these circumstances, would most likely take on a much more American face. The interests of star-spangled industry would be catered to by British government more attentively.

No-deal has, however, been criticised by both right and left. The former Chancellor of the Exchequer, Philip Hammond, has said that there was no mandate for leaving the European Union without a deal. The previous Prime Minister, Theresa May, attempted to get a deal approved three times, each attempt ending in failure. Some people argue that leaving the EU without a deal is an expression of the democratic will expressed in 2016. Often, these people are supporters of the party which has stymied parliament.

Global capitalism is strengthening its hold on British society, seemingly subverting systems of democracy to do so. The government will probably drift further into right-wing populism. It is unclear what the precise effects on the electorate will be, but disillusionment with the liberal order is more likely than ever.

Economic and political strife can be the spur to consciousness, if the moment is seized. Marx’s old mole of revolution burrows close to the surface once more. The opportunity to make the case for the socialist alternative is clear.