The ‘hang ’em and flog ’em’ brigade goes into overdrive

Boris Johnson strides into the room with his sidekick Priti Patel grinning effusively alongside him. It could be an audition for the next Bond movie, with Boris cast in the role of the mad scientist and Priti as his sinister and glamourous assistant. But in fact these characters are the UK’s new – and already beleaguered – Prime Minister and his pristine Home Secretary. And this is not a film set, but rather the inaugural meeting of the National Policing Board; a cunning little invention by the former Home Secretary, Sajid Javid, to usher the UK a step nearer to a national police force and thus provide one more brick in the wall in the inexorable construction of a more policed state.

Priti Patel wasted no time in setting out her stall; a message in very few words: ‘tough on crime! tough on crime! and tough on crime!’ Haven’t we heard this somewhere before? It has been the mantra of a long line of her predecessors; including Michael Howard, Jack Straw, Theresa May and Amber Rudd, to name but a few. It has also been deployed by an array of world leaders in the form of Trump, Bolsanaro, Duterte and others; all engaging in the same trite rhetoric in order to whip their public into a state of fear and frenzy, rather than adopting a more thoughtful approach to social order.

Who is Priti Patel?

Anyone who was hoping that the UK’s first Asian woman Home Secretary might bring a feminine, multi-cultural perspective to the role will be disappointed. It’s hardly surprising given that Priti Patel’s self-proclaimed idol was Margaret Thatcher. Priti is from similar stock as the Iron Lady; both sets of parents were shopkeepers and both women vehemently supported the death penalty, until recently when Priti has back-tracked from this position.

An enthusiastic proponent of law and order for everyone else, Priti Patel does not demonstrate the same zeal in regard to her own conduct. In 2017 she was forced to resign as International Development Secretary following the disclosure that she had secret meetings with a variety of Israeli politicians; contrary to the Ministerial Code and without informing her boss, the then Foreign Secretary, Boris Johnson. No sooner had Priti got her feet under the table at the Home Office than it was revealed that she was working for Viasat, a US corporation with contracts to supply the UK Ministry of Defence. This was a breach of the Ministerial Code in that she had failed to seek guidance from the Advisory Committee on Business Appointments (ACOBA) before accepting the position; which, as a Strategic Adviser, apparently involves her in five hours per month at a rate of £1,000 per hour. ACOBA, seemingly without reference to the dictionary to remind them of the meaning of ‘integrity’ and ‘public service,’ gave retrospective approval to the contract with the proviso that Priti does not engage in behaviour that might assist Viasat and thus compromise her position as a government minister. 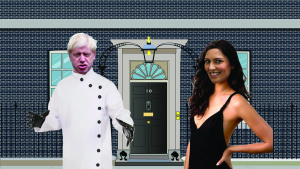 Not that such associations are anything new to her. Before entering politics Priti was a PR executive servicing corporate clients such as British American Tobacco. Subsequent to her entry into politics she lobbied for ‘light touch regulation’ for both the tobacco and the alcohol industries. The revolving door keeps spinning. Recently she was a significant player in the Brexit campaign, on one occasion advocating threatening the Republic of Ireland with food shortages to hasten its cooperation with the UK’s exit from the EU; afterwards stating that her remarks were ‘taken out of context.’

The ‘big idea’ for fighting crime

By way of a little elaboration on her ‘tough on crime’ slogan, Priti Patel explained that it involves: ‘zero tolerance’ and ‘making criminals feel terror on the streets.’ In order to achieve this she intends to: increase police numbers by 20,000 (reversing the 20,000 reduction in police officers carried out by the Tories in the past 10 years) ; build more prisons; lock people up for longer; carry out more surveillance on the public; relax controls on stop and search and secure the UK’s borders. In relation to drugs she, of course, wants to wage war against those who use them; castigating the police for turning a blind eye to 9 out of 10 culprits caught growing or using cannabis. Boris Johnson chipped in for good measure stating that there were two vitally important things that his government will do for the police: it will give them the legal protection and also the political protection to do their jobs. Effectively the same dog whistle that Trump, Bolsanaro, Duterte et al used, signalling to the police and security forces that they will have the government’s backing to do what is ‘necessary;’ whilst insulating them from legal accountability and protecting them from any parliamentary backlash.

No matter that fifteen racial equality organisations, in an open letter to the Home Secretary, reminded her that research has shown that stop and search doesn’t work and is counter-productive to racial and community relations (see: bit.ly/2kNpBAA). No matter that the UK already has the largest per capita prison population in Europe and that endless published research has demonstrated that locking more people up for longer doesn’t work. No matter that a recent Amnesty report said that: ‘the UK is leading a Europe-wide race to the bottom with Orwellian counter-terrorism measures that seriously threaten human rights and are amongst the most draconian in Europe’. (bit.ly/2jkfL3Z). No, none of this evidence matters to Boris, Priti and co. They are not ones to allow the facts to get in the way of politics, especially when careers are at stake and a general election is around the corner.

As if these stupefying ideas were not enough to send sane people running to the asylum, much more madness is in the pipeline in the name of crushing crime. Priti will no doubt be hastening along the recent ‘initiative’ of the London Metropolitan Police in its use of data from the 2,500 Transport for London cameras in order to deliver real-time facial recognition on every motorist entering London. And she will welcome the £5 million of extra funding given to West Midlands Police to continue trials of the National Data Analytics Solution (NDAS). The NDAS has so far isolated almost 1,400 ‘indicators’ of future criminality in a population sample of five million, analysing more than a thousand gigabytes’ worth of data using artificial intelligence from local and national police databases. Soon the police will have the capability to pull in data from the 6 million CCTV cameras around the UK, courtesy of private companies such as Facewatch. We are all potential criminals now in the eyes of an increasingly paranoid state and Priti Patel’s stance on law and order perfectly encapsulates this pathology.

Have any UK politicians ever tried to do things differently in relation to law and order than this facile claptrap? Once upon a time two Tory Home Secretaries, Douglas Hurd and Ken Clarke, attempted to introduce a more nuanced approach to tackling crime, but they were soon ousted for offending against their party’s hang ’em and flog ’ em mentality. The previous Labour leader Tony Blair invoked the slogan: ‘tough on crime, tough on the causes of crime’ and followed through on the rhetoric by creating 4,300 new criminal offences; almost one for every day of the 13 years that New Labour was in power. What might we expect in the increasingly unlikely event of a Corbyn–led Labour government? Its latest manifesto announces that Labour will be: ‘tough on crime and tough on the causes of crime’. Not much new there then. It goes on to declare its support for the police in doing its job; proposes to increase police number by 10,000; (short change compared to the Tories’ 20,000) ; and promises to properly secure the UK’s borders (labour.org.uk/manifesto/safer-communities/). It would be unfair to measure the difference between Labour and Tory policies on crime as the width of a single cigarette paper. It might be as much as two.

What would ‘law and order’ look like in socialism?

To begin with there would be no need to ‘secure our borders’ as there wouldn’t be any. Socialism is a world system where there are no political or economic boundaries, where people are free to travel anywhere they wish. With no borders there would be no need for the concentration camps springing up around the UK and in much of Europe and the world; incarcerating thousands of migrants in degrading and inhumane conditions; detained indefinitely, their crime being that they are poor and destitute and effectively stateless. This abolition of borders would extinguish the crime perpetrated by national governments and the private prison corporations on these defenceless people. Without borders there can be no nation states. Without nation states there can be no war; thus the huge amount of crime – murder, torture, rape, environmental destruction etc. – associated with war will cease.

Socialism will be a society of equals where everyone’s basic needs for food, health care, housing and fulfilling work are satisfied; a society that will promote cooperation and harmony instead of competition. In the absence of the misery and deprivation created under capitalism it is inconceivable that crime would continue unabated.

But socialism will not merely reduce crime it will reduce the need for law itself. In socialism the means and instruments for producing and distributing wealth will be held in common for the use and benefit of everyone and placed under democratic control. Under such conditions the system of law that provides a pillar of the superstructure of capitalism – the enforcement of private property rights, facilitating accumulation of wealth and exchange through the money system and regulating the labour relationship – will be redundant, as will the coercive state which administers it.

But capitalist law is not the totality of law and a society without any enforceable norms of behaviour would amount to a kind of tyranny of the individual and, as such, would not meet the definition of a civilised society. Socially-useful rules regulating human relationships and our relationship with the broader environment will persist in socialism. Enforceable rules and regulations which prohibit certain conduct towards environmental destruction and such things as violence, rape, drunk driving, child abuse and similar will continue in a socialist society, but its purpose will be to serve the interests of society as a whole, not the capitalist class. Such rules and regulations will be conceived and administered by members of the community as part of its democratic structures and adjudicated by ordinary people, perhaps through an expansion of the jury system, or similar. They will not be punitive, but rather restorative and rehabilitative to facilitate social inclusion.

The message to Priti Patel is clear. If she is serious about reducing crime she should become a socialist.