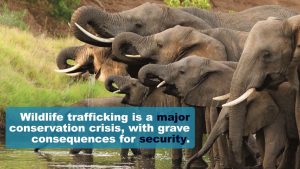 In July this year, police forces in over a hundred countries detained nearly six hundred people in an operation aimed at wildlife smuggling, and seized over fifteen thousand animals in the process. ‘It is vital that we stop criminals from putting livelihoods, security, economies and the sustainability of our planet at risk by illegally exploiting wild flora and fauna,’ said the secretary general of CITES (Convention on International Trade in Endangered Species).

After drugs and weapons, the trafficking of animals and their ‘derivatives’ is the third most valuable illegal trade in the world. It may be worth up to $10bn a year, though its illicit nature means that estimates are only approximate. Its prime motivation, of course, is profit, supported mainly by conspicuous consumption or display of trafficked goods.

The Caribbean, with its rich biodiversity, is one of many places from which animals are smuggled. Many smuggled animals are taken to China, where animal products are used in traditional medicine. Despite claims about turning the country into an ‘ecological civilisation’, and banning the domestic trade in ivory, the trade in rhino horn and tiger bone was recently reopened, though supposedly under strict controls. This relaxation was postponed after protests, but the situation remains uncertain. Tiger farms in China hold over six thousand animals, but there are very few rhinos, and the demand for rhino horn in China is mainly met from South Africa, where private ranches hold at least seven thousand rhinos. Demand and profits were also increased massively when a myth began to circulate in Vietnam that rhino horn could cure cancer.

To emphasise the link between trafficking humans and trafficking animals, it is often the same cartels who control both kinds of smuggling from Latin America into the US. But as clamping down on security at the US–Mexico border has increased, smugglers turn elsewhere. In 2017 over one-third of illegal animals seized in the US had come from Indonesia.

Exotic pets can be smuggled to wealthy owners who want a kind of status symbol. They may be transported in appalling conditions in order to get past customs checks, such as infant snakes being shipped in CD cases. Many die on the journey, or are vary badly treated by dealers in the destination country, or even by their eventual owners, who often abandon them after a few months.

Apart from the suffering of the animals concerned, what other kind of impact does all this have? For one thing, many people in the poorest countries depend on wild animals for food, and poaching and smuggling can reduce their food supply. Invasive species sometimes have a devastating effect on local ecology, such as Burmese pythons let loose by their owners in the Florida Everglades. Trapping and poaching can incidentally kill other species as well, for example in traps. Some non-traditional pets can have diseases that spread to humans, such as the herpes B virus and salmonellosis.

CITES is an international agreement that came into force in 1975, but countries only enter into it voluntarily, though it becomes legally binding once they do so. Yet that does not mean that it has much effect in practice. In some US states, for instance, the Fish and Wildlife Service has no officers to inspect wildlife shipments. Many smugglers who are caught just pay the fines and carry on smuggling, seeing the fines as part of the cost of doing business. Animals probably come near the bottom of capitalism’s priorities in terms of protecting the victims of crime.

And people who want ‘exotic pets’ or furs as some kind of status symbol could well look at themselves and ask if they really need such items.