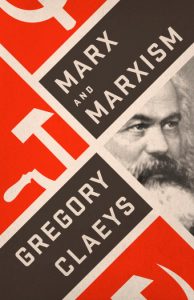 It is a tribute to the continuing relevance of Marx’s ideas that books about him and them are still being published. Claeys’s is divided into two parts, the first on Marx, the second on ‘Marxism’ but which is in fact on Leninism.

Since socialists accept Marx’s basic ideas – his materialist and class approach to history, his analysis of the capitalist economic system, and his advocacy of the need to win political power to change the basis of society – how Marx came to these is of some interest. However, the details of his private life – that, for instance, he was irascible and didn’t suffer fools (or those he considered fools) gladly – are only marginal and of no guide whatsoever as to how a socialist working class majority in control of political power would behave.

The intellectual journey which led to Marx becoming a socialist is more relevant but not crucial. After all, he is only one socialist amongst many and few (none in fact) are likely to follow the same route, i.e., via German idealist philosophy. Claeys’s treatment of this is reasonable and he does raise some issues which socialists still debate, such as to what extent are humans social by biological nature (i.e, is human nature ‘good’ and not merely neutral?) and whether the socialist case against capitalism is based on a morality as well as class interest (Marx certainly denounced capitalism’s treatment of workers in a distinctly moral terminology).

In a bid to partially acquit Marx of the charge of utopianism, even millenarianism, Claeys places too much emphasis on what Marx wrote about producer cooperatives, at one point even seeming to suggest that Marx envisaged capitalism coming to an end through the spread of cooperative societies. In fact, while Marx was not opposed to workers forming them any more than he was to them forming trade unions, his main point was that they showed that production does not require a private owner to be carried out; producers can organise this themselves. He did not envisage socialism as a system of separate cooperatives producing for the market but as being a sort of nation-wide cooperative producing directly for use.

Apart from 20 pages on pre-WW1 Social Democracy, Part Two is of no interest. It reads like a hastily written description of what Lenin and Leninists did when in power. Lenin’s defining difference with Marx was his theory of the vanguard party, not only to seize power as a minority but to hold it dictatorially as the self-appointed representative and sole interpreter of the interest of the working class. This contrasted, both in theory and in practice, with what Claeys previously referred to as ‘Marx’s account of a fully class-conscious revolution led by a democratically organised majority’ (page 249).

Leninism is a quite different theoretical system from Marx’s. There is, however, a historical question that needs explaining: how a theory of state-capitalist development under a totalitarian single party should have come to be associated with Marx when it clearly had nothing of substance in common with what Marx as a socialist advocated? A subject for some aspiring Ph.D student. 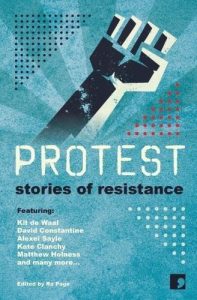 Here is an interesting idea: twenty short stories, each dealing with an example of resistance and accompanied by an afterword. The stories range from the Peasants’ Revolt of 1381 to the demonstration against the Iraq war in 2003, though most deal with the twentieth century. The afterwords are by a variety of authors, from historians to activists, and deal with various different issues. Most of the examples discussed are fairly well known, but some will be familiar to fewer people, such as the Radical War or Scottish Insurrection in 1820 and the National Blind March of 1920.

In his introduction, the editor notes that the stories are not about leaders or heroes but the ‘ordinary’ participants, about whom history usually has little to say. The only real exception is one scene dealing with a visit by Malcolm X to Smethwick in 1965, shortly before his assassination (this is based on a real event). A small amount is known about Andrew White, the central character in Laura Hird’s fine story of the Radical War: he was transported to Australia but later returned to Britain and probably became an active Chartist.

Three participants in that rising were executed, and state brutality is one aspect of the book. Michelle Green makes very vivid the trauma of suffragette prisoners being force-fed: the doctor ‘finds the gap … left by my treacherous missing tooth , and the steel jaws open with each turn of the screw, forcing bare the softness of my throat’. There were spies and agents provocateurs at Pentrich in 1817, and police violence at the Poll Tax demo in 1990.

A natural question to ask is how successful the various protests were. The Blind Persons Act of 1920, following from the March, did lead to improvements in the lives of blind people, and the repeal in 2003 of the notorious anti-gay Section 28 happened after a great deal of LGBT protest (though, as Em Temple-Malt says in her afterword, it probably also came after social attitudes had changed). At the end of Martyn Bedford’s story on the Miners’ Strike, one character says that the miners won, as you only lose if you don’t fight. But it is hard to see how the strike and the suffering and bitterness it caused resulted in success in any way.

Many of the stories emphasise the importance of co-operation and solidarity, but sadly also reveal how many struggles within capitalism do not deliver what was hoped for. 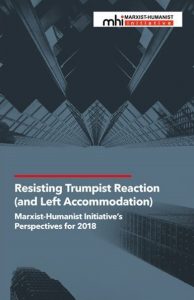 This is an odd pamphlet from a group entitling itself ‘Marxist’ in that it argues that workers should vote for a ‘centrist neo-liberal’ to stop Trump being re-elected in 2020 just as it says that they should have voted for Hillary Clinton in 2016.

The pamphlet claims that the position Marx took up of supporting the North in the US Civil War and the separation of Ireland from Britain vindicates their position. Marx supported the one to hasten capitalist development in America and the other to undermine the power of the landed aristocracy in Britain, both issues long since settled by history and of no relevance today.

Their argument is that Marx also had in mind that both would free workers from ‘supremacist’ ideas – racism and anti-Irish prejudice. Maybe (not that it did) but this would not imply voting for the Democratic Party today. That’s not going to change anything. Rather would it suggest some other way of overcoming the prejudices of Trump voters. Such as a straightforward campaign to explain that their problems are caused by capitalism and that it is their interest to unite with other workers to establish the common ownership and democratic control of the means of life. A message that should be equally directed at Democratic Party voters. 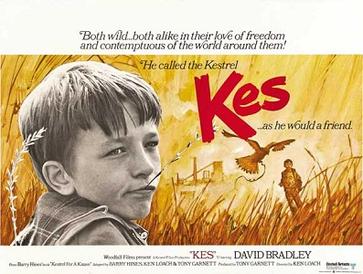 Washington DC was preparing for its bombastic military parade. It seems the US president had been inspired by his new friend in Pyongyang. Meanwhile, a few thousand miles to the east, another more modest, though worthwhile, procession took place through the streets of Hoyland Common, Barnsley.

Led by a brass band an invited group walked from the Saville Square pub where they’d assembled along a short route to an unassuming terraced house. The occasion was the unveiling of a blue plaque honouring Barry Hines, the author of A Kestrel for a Knave. Written in the 1960s, it became the film Kes directed by Ken Loach who took part in this event.

The honour of unveiling the plaque fell to Barry’s surviving brother who delivered a short speech about how the son of a South Yorkshire miner came to write the book that made his name. Speeches concluded and, following a final couple of tunes, instruments returned to their cases, it was time to return to the Saville Square for lunch.

In the foyer of the pub stood a full-size fibreglass version of the bronze statue, sculpted by Graham Ibbeson, which is to stand in Barnsley in Barry Hines’ honour. The money for this has been raised through a vigorous funding campaign led by Ronnie Steele and a dedicated group of volunteers. Beginning in January 2018, through a mix of crowd funding, the sale of bronze maquettes and live public performances by an eclectic mix of musicians, the statue has been cast and paid for.

It depicts the central character of the story, young Billy Casper, his arm extended with the kestrel perched on his hand. It presently stands in Barnsley’s new library, but the group intend that eventually it will stand on a plinth outside for all to see. Ronnie Steele gave a brief speech of thanks to all involved before declaring the buffet open. While people ate there were songs by performers Dave Cherry and Del Scott Millar, and Celtic-style traditional music by Barnsdale Hood.

There are a few political points to be drawn from this event. Common arguments against socialism are that people will not work for free and, as people are naturally greedy, free access to resources will result in people taking far more than they need.

The many, actually uncounted, hours of often quite tedious work by Ronnie Steele and his group to organise the campaign and events was entirely voluntary. The performers who gave their time to play at those events did so unpaid. All they required was a shared objective.

The buffet itself was greatly over-catered. However, people did not eat more than they wanted, each more than capable of deciding when enough was sufficient and then stopping. People had to be almost pleaded with to take remaining food away and then no one scooped up armfuls. Just a paper plate or two for family or friends who would appreciate the largesse.

And this is very much in the context of capitalism where selfish individualism is supposedly the driving force behind how people act. While this is not socialism of itself, it is a glimpse of possibility, that people without state or company direction can organise and act in a social way.

The world of mining communities as depicted by Barry Hines has gone, but the potential of the working class remains, if still largely untapped.