Capitalism and Climate Change: Cause and effect 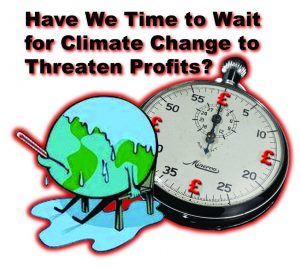 The argument he made was that in order to mitigate risks (not doing anything about climate change rendered a risk to profitability, rather than dealing with the problem being a genuine social priority), capitalist businesses will have to move their focus from where we are today, to where we need to be tomorrow. Perhaps this wooliness doesn’t placate your concerns? Well, Carney went further in arguing that the financial sector had a prominent role to play in this switchover, whereby funds will be withheld from businesses that are unable to move with the times and prioritise climate change.

When probed by Snow, Carney reiterated that capitalist businesses which ignored climate change would go bankrupt ‘100 percent’. While you could argue that an incumbent business which completely disregarded climate change could plant the seeds of their own long-term demise, the ‘100 percent’ route to bankruptcy is by a capitalist ignoring profitability.  Carney would most probably respond that, as climate change poses a ‘risk’ to long-term profitability, capitalist businesses will be forced to prioritise the mitigation of climate change. However, surely the Governor cannot believe that other ‘risks’ of not making a profit are simply going to make way for the prioritisation of the environment?

Leaving aside Brexit and the US-China dispute, let us consider a few contemporary ‘risks’ prioritised by financial institutions. Argentina, for example, faces yet another sovereign debt collapse. Once perceived as an emerging market with relatively wide investment margins, its borrowings from western financial institutions soon proved to be unsustainable. Rather than allowing for an accountability of failure on behalf of banks and investors, the Argentinian government has been provided with multiple large IMF bailouts. Only months since a $7.1 billion IMF loan, Argentina’s dollar-denominated sovereign debts appear on the precipice of default as the strongly IMF backed incumbent government came second in primary elections, resulting in a 25 percent devaluation of the peso and a stock market collapse.

In Malaysia, Goldman Sachs has promised to ‘vigorously defend’ itself against state prosecutors who claim that senior bankers and domestic politicians alike had embezzled state investment funds, defrauding investors in the process. Does any of this inspire confidence that the financial sector can lead a gilt-edged defence of the environment? Not when such unprofitable investments in loans are bailed out and fraud and embezzlement are vigorously defended. Capital that risks disappearing because a sovereign state borrower is unable to repay the loan cannot be protected by central banks and monetary funds indefinitely, but they will be defended as long as possible at whatever social cost. The idea that investments in loans that are not ‘profitable’ will lead to an immediate risk to bankruptcy or to a redirecting of capital into sustainable and socially acceptable ends is an age-old laissez-faire myth.

As per usual with liberal economics, climate change has been reduced to an economic abstraction in an effort to plead for the capitalist system. Can we afford to wait for climate change to pose the biggest risk to capitalist profits? Are central banks and the IMF going to allow financial institutions to go ‘bankrupt’ if they continue to make loans that turn out to be unprofitable investments, as Carney insists?  Is it likely that in the immediate future climate change will overtake the quarterly demands of investors? How long will it take to simply wait for the profitability of environmentally-damaging goods to slowly deplete?

Can we afford to wait? The answer of course, is no. Environmental groups must no longer prioritise the achievement of empty emissions promises from politicians on behalf of financiers and capitalists. The socialist response is to advocate a system based on common ownership and economic democracy which can prioritise social need, rather than the ability to make profits and if not, to defend unprofitable investments at any social cost.