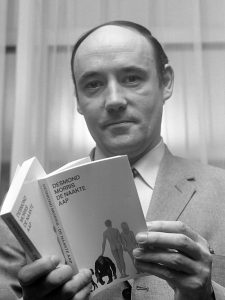 Perhaps the most famous of scientific frauds was the fake Piltdown Skull of 1910, a “missing link” fabricated by a person unknown. That anonymous joker put together an ape’s jaw with a human skull. Desmond Morris has grafted the most ignorant fairy tales about human society onto a body of basically sound ideas about human biological evolution. The Naked Ape is a barefaced hoax.

As a gimmick, Morris pretends to describe the human animal just as it would be pictured by a zoologist if it were a newly-discovered species. “Naked ape” is a clinical term (like “black-footed squirrel”) which is supposed to denote men’s most noticeable characteristics: their lack of fur. But evidently, Morris has become a rich man because to millions of his readers, nudity is a novelty. It should be obvious that the most important thing about human animals is not that they are naked, but that they are clothed. In other words, they produce what they consume; they turn the artificial into the necessary, and (like Morris) sometimes confuse it with the natural.

His book is a hymn of praise to modern capitalism. All the current practices, preoccupations, superstitions, myths and manners are, according to Morris, highly admirable. Furthermore, they are natural because they stem from man’s past as a wolf-like, monogamous, predatory killer.

the UK becomes a cashless society and does not educate children on the concept of paying for things, a maths professor has warned. Many children are failing to grasp the concept of exchanging money for goods because they have never seen their parents or carers handing over coins or notes to a cashier, warned Dr Jennie Golding, at the UCL Institute of Education.’ (i paper, 15 June)

Why would this be a problem if Adam Smith was right about humans having a ‘propensity to truck, barter and exchange one thing for another’? But wait till we have socialism when we will all be ‘financially illiterate’ and adults, let alone children, won’t know what a cash machine was or what paying for something online means.

They still don’t get it

‘Working-class values like hard work should be rewarded with decent pay and security. The Government should concentrate on rebuilding working-class jobs with decent pay’ (Frances O’Grady, TUC General Secretary, i paper, 10 August).

It must be nearly two hundred years since the slogan ‘a fair day’s wage for a fair day’s work’ was first raised and it’s over 150 years since Marx urged English trade unions to abandon that ‘conservative motto’ for the ‘the revolutionary watchword, Abolition of the wages system.’ Maybe the C in TUC stands for ‘conservative’.

‘For most people, health has little to do with healthcare. It is genetically and socially determined, and in a country like the U.K. with high levels of child poverty and income inequality, the consequence is a 10-year gap in life expectancy between rich and poor, and a 20-year difference in healthy years lived.’ (M.D., Private Eye, 9 August).