The conquest of scarcity

Aaron Bastani, co-founder and senior editor at the alternative media organisation Novara Media, argues in his book Fully Automated Luxury Communism (published by Verso this month) that current technological advances are on the way toward overcoming scarcity and making ‘luxury communism’ – a society of abundance for all – possible for the first time. What Marx foresaw as the hypothetical result of further development of the productive forces is now rapidly turning into reality. On this basic point, the author is in full agreement with the World Socialist Movement, although there is scope for debate over exactly when a society of abundance became or will become possible.

In Section I of the book Bastani provides an overview of social development, with an emphasis on three great turning points or ‘disruptions’ – the first associated with the birth of agriculture, the second with the emergence of machine industry, and the third with the new information-based technologies whose inherent tendency (because ‘information wants to be free’) is to give rise to ‘fully automated luxury communism’, or FALC.

Section II is by far the best argued and most valuable part of the book. Its five chapters are devoted to each of the spheres of technology that are playing major roles in the ‘third disruption’:

automation – not only of manual labour but also of many intellectual activities;

‘mining the sky’ – that is, extracting resources from heavenly bodies (initially, the moon and near-earth asteroids);

genetic engineering to ‘edit’ disease-related segments out of the human genome;

Developments in these spheres are set to create ‘extreme supply’ and thereby banish scarcity in labour, energy, resources, healthcare and nutrition, respectively. At the same time, they point the way toward improving the environment, mitigating global warming, coping with demographic trends like an ageing population and ending cruelty to animals.

More attention might have been given to the potential risks as well as benefits of the new technologies. One wonders about plans to pull a passing mineral-rich asteroid into earth orbit for ease of access, and whether a miscalculation might send it hurtling down and crashing into the Earth. One wonders about proposals to remove disease-related segments from the human genome, and whether the ‘editors’ might inadvertently remove genetic material that performs essential functions for the organism.

Bastani acknowledges that the emergence of the technological preconditions for communism will not be enough in itself to bring the new society into existence. The political preconditions are just as essential. In the absence of a vast popular movement for communism, some at least of the new technologies are indeed likely to widen social inequalities. For instance, automation could well generate mass unemployment on a scale hitherto unknown, while benefits to health and longevity from human genetic engineering will accrue mostly to the wealthy.

Thus Section III of the book focuses on how to build up a popular movement for FALC. Like most left-wing writers, the author aims to achieve revolutionary change by promoting reforms rather than by directly spreading revolutionary ideas, his unspoken expectation being that ordinary people will not be receptive to such ideas. However, some of his reform proposals do have the merit of prefiguring the new society. In particular, he is critical of the demand for a Universal Basic Income, preferring to campaign instead for the expansion of Universal Basic Services – that is, freely available public services like healthcare, transport, education and information.

Especially from the point of view of readers in other countries, the singular focus on British politics is unfortunate. It is unclear whether he fully appreciates the need to organise for communism at the global level – a need dictated by the global nature of capitalism itself.

Perhaps the author’s concept of communism is a little simplistic. The new society will not necessarily be fully automated. Even if near-complete automation is technically possible, people may well prefer not to implement it. They may choose to automate only work that is boring and unpleasant while preserving human activities that are – or can be made to be – interesting and satisfying. Partial automation (PALC not FALC) may be accompanied by a revival of handicrafts, assisted as convenient by high-tech gadgets. 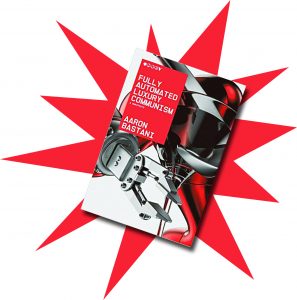 impact of climate chaos and the prospects for rapidly restoring the planet’s ecosphere. No doubt the falling price of solar energy facilitates the transition away from fossil fuels, but the oil, gas and coal bosses are still able to hold back this process by various means, such as using their political clout to block or eliminate state subsidies for renewables while maximising state subsidies for fossil fuel companies. And how much more damage will terrestrial mining do to our environment by the time mining is moved off-planet? Even when we do achieve communism the ‘paradise’ promised in the title of Section III may not be within reach any time soon.