The Socialist Party stood a list in the South East Region in last month’s elections to the European Parliament. Our list obtained 3,505 votes. Here is the address of one of our candidates, Mike Foster, to a husting in Banbury.

Our viewpoint is different to those of other parties, in that we’re neutral on the issue of Britain staying in or leaving the European Union. This is because either option doesn’t work in the best interests of the vast majority of people. Whether laws are made in Westminster or Brussels, they’re still made to try and manage a social system which is inherently divisive and wasteful. And whether it’s easier or harder for companies in Britain to trade with those in Europe, that trade will still push most wealth towards the elite. So, a vote for the Socialist Party is a vote to say that you’ve had enough not only of the Brexit debate, but also the system as a whole.

The overwhelming majority of us –well over 90 per cent – don’t own much in the big scheme of things and can only get what we can afford through our wages, savings or state subsidies. If we’re able to find employment, we get our money by selling our time and our abilities to an employer. But collectively, we don’t get back out all that we put in. According to Oxfam, 82 per cent of the wealth generated in 2017 went to the richest 1 per cent of the global population, while the 3.7 billion people who make up the poorest half of the world saw no increase in their wealth. The elite who own the world’s organisations cream off a profit or a surplus for themselves by exploiting the rest of us. So, many of us end up in unfulfilling jobs for organisations which we have little real input into how they’re run.

The elite’s economic power is backed up by political power. States, and blocs such as the European Union, exist to try and manage the status quo. This doesn’t mean that they have control over the economy, though. Market forces fluctuate between growth and slump regardless of what politicians and corporate strategists of any nationality or political stance want. Instead, they’re more likely to be playing catch-up and trying to keep things financially viable in a shaky economy. This applies whether we’re in or out of Europe, or whether the company we work for is British, German, Japanese or based wherever.

We in the Socialist Party don’t think that this system can be changed to work in the interests of most of us because it’s structured to put the majority at a disadvantage. Reforms or increased public spending may help some people in the short-term. But these measures, however well-intentioned, only last as long as they’re financially viable or politically acceptable. The needs and wishes of the majority of people, or the environment, aren’t as important as the economy.

Leaving the EU won’t solve problems such as poverty or climate change, nor would they have been solved if we’d voted to remain. In fact, the whole Brexit debate is a distraction from society’s more fundamental problems, and along the way has stirred up divisions such as xenophobia and racism. The Socialist Party says that these issues have to be addressed at their source. This means changing from a social system with the means to produce and distribute wealth owned by a minority, to one where those resources and facilities are owned and managed by everyone in common. Then, goods would be produced and services would be run directly for anyone who wants them, without the dictates of the economic market. This doesn’t mean that resources would be squandered. Our present society is much more wasteful, not only in its exploitation of the environment, but also in the effort and energy used up by the bureaucracy of pushing money around. The new world we advocate would be able to manage our natural resources in a sustainable way, as the waste and short-term profitability which lead to environmental damage wouldn’t be there.

The only legitimate and practical way this could be achieved is by the vast majority organising together, democratically. This would mean a much broader and more inclusive style of democracy than we’re used to today. Different democratic organisations or procedures would apply in different circumstances, rather than having leaders or groups with more authority than others. It would be a society based on voluntary, co-operative work, with decisions and responsibilities agreed through everyone involved having an equal say.

So, the Socialist Party says that we should aim for a different kind of society, rather than trying to patch up this one, in or out of the EU. We’re not advocating ways of navigating the withdrawal deal, nor saying that we should have remained. A vote for the Socialist Party is a vote to say that you’re fed up with the divisive system we’re living under, and want a free and equal world instead. 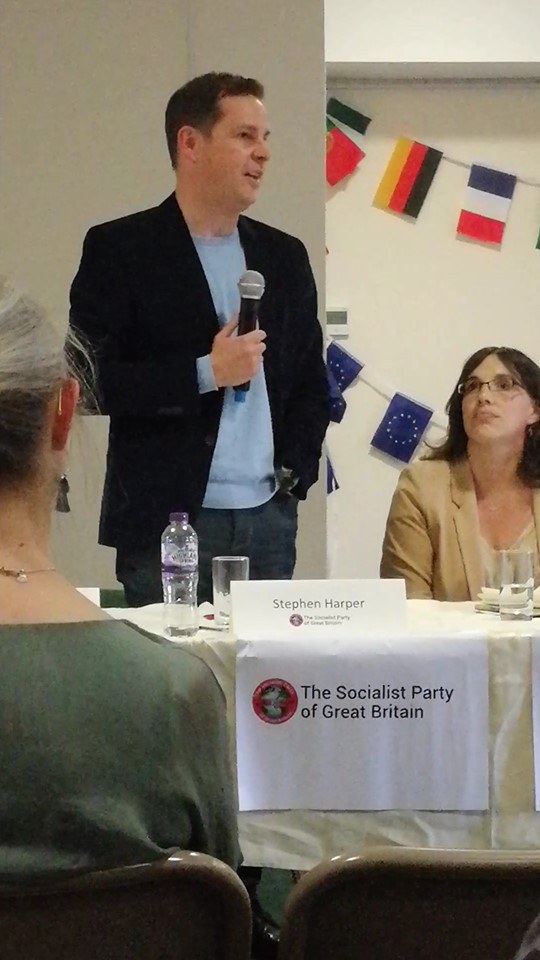 The result in the local elections we contested in Folkestone was :