Radical World History from Below

In his A Radical History of the World (Pluto Press, 2018), described as ‘a history of the world from below’, Neil Faulkner is at pains to point to the endeavours of the ‘common people’ and to highlight the many historical examples of class resistance by the masses to their oppression. Most of this class struggle was of course unequal and a significant amount of the narrative tells stories of ferocity, atrocity and murder against the poor, weak and powerless by the wealthy, strong and powerful. At the same time the author makes it clear that history has also had (and has) other significant interacting drivers, in particular cumulative technical advance and struggles between rival ruling classes for control of surplus wealth, leading to wars and invasions on an ever increasing scale. So we are told how in Iron Age China, as the Qin rulers fought for supremacy over the Zhou dynasty, after one battle, 100,000 prisoners were beheaded and the King of Qin adopted the title of ‘Divine Emperor’. The Roman Empire is described as ‘a predatory imperial system of robbery with violence’ in which ‘the Roman ruling class seized by force the surplus, labour and means of production controlled by foreign ruling classes’. 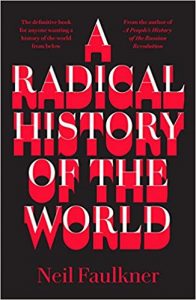 The necessarily ‘broad sweep’ method that a 500-page book seeking to cover the whole of human history has to adopt is highly successful here in conveying how those drivers acted on human development and moved humanity through various phases from a relatively stable hunter-gatherer society to today’s advanced industrial capitalism. So, for example, it tells us how, once settled agriculture became widespread as a way of living and produced a surplus, society became hierarchical and private property, class domination and power structures were established based on power and wealth differences. At the same time it illustrates the immense complexity of the development of class societies in different parts of the globe, while also pointing to their similarities, i.e. ‘the dominance of one class over another or others, the exploitation of a propertyless majority by a small, wealthy, propertied majority, this always seeming to be a permanent, unchanging and never-ending state of affairs’.

Perhaps inevitably the largest part of this book deals with more recent history, the history of capitalist development – first from the seventeenth century onwards in its mercantile form and then moving to its industrial phase in the nineteenth century. The story of the coming of this ‘new world order dominated by the market and the profit motive’ is narrated with the succinctness and clarity characteristic of the way the whole book is written.  And the ‘history from below’ element of this book comes much more to the fore in the author’s perspectives on the development and events of modern capitalism. He sees many of the twists and turns of the last 200 or so years as driven, at least in part, by mass action of the dispossessed, from the French Revolution (‘driven forward by mass action from below’), through the ending of the First World War (‘ended by the revolutionary action of millions of workers, soldiers, sailors, and peasants across Europe’) and the events of the Bolshevik revolution (‘the Russian revolution had shown how the working class might lead a socialist revolution in a predominantly peasant country’) to what are seen as revolutionary events that could potentially have led to the working class taking power and to ‘successful Socialist revolutions’ in various parts of the globe since the second world war (i.e. Hungary 1956, France 1968, Chile 1972, Portugal 1974, Spain 1976, Iran 1979, Eastern Europe 1989).

Oh dear.  Socialist revolution needs mass understanding of the class nature of society and in none of those places at those times is there any evidence that such understanding existed. Struggle there may have been, but it was struggle to cast off one brand of ruler or way of running capitalism for another (‘new rider, same mule’, as the writer says of the post-revolutionary order in nineteenth century Latin America). This is a pity, since this book shows profound knowledge and understanding of the nature of capitalism (‘capitalism is an irrational and dysfunctional system. Crisis is never far away. Boom and slump are its natural rhythms’), of its class basis (‘a minority continue(d) to enjoy grotesque wealth while millions live(d) in poverty’), and of the potential for modern technology to produce an abundance of goods and abolish human want (‘humanity is capable of producing unprecedented amounts of wealth’). It also makes real the enormity of capitalism’s wars in terms of people killed, lives destroyed and environmental ruin. Yet it is somehow stuck in the idea that a decent alternative society to replace capitalism can be brought about by a disgruntled but not initially class-conscious majority being led by a class-conscious ‘leadership’ into ‘explosive’ mass action to seize state power and this majority quickly developing that consciousness as a result. This is what informs the author’s view about what he sees as ‘near misses’ in revolutions in the twentieth century (Russia, France, Spain, etc.). In reality the society to replace capitalism, though it needs to come from mass action from below, can only happen when the masses first understand the need for it and collectively take action to bring it about. So, though the author has no illusions about the horrors Stalinism visited on the Russian people (‘to satisfy the pace of state capitalist accumulation, the working class, the peasantry and the national minorities had to be pulverised into submission’), it is hard to regard the views he expresses on the Russian revolution and other uprisings elsewhere in the world since as other than romantic illusion.

So, in the later pages, we have less a history and more an ever so eloquent manifesto – broadly speaking a Trotskyist one. Yet, even so, from a socialist point of view, there is a vast amount to recommend in this book. Its consistently pithy characterisations of important truths are a joy to read (‘capitalism is a system of competitive capital accumulation driven by profit and the enrichment of the few’; ‘the struggle for reforms is a Labour of Sisyphus, in which that which has been won by … one generation can as easily be lost in the next.’; ‘the stability of any class society … requires that the masses be divided among themselves’; ‘the Chinese … have the worst of both worlds: the drudgery, poverty, and insecurity of free market capitalism, and the authoritarianism of a Stalinist police state.’). It defies the tenets of conventional history, slices through complexity and challenges the idea that historical judgement has to be ‘neutral’. And it also quotes a marvellous line from Rousseau: ‘You are undone if you once forget that the fruits of the earth belong to us all, and the earth itself to nobody’.