Editorial: There is only one world

We live on a planet that is capable of providing all its inhabitants with the food, housing, health care, education and the other amenities of life that they need. But this does not happen. Instead, there are no end of problems.

No end of problems

One problem, that affects everyone, is the threat of global warming caused by the reckless burning of fossil fuels. It’s not the only environmental one. There’s also the pollution of the seas by plastic waste. Then there’s world poverty and malnutrition while the super-rich get even richer to the extent that Oxfam has estimated that just eight men own as much as half the world.

And wars.  The world’s most powerful states compete to control access to raw materials and routes to get them out, in which might is right. As yet there have only been proxy wars fought by local puppets, as in the Yemen, in which the local population suffers terribly. The powerful states waste the world’s resources to equip themselves with the most deadly weapons of mass destruction they can afford.

The economic system that exists all over the world today is capitalism where productive resources are owned and control by a few rich individuals, corporations states and whose rules of operation are ‘no profit, no production’ and ‘can’t pay, can’t have’. It is this system of production for profits that is the root cause of the world’s problems as it imposes that making profits has to take priority over meeting people’s needs and protecting the planet.

It is clear that there can be no national solutions to these problems. Those who are saying that things will get better if Britain leaves the EU and tries to go it alone are deluding themselves and have deceived their followers. Those who want to stay in the EU don’t make this mistake but the EU is one of the big blocs competing for markets and raw materials. It is part of the problem not the solution.

The only way-out is global. It’s the world’s natural and industrial resources becoming the common heritage of all humanity so that they can be used to directly meet the needs of the world’s population on the basis of ‘from each according to ability, to each according to need’. Free of ownership by the few and the rule of ‘no profit, no production’, this is the only framework within which problems such as global warning, growing inequality and wars can be tackled for good.

This is what we are standing for in these elections. If you agree you can show this by voting for our list. If you want to know more about our aims just fill in and send us the reply coupon below. 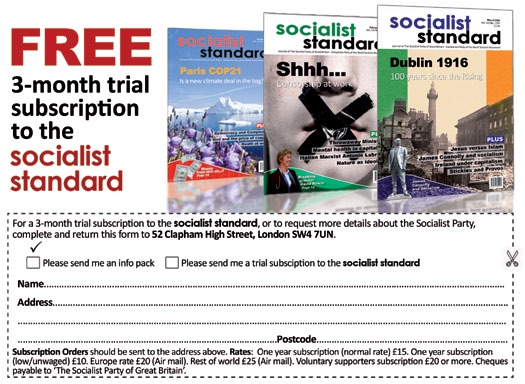