Book Review: ‘Marxists in the Face of Fascism’

‘Marxists in the Face of Fascism: Writings by Marxists on Fascism from the inter-war period’. Edited by David Beetham (Haymarket Books. 2019. 380 pages) 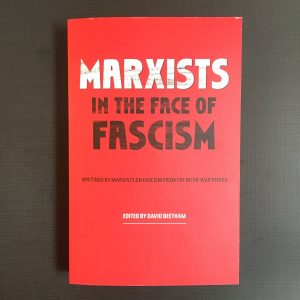 In his introduction to this reprint of a book that first came out in 1984, the editor points out that fascism is not a contemporary threat as historical conditions are not the same as they were between the last century’s two world wars. The word ‘fascist’, however, is still frequently bandied about today and not just by ‘anti-fascists’ as it has come to be used to describe any authoritarian individual or action. It was even misused at the time, as Togliatti, a leader of the Italian Communist Party pointed out in 1928 in one of his articles reprinted here: ‘It has become customary to use it to designate every form of reaction. (…) [W]henever the so-called democratic freedoms sanctified by bourgeois constitutions are attacked or violated, one hears the cry: “Fascism is here, fascism has arrived.”’

The book is a collection of articles from the period by mainstream Communists, dissident Communists, and Social Democrats. The original fascists were the followers of Mussolini who came to power in Italy in 1922 but the word was soon used to describe any reactionary, openly anti-working-class movement anywhere. The official Comintern line was that fascism was a mass mobilisation of the ‘petty bourgeoisie’ to further the interests of ‘finance capital’ that arose because of the failure of other countries to emulate the Bolsheviks’ seizure of power in Russia in 1917. After Hitler came to power in Germany in 1933 it was seen as a particular threat to Russia whose foreign policy interests the Comintern was committed to defending.

Despite what Togliatti said, the Comintern did describe, as can be seen from their writings here, any policy of attacking working class living standards as ‘fascist.’ It was on this basis that, for a period, they denounced the Social Democrats as ‘social fascists’ because, when in government on their own or in coalition, they felt they had no choice but to support such a policy. As Otto Bauer, the leader of the Austrian Social Democrats quoted in the introduction, said in its defence: ’if you won’t create a socialist society, then you must do nothing to disturb the mechanism of the capitalist order, under pain of economic catastrophe.’

It was not until 1933 that fascists (though that is not what the Nazis called themselves) came to power in Germany. The myth has grown up that this could have been prevented if only the Social Democrats and Communists had united to oppose it. This did not happen as the Communists had only just stopped calling the Social Democrats ‘social fascists’, while the Social Democrats pursued the policy of ‘tolerating’ as the lesser evil any government as long as it didn’t include the Nazis. This policy failed as the non-Nazi right-wing parties did eventually allow Hitler to come to power constitutionally.

In Austria the Social Democrats did pursue, as Bauer pointed out, the different policy of refusing to ‘tolerate’ any government that didn’t include them. But they too were crushed, though by a different reactionary group to the Nazis. It was left to Kautsky to make the point that, as the Social Democrats and Communists together still represented only a minority of the population, there was not much they could have done to stop a government in control of political power and enjoying majority acquiescence.

It has to be said that the Social Democrats represented here, Bauer and Kautsky in particular, came up with a better analysis than the Communists. In fact it is surprising how ‘Marxist’ they were compared to the Leninists. Apart from Togliatti, the official Communists (who like the fascists also stood for a totalitarian, one-party dictatorship) didn’t have much interesting to say, while the dissident Communists Trotsky and Thalheimer only confused things by irrelevantly describing ‘fascism’ as a form of ‘Bonapartism’ (after Napoleon’s nephew who ruled France as dictator between 1852 and 1870).

Bauer, in the last article he wrote before his death in 1938, saw what was coming and why:

‘With the new division of power brought about by the treaties of 1919 British and French imperialism achieved their war aims, and since then they have successfully defended the position of power won by conquest in the war. The imperialism of Great Britain and France is the imperialism of the satisfied, of the satiated. For this reason it is conservative and peaceful. In Germany and Italy, in contrast, there developed an aggressive, warlike imperialism, which seeks to revise the global distribution of economic and political power.’

This is one reason why fascism was a product of a specific period of twentieth-century history which is highly unlikely to be repeated, however much some may still cry ‘fascist’.