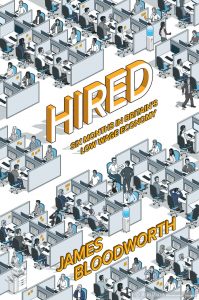 This is a report on time spent living in various towns and working in insecure badly-paid jobs. It gives a vivid and depressing picture of what life is like for so many people who are near, if not quite at, the bottom of the social pyramid.

Bloodworth began in Rugeley, Staffordshire, working in an Amazon warehouse. Most workers there were recruited through one of two agencies, often on a zero-hours contract. The work was ‘physically exhausting’ and ‘mentally deadening’, as it involved walking around ten miles a day in the enormous warehouse, and it was particularly hard on those who were overweight or elderly. Simply walking to the canteen or queuing to have your pockets checked could take ten minutes or so, and that time was not paid for. Workers’ every move was tracked by management, and they could be told to speed up. Six disciplinary points would lead to you being sacked (‘released’ was the euphemism used), and points could be awarded for being ill or being late because Amazon’s bus had broken down. Few local workers would put up with the conditions for long, hence the high staff turnover and the many Eastern Europeans employed there. And the agencies would often pay workers late or underpay them.

Then he travelled to Blackpool, where he worked in the adult home care sector. Again there was a high staff turnover here, partly caused by the low wages but also by the fact that workers often had to rush around to complete their calls, making their working day very long and giving them barely enough time to deal with each person they visited. Many isolated elderly people just wanted a bit of a chat but there was rarely time to do more than the bare minimum of caring. The private companies to which home caring has been outsourced just saw the people being looked after as ‘first and foremost pound symbols on a balance sheet’.

In South Wales Bloodworth worked at a call centre in Swansea for the Admiral insurance company. He found working there relatively positive and tolerable, though there were still league tables for performance, and staff turnover was above the national average.

His final destination was London, where he worked as a cab driver for Uber, though strictly he was an ‘independent contractor’ in the gig economy. Industries like this are full of nice-sounding terms that mask the underlying reality: so the money earned at Deliveroo is called a fee rather than a wage. Uber benefits from having lots of drivers on call, with all the risk of going some time without a fare passed on to the drivers. The pay earned is unpredictable, and there are limits on how many trip requests can be rejected. He reckoned that his annual take-home pay would have been £15,600, about £7.50 an hour.

Besides describing the work he did, Bloodworth also says quite a bit about the towns he stayed in. Rugeley is one of several former mining areas that are now home to Amazon warehouses, but have seen little ‘economic regeneration’. Of Ebbw Vale, he says it ‘remains trapped in limbo between an industrial past and a future that has yet to arrive’. Blackpool, where the tourist trade has drastically shrunk, has some of the most deprived areas in England, a big homelessness problem and a suicide rate almost twice the national average.

He says that consumers have become used to products that are cheap because of places like the Amazon warehouse. But the blame lies in the system, not in those who are themselves victims of it.