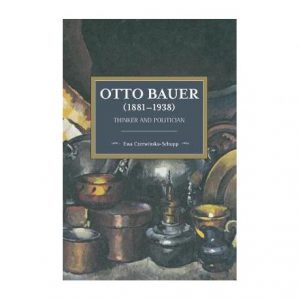 Otto Bauer, who was the leader of the Austrian Social Democrats after WW1, was in this position. While involved in parliamentary politics and for a short while Austria’s Foreign Minister, he continued to write pamphlets and articles with a Marxist flavour. He is mainly known amongst English-speaking critics of capitalism for the polemics against his theory of nationalism in the writings of Rosa Luxemburg, Lenin and Pannekoek. He justified working-class nationalism (and so supported Austria in WW1, though he did practise what he preached and joined the army but ended up spending three years in a Russian prisoner-of-war camp, where he continued to write on Marxism). He was in fact a pan-German nationalist who advocated the incorporation of the German-speaking parts of the former Austro-Hungarian Empire into Germany.

The Austrian Social Democrats controlled Vienna city council and used this to improve the housing conditions of workers there but they never achieved a majority in parliament. The state remained under the control of conservative and reactionary parties and in 1934, egged on by Mussolini, the government sent in the army to suppress the Social Democratic party and its trade unions. Perhaps surprisingly for Social Democrats, some of its members, against the advice of the party’s leaders, tried to defend by force of arms working class districts from the assault. But their rifles and machine guns were no match for the big guns of the army, and they were crushed. Executions, jailings and repression followed.

According to the author, Bauer blamed himself for this tragedy, regretting not having sought a deal with the democratic wing of the Christian Democrats instead of relying on the eventual election of a Social Democrat parliamentary majority. Her book, originally a PhD thesis, provides a comprehensive account of Bauer’s life, activities and views.