Given that we the people have elected the likes of Viktor Orban, Rodrigo Duterte, Recep Tayyip Erdoğan, Daniel Ortega, the fundamentalist Islamic Salvation Front, even Adolf Hitler, it’s little wonder that some people have turned to prayer. Well, for many Christians, including Sarah Sanders. the Whitehouse Press Secretary, those prayers have been answered and we have been blessed with Donald Trump. ‘I think God calls all of us to fill different roles at different times and I think that He wanted Donald Trump to become president. And that’s why he’s there. And I think he has done a tremendous job in supporting a lot of the things that people of faith really care about’ (cnsnews.com, 31 January). One contributor to the site, MJ, went so far as to state: ‘I definitely agree that God chose Donald Trump to be our president! The devil and hordes of his demons have done everything they know to try and hinder and stop him from accomplishing God’s purposes, yet he remains in office. Why? Because he has given his life to God and desires to restore Christian values to our nation to make it great again. Bless him, Lord!’ 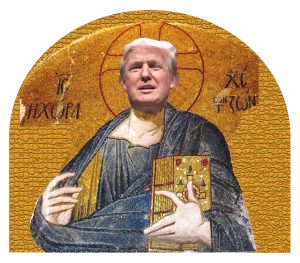 The religious Left is no better. In a commentary titled ‘The Biblical Values of Ocasio-Cortez’s Democratic Socialism’ (sojo.net, 31 January) we are informed ‘The Bible envisions a just and equitable social order. As King explained, “God never intended for some of his children to live in inordinate superfluous wealth while others live in abject, deadening poverty.” Democratic socialism seeks to build a more humane society, not by force or compulsion, but by way of the age-old democratic practice of “one person, one vote.” For this reason, democratic socialist policies can only move forward if the American people understand their value and vote for them.’ Surprisingly, there is a kernel of truth here: genuine socialism can only come about through majority understanding. But, religion, be it of the Left or Right, supports the status quo. Quotations from the Bible are offered in support of healthcare for all, a fair wage and a minimum one for all, as well as fair treatment of workers. The real message is, however, you’ll get pie in the sky when you die!

Worship Me or Die

‘Christianity is virtually outlawed in North Korea, where dictator Kim Jong Un is the subject of a personality cult that treats him like a god. The possession of Bibles, open religious services and any attempt to build underground church networks could mean torture, lengthy prison terms or execution’ (cruxnow.com, 1 February). If you have ever seen North Korea from the heavens, thanks to a satellite image and technology developed by the 99 percent, the contrast with the South is astonishing. Schopenhauer wrote that ‘religions are like glow worms; they shine only when it is dark’. Atheism, whether state sponsored or not, is ultimately another blind alley. So the fight continues on two fronts, to replace religion and supersede atheism through socialist understanding.

No Gods, no Masters