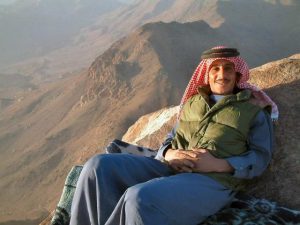 In Israel/Palestine there exist communities of what some call the ‘Invisible Citizens’ and with echoes of past justifications for the establishment of Israel assert that the Negev desert where they dwell is vacant and undeveloped. These are the Bedouin who make up around 3.5 percent of Israel’s population and thousands of Bedouin serve in the Israeli army. Although sharing a common language and some traditions there are significant cultural differences between the Bedouin and Palestinian Arabs.

The Bedouin comprise the youngest population in Israeli society – about 54 percent of the Bedouin population is younger than 14 and in 2003 the Israeli daily Ma’ariv published an article entitled ‘Special Report: Polygamy is a Security Threat’, detailing a report put forth by the Director of the Population Administration at the time, Herzl Gedj, which described polygamy in the Bedouin sector as a ‘security threat’ and advocated means of reducing the birth rate. Israel outlawed polygamy but it is widespread among the Bedouin. Israel is now trying to end the custom, prosecuting suspected Bedouin polygamists. But it is seen only as a ploy to curb their population growth and criminalise their community members.

The proposed mass expulsion of Bedouin under the Prawer Plan raised concerns from human rights groups. In 2013, the Israeli government shelved the plan to forcibly relocate about 40,000 Bedouin Arabs to government designated towns. One of the plan’s architects stated that the Bedouin had neither been consulted nor agreed to the move. ‘I didn’t tell anyone that the Bedouin agreed to my plan. I couldn’t say that because I didn’t present the plan to them,’ said the former minister Benny Begin.

While the Prawer Plan as originally conceived has been thwarted, demolition of homes and the displacement of Bedouins has continued albeit in piecemeal form through a process of ‘development’ and building ‘infrastructure’. Israel approved an $800 million redevelopment project in 2017 as it moved two huge military bases into its southern desert.

The Housing and Construction Ministry launched a plan for housing units in the Negev as ‘a significant step towards realising the Zionist vision of settlement’. The then minister Yoaf Galant said ‘We must not lose our hold on the south. I have been in the southern sector for many years. Today, when I come to the Negev and look at the surroundings of Be’er Sheva, I am shocked by the amount of illegal Bedouin construction in recent years.’ He stated that, ‘For all of us, a national home is the Land of Israel. In addition to building houses, we in the Construction and Housing Ministry see as a mission the construction of the Zionist youth spirit that builds and settles the land and I pin my hopes on our excellent youth, who will lead the development and settlement of the country in all its parts.’ He later told the Knesset: ‘The south is under attack not only from Gaza – the illegal and hostile construction in the rural Bedouin areas in the Negev… has spun out of control… The programme to reinforce Jewish settlement in the Negev constitutes a long term and stable solution for a Jewish hold over the region.’

Rafat Abu Aish told Al Jazeera how his home village of Laqiya is hemmed in by Israeli military infrastructure and the Jewish community of Carmit, ‘leaving no room for the village to grow… Soon you will find that between all the Bedouin communities are Jewish communities or army bases separating us from each other’, adding ‘it’s very planned.’

As many as 1,000 Bedouin Palestinian families are threatened with forcible relocation by government plans for a major new highway, Road 6. Originally 100 Bedouin families were to be moved but in December 2018, Agriculture Minister Uri Ariel declared he intended to take advantage of the situation to expel a further 900 families. ‘The government is committed to demonstrating governance in the Negev,’ Ariel declared, describing the construction of the road as an opportunity to ‘return to the state huge tracts of land’.

There are several other large-scale infrastructure plans that will displace Bedouin, including a rail line that will swallow up extensive tracts of land and impact on the 1,400-strong Bedouin community of Rahma. A new phosphate mine will also entail the forced relocation of at least 10,000 Bedouin citizens. The Israeli armament corporation IMI is locating a massive testing facility in the Negev which will put some 1,200 Bedouin homes and other buildings at risk of forced displacement.

Israeli government policy towards the Bedouin has remained constant. The Goldberg report described it as a three-part plan: ‘No recognition of Bedouin rights over the land, a willingness to offer land claimants compensation ‘beyond the letter of the law,’ and conditioning the payment of compensation on the evacuation of the land and transfer to one of the recognised settlements’.

Israel’s Bedouins have a daunting struggle to preserve their land, their homes and livelihood in the face of a formidable foe.