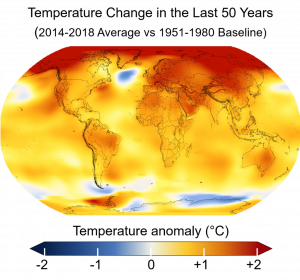 Last October the UN Intergovernmental Panel on Climate Change (IPCC) published a report on what they consider would have to be done, and by when, to avoid average global temperature rising by the end of the century by more than 1.5°C above pre-industrial levels. They concluded that carbon dioxide (CO2) emissions would have to be stabilised by 2030, in the sense of no more being released into the atmosphere than can be absorbed by nature or by human action. Hence the headlines about only twelve years left to avoid disaster. Then, in December, a full-scale two-week conference on climate change, with delegates from the 190 states that had signed the 2015 Paris Agreement to take measures aimed at limiting the rise to 2°C, was held in Katowice in Poland.

(a) a rise in sea levels as oceans warm up and so expand and as the polar icecaps begin to melt;

(b) more stormy weather in some regions due to more energy being in the atmosphere;

(c) changes in regional agriculture conditions and ecology, disastrous in some places though not necessarily negative everywhere.

We know definitely that, unless the rate of emission of CO2 is stabilised, average global temperature is going to continue to rise and that this will affect sea levels, the weather, and regional agricultural and ecological conditions. (In fact it will continue to rise for a while even if emissions were stabilised tomorrow, as an effect of past emissions). The question is by how much and to what extent. This is where the speculation begins.

Not, however, wild speculation but speculation based on certain assumptions. In drawing up scenarios of what might happen in the future, scientists have to make two basic assumptions. First, about the link between a rise in CO2 in the atmosphere and the rise in average global temperature. Second, about what humans do, or do not do, to reduce or compensate for CO2 emissions.

As to the first, nobody knows with certainty what it is. The standard that scientists have chosen is an estimate of by how much the global average temperature would rise if the amount of CO2 in the atmosphere doubled. This is not easy to calculate as there are feedbacks. Once these have been taken into account, the figure they come up with is anything between 1.5°C and 4.5°C, variously described as ‘the best estimate’, ‘most likely’, or even ‘the best guess’. It is in fact a ‘guestimate’, albeit an informed one.

Polar ice-core records show that in the pre-industrial past the amount of CO2 in the atmosphere was for centuries 280 ppm. Today it is 410 ppm. If present trends continue it will reach 560 ppm, i.e., double, by 2050. In that case, in the period after that date until the end of the century average global temperature would gradually rise to 1.5°C or by 4.5°C above pre-industrial levels or by anything in between.

As average global temperature has already gone up by about 1°C since pre-industrial times we are talking about a possible further rise by the end of the century of between 0.5°C and 3.5°C.  That’s as accurate as you can get. The trouble is that there would be a huge difference in effects between the lower and the higher figure. All we can safely say is that if CO2 emissions continue to increase, so global average temperature will go up and so the effects of this will be felt. Since most of these effects will be negative, CO2 emissions should be reduced in any event.

But how? One suggested way focuses on individuals changing their individual behaviour, as by not driving a car, not travelling by air, eating less or no meat, turning the temperature of their home down and wearing a sweater, etc. Clearly this would not be sufficient, quite apart from the fact that the level of popular consumption is linked to the state of the economy which in turn is linked to the prospects for making and accumulating of profits as more capital. The tail can’t wag the dog. What is required is action at global level to deal with production methods that involve directly emitting CO2 into the atmosphere.

Co-ordinated global action is what is needed, but capitalism impedes this. Capitalism is a world system under which capitalist enterprises and states compete against each other to secure markets and sources of raw materials. It is driven by an economic imperative that imposes itself on those organising production to use the cheapest available methods so as to survive in the struggle to make and accumulate profits. ‘Growth’ of production is built-in to it.

Energy is a key input of all production; its cost affects the competitiveness on both home and world markets of goods produced within the frontiers of a state. This is why states are particularly concerned with the cost of energy and its security of supply. At the moment coal, oil and natural gas are still cheaper than alternatives such as renewables and nuclear, which is why they were used in the past and continue to be used.

When Trump says that he is not going to accept any measures that are ‘bad for business’ he is expressing the position that all states take and have to take. No state is going to decide unilaterally not to use its cheapest source of energy, even if it is one that emits CO2, as that would increase its energy costs and undermine its competitiveness internally as well as on world markets. So the states into which the capitalist world is divided have agreed that the United Nations should take the initiative. However, the various climate change conferences that the UN has organised have shown that the ‘nations’ are far from being ‘united’. They have proved to be a veritable nest of vipers as each state tries not only to advantage itself but to disadvantage its rivals.

The only agreement that has been possible – in fact, given capitalism, the only one that is possible – is one which disadvantages no one compared to everyone else. This was the outcome of the 2015 conference in Paris which agreed that all states should commit themselves to reducing emissions so as to avoid average global temperature rising 2°C above pre-industrial levels (a further 1°C from today) by the end of the century. However, as the UN is toothless and can’t impose anything on states, it left to each state to decide, in the light of its particular circumstances, what measures it would take to contribute towards this.

In November the journal Nature Communications published an article analysing the measures pledged by states in pursuit of the Paris Agreement (www.nature.com/articles/s41467-018-07223-9), one of whose conclusions the Guardian (16 November) summarised as:

‘Under the Paris agreement, there is no top-down consensus on what is a fair share of responsibility. Instead each nation sets its own bottom-up targets according to a number of different factors, including political will, level of industrialisation, ability to pay, population size, historical responsibility for emissions. Almost every government, the authors say, selects an interpretation of equity that serves their own interests and allows them to achieve a relative gain on other nations.’

The conference in Katowice didn’t alter this but just worked out common rules for verifying whether the self-determined measures were being implemented and to what extent. It left unchanged a state’s right to decide what measures to adopt.

Under capitalism, the best that can be achieved is some non-binding inter-governmental agreement that would disadvantage nobody commercially. Clearly, this is pretty minimalist, a consensus at the lowest level. The promised measures, if adopted, will have some effect in slowing down global warming, which should mean the IPCC’s worst case scenario of a further rise in average global temperature of 3.8°C by 2100 won’t be realised, even if they are not enough to limit the rise to a further 1°C (making the rise 2°C since pre-industrial times).

It is looking highly unlikely, if capitalism continues, that the rise in average global temperature this century is going to be held to this limit. This would bring other problems which would be more acute the more the limit is exceeded and which capitalism would be equally incapable of coping with, in particular the population displacements due to rising sea levels and worsened agricultural conditions in some parts of the world. Co-ordinated global action would also be required to deal with this, but once again capitalism’s division into competing capitalist states will impede this.

The lesson is that those concerned about global overwarming should direct their efforts to getting rid of capitalism and replacing it with a system where the Earth’s natural and industrial resources will have become the common heritage of all humanity. This will put a stop to the operation of the current economic imperative to seek and accumulate profits and will provide the framework for co-ordinated global action to deal not only with global warming but other current problems such as world poverty and constant war somewhere in the world.