Book Review: ‘World In Crisis: a global analysis of Marx’s law of profitability’ 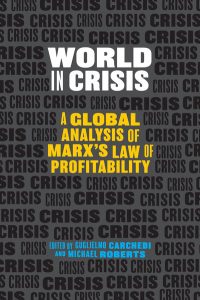 ‘World In Crisis: a global analysis of Marx’s law of profitability’. Edited by Guglielmo Carchedi and Michael Roberts (Haymarket books. 2018)

For Marx the rate of profit is the excess of value of a commodity over its cost price, which he expresses as the formula s/(c+v) (‘s’ is surplus value, ‘c’ is constant capital, the cost of machinery and components, ‘v’ is variable capital, the wages of workers whose labour adds value to the product).

Competition between capitalists tends towards equalising this rate of profit, as each capitalist seeks to invest in those branches of industry that are generating the highest returns. Technological improvement gives a competitive edge to capitalists, so there is a tendency to increase the ‘c’ part of that formula. In the long run this means that the total capital will rise in proportion to the surplus value being produced, and the rate of profit will tend to fall.

What Roberts, Carchedi and their contributors observe in their data is that this is precisely what is happening. There are problems, though, as many of the data tables/graphs are attributed to ‘author’s calculation’ and there are no links given to data sets or any indication of how these representations were derived.

It is difficult to observe the working of these Marxian formulas in the real world, because, even leaving aside any political incentive to misrepresent the reality of the situation, the categories Marx described may not correspond with any specific data set. For example, some surplus value manifests itself as inflated salaries for directors, and ‘profit sharing’ schemes would manifest as profit, rather than being part of wages, as they really are.

This is not necessarily fatal, so long as the data used is consistent, and then at least it is showing some real world trends from which the Marxian categories can emerge as shadows. An observable, consistent decline in the empirical rate of profit, though, does not necessarily mean that Marx’s tendency is observed in action. Other factors may be in play (which these essays sometimes mention, without exploring).

There is little or no discussion of primary accumulation — what the Marxist geographer David Harvey describes as accumulation by dispossession. That is, wealth that is acquired not by market rules, but by fraud or force (the great historical example being slavery). This gap is puzzling, especially as the central plank of the crisis theory presented is that the fire sale of the capital of bankrupts is necessary to restart profitability and accumulation. The nearest any articles come to addressing this matter is by hand-waving mentions of ‘imperialism’. The point is, though, that the logical effects of falling profitability would be for capitalists to abandon market accumulation and resort to other forces, rather than continue to let profits fall through the floor.

One other force is rent seeking. Incredibly, rent is not even mentioned in the index of this book. Carchedi does partially address rent, discussing monopolies as a potential response of capitalists to falling profitability. He correctly notes that the underlying effect of technical compositions of capital (the ratios of capital to labour) means that real surplus profit rates will vary among monopolies. What he misses, however, is that such differential surplus profits will be often invisible, and that the monopolists would lack the means to observe different rates of profit, or to pursue improved ones. This was essentially one of the significant problems historically encountered by Eastern Bloc state capitalism.

The power of the idea of the tendency of the rate of profit to fall lies not in the observed phenomena of declining profitability, but, like the dog that didn’t bark in the night, in the steps the ruling class may take to avoid its effects. Rather than simply pointing to periodic crises of capitalism, we are in some ways better pointing to the inevitable need to periodically disrupt society and dismantle existing social relations in order to engage in a new spurt of profitability for one faction or another of capitalists.

Notwithstanding this, there are useful chapters on derivatives and algorithmic trading which do some useful work in dismantling the idea that crises are caused by bankers and spivs in the city. It also provides a useful overview of the state of worldwide capitalism.