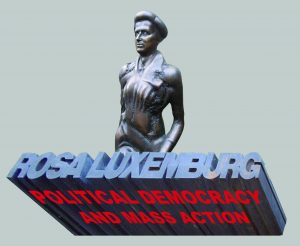 Rosa Luxemburg, who was murdered a hundred years ago this month, had been a socialist member of the German Social Democratic Party (SPD) until it supported the German government in the First World War, sharing its basic positions. She advocated that the working class should win control of political power with a view to replacing capitalism with a society based on the common ownership of the means of production by the whole of society, with production directly for use. She held that the exercise of political power to bring this change should take place within the framework of political democracy, and that even under capitalism political democracy was the best framework for the development of the working class and socialist movements; in fact, a consistent theme of her political views was that the ‘proletariat’ (the working class) had to take up the torch for democracy abandoned by the once-progressive ‘bourgeoisie’.

She also accepted that, in addition to the ‘maximum’ programme of socialism, a socialist party should also have, as did the SPD and parties in other countries modelled on it, a programme of social and political reforms to be achieved under capitalism. In her famous pamphlet Reform or Revolution (1898) her opposition was not to reforms as such nor to campaigning for them, but to reformism as the doctrine that capitalism could be gradually transformed into socialism by a series of social reform measures enacted by parliament. This was the view of the ‘Revisionists’ within the SPD and was the target of her pamphlet.

Elsewhere she explained the official SPD (and her) attitude towards parliamentary action:

‘The parliamentary struggle, however, the counterpart of the trade-union struggle, is equally with it, a fight conducted exclusively on the basis of the bourgeois social order. It is by its very nature, political reform work, as that of the trade-unions is economic reform work. It represents political work for the present, as trade-unions represent economic work for the present.’ (The Mass Strike, the Political Party and the Trade Unions, chapter VIII).

This is the correct meaning of the word ‘parliamentarism’. It does not mean participating in elections and going into parliament but using parliament to get reforms under capitalism.

The Revisionists lost the vote but they won the war as the SPD came to concentrate more and more on parliamentary activity, prioritising increases in its representation in national and regional parliaments and pursuing social reforms, in some places through deals with the Liberal or Catholic parties. Luxemburg could see where this was leading. And where in fact it did eventually lead: to the SPD becoming a democratic social reform party, relegating its maximum programme of socialism to a distant future or to conference rhetoric. Naturally, she was opposed to this.

Her alternative was the ‘mass strike’, basically extra-parliamentary action, initially still to get reforms, what the anarchists call ‘direct action’. Her argument was that reforms obtained in this way would not lead to encouraging mere ‘parliamentarism’ but would prepare the working class for the mass action that the establishment of socialism would have to involve.

Knowing Marx’s insistence on the need for the working class to win control of political power so as to be in a position to change the basis of society from class to common ownership, she was at pains to distinguish her position from that of the anarchists. This was obvious enough anyway since the actual ‘mass strikes’ that she supported were aimed at obtaining or extending political democracy. 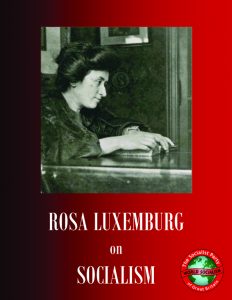 Mass strikes to get the vote

This was how she analysed the uprising in Russia in 1905 in her pamphlet The Mass Strike, the Political Party and the Trade Unions (1906). She knew perfectly well that a socialist revolution was out of the question in Russia and that what was on the agenda was a ‘bourgeois revolution’ to establish a democratic republic with a parliament within which the working class could press for social reforms. As she wrote:

The events in Russia confirmed a view that she had already come to a few years earlier in relation to the campaign in Belgium for universal suffrage, as not just votes for everybody but equal votes for everybody, i.e., with no mechanism to make the votes of rich property-owners count more than those of workers.

Votes for every man had been obtained in Belgium as a result of a general strike in 1893 but with the rich having more than one vote. An attempt to make this more democratic in 1902 by abolishing plural votes had failed despite another general strike. Luxemburg argued that this failure was due to the leaders of the Belgian Workers Party concentrating on doing a deal with the Liberals in the Belgian parliament and calling off the strike to facilitate this. She argued that if the strike had been maintained the aim could have been achieved (see: www.marxists.org/francais/luxembur/works/1902/rl19020423.htm).

Precisely the same issue came up in Germany itself in 1909 in relation to the electoral system in Prussia. Prussia, the dominant state within the German empire and where its capital Berlin was situated, had a three-class electoral system which gave more weight to the votes of the rich. The SPD launched a campaign for all votes to count equally. Luxemburg fully supported this campaign but argued that mass strikes would be the best way to secure this.

Her position was a bit incoherent because she argued, on the one hand, that mass strikes could not be planned in advance and launched by a decree from on high but had to break out spontaneously from below, while, on the other, she was criticising the SPD leadership for not calling for one. Her position seems to have been that the SPD should accept and encourage the general idea of a mass strike as a weapon to obtain reforms and support such strikes when they broke out.

This position of support for ‘spontaneous’ mass action meant that her views were the exact opposite of Lenin’s. If she thought that the SDP bureaucracy should not seek to call strikes this would apply even more to Lenin’s much more centralised vanguard party. She had in fact criticised in 1904 Lenin’s views in his What is To Be Done? when they became known outside Russia:

‘If we assume the viewpoint claimed as his own by Lenin and we fear the influence of intellectuals in the proletarian movement, we can conceive of no greater danger to the Russian party than Lenin’s plan of organization. Nothing will more surely enslave a young labour movement to an intellectual elite hungry for power than this bureaucratic straightjacket, which will immobilize the movement and turn it into an automaton manipulated by a Central Committee’ (Her italics. See: www.marxists.org/archive/luxemburg/1904/questions-rsd/index.htm).

Her reaction to the seizure of power by the Bolsheviks in November 1917 was to support the overthrow of the pro-war provisional government and the new government’s appeals for world revolution – but she was severely critical of some of the policies the Bolsheviks adopted, including the dissolution of the Constituent Assembly (she said they should have called fresh elections to it) and minority dictatorship:

‘Without general elections, without unrestricted freedom of press and assembly, without a free struggle of opinion, life dies out in every public institution, becomes a mere semblance of life, in which only the bureaucracy remains as the active element. Public life gradually falls asleep, a few dozen party leaders of inexhaustible energy and boundless experience direct and rule. Among them, in reality only a dozen outstanding heads do the leading and an elite of the working class is invited from time to time to meetings where they are to applaud the speeches of the leaders, and to approve proposed resolutions unanimously – at bottom, then, a clique affair – a dictatorship, to be sure, not the dictatorship of the proletariat but only the dictatorship of a handful of politicians, that is a dictatorship in the bourgeois sense, in the sense of the rule of the Jacobins (the postponement of the Soviet Congress from three-month periods to six-month periods!). Yes, we can go even further: such conditions must inevitably cause a brutalization of public life: attempted assassinations, shooting of hostages, etc. (Lenin’s speech on discipline and corruption.)’ (See www.marxists.org/archive/luxemburg/1918/russian-revolution/index.htm).

As it happened, in both Russia and Germany autocratic rule was overthrown as a result of unplanned mass action. By then, following the slaughter of the First World War, Luxemburg had become convinced that socialism itself – the ‘maximum’ programme – was on the agenda and that the alternative was ‘socialism or barbarism.’ She was now a member of the Spartacus League, a party formed by anti-war ex-members of the SPD. Introducing its new programme, which she had drafted, to the party’s conference on 31 December 1918, she identified what had gone wrong with the SPD as the division of its programme into maximum and minimum parts and its concentration on parliamentary activity to achieve the latter:

‘Until the collapse of August 4, 1914, German Social Democracy took its stand upon the Erfurt Programme, by which the so-called immediate minimal aims were placed in the forefront, while socialism was no more than a distant guiding star, the ultimate goal. (….) Our programme is deliberately opposed to the standpoint of the Erfurt Programme; it is deliberately opposed to the separation of the immediate, so-called minimal demands formulated for the political and economic struggle from the socialist goal regarded as a maximal programme. In this deliberate opposition [to the Erfurt Programme] we liquidate the results of seventy years’ evolution and above all, the immediate results of the World War, in that we say: For us there is no minimal and no maximal programme; socialism is one and the same thing: this is the minimum we have to realize today’ (www.marxists.org/archive/luxemburg/1918/12/31.htm).

The programme itself is a 1918 version of the Communist Manifesto of 1848. It reads very well and proclaimed:

‘Down with the wage system! That is the slogan of the hour! Instead of wage labour and class rule there must be collective labour. The means of production must cease to be the monopoly of a single class; they must become the common property of all. No more exploiters and exploited! Planned production and distribution of the product in the common interest. Abolition not only of the contemporary mode of production, mere exploitation and robbery, but equally of contemporary commerce, mere fraud’ (www.marxists.org/archive/luxemburg/1918/12/14.htm#doc-20).

The programme went into more detail about the form that the ‘mass action’ Luxemburg had always favoured (previously for political reform) would take, at least in the conditions in Germany at the time, when the aim was to overthrow capitalism and establish socialism: workers and soldiers councils which would challenge the capitalist state politically and employers economically. She personally, as in her speech, didn’t rule out contesting elections to the National Assembly and using it for ‘revolutionary purposes’ or as ‘a new school of education for the working class’, a position rejected by a majority of the League’s members. In any event, this wasn’t central to the revolution she believed was imminent.

Unfortunately, just as Marx and Engels had misjudged the situation in 1848 in expecting an ‘immediately following proletarian revolution’, so Luxemburg and the Spartacus League misjudged the situation in 1918. Only a relatively small number of workers supported the League’s programme, and their uprising in January 1919 was crushed. Luxemburg had considered it premature but had loyally gone along with the majority decision. It cost her her life.

We can only speculate as to what position she would have taken later had she not been murdered in 1919 but it is unlikely that she would have abandoned her life-long commitment to democracy or her view that socialism had to be established by the conscious mass action of workers themselves ‘from below’ rather than by the action ‘from above’ of a parliamentary or vanguardist party.