Book Review: ‘The Machine and its Discontents – A Fredy Perlman Anthology’

‘The Machine and its Discontents: A Fredy Perlman Anthology’ (Theory and Practice and Active Distribution, 2018). Available from www.activedistributionshop.org 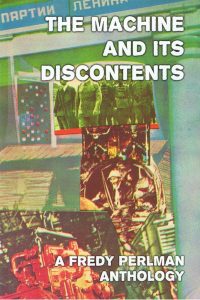 Fredy Perlman (1934—85) is perhaps best remembered in connection with the publishing cooperative Black & Red. His life story, lovingly told by his wife Lorraine in her memoir Having Little Being Much (1989), is a complex one: born in Czechoslovakia and raised in the US, he lived several years in France and Yugoslavia before settling in the Midwest. Equally complex was his development as a radical thinker, influenced at various periods by anarchism, Marxism, situationism and primitivism. However, he never fully identified with any particular school of thought: the only self-descriptor ending in -ist that he accepted was cellist.

Darren Poynton has brought together, edited and introduced a selection of Perlman’s writings that had become difficult to find. They are organised in five parts under the headings: worker-student uprisings, critique of political economy, critique of leaders, critique of nationalism, critique of ‘progress’. The book is illustrated with several of Perlman’s eloquent photo montages.

The writings in Part One pertain to the social upheavals that took place in France and Yugoslavia in 1968. There is a lengthy excerpt from a text co-authored by Perlman and Roger Gregoire describing and assessing their experiences in Paris in May and June 1968 while members of a ‘worker-student action committee’. The detailed account reveals the sorts of things that really happened – and did not happen – in the course of the ‘Paris Spring’. The authors discuss why a more fruitful interaction did not occur between student protestors and striking workers at the Citroen car factory. The crucial obstacle, they conclude, was the fact that the ideas of most participants in the events, students as well as workers, remained within the confines of capitalist reality. In particular, they aspired at most to turn the factory into the collective or group property of its current workforce rather than into social property.

Part One also includes an account of the student protests that broke out in Yugoslavia in 1968 and the reaction of the Yugoslav authorities to them. Perlman exposes the chasm that existed between the ideological façade of ‘self-managing socialism’ and the real functioning of the power structure.

Part Two consists of two excellent essays that in a clear and vivid style explain key concepts in the Marxian critique of capitalism, with special emphasis on capital, alienation and the ‘commodity fetishism’ that makes relations between people appear as relations between things. The second essay, originally published in 1971 as an introduction to the English translation of I.I. Rubin’s Essays on Marx’s Theory of Value, contrasts Marx with Paul Samuelson, author of the standard economics textbook used in American colleges. Perlman demonstrates that Marx and Samuelson do not give different answers to the same questions; they are concerned with quite different questions. This is because Marx belongs to the old school of ‘political economy’, which studied conflicting class interests, while Samuelson represents the new discipline of ‘economics’ that displaced political economy early in the 20th century. ‘Economics’ focuses on technical issues of resource allocation and is therefore better suited to the justification of capitalism.

In Part Three we find excerpts from a text entitled ‘The Seizure of State Power’. This text, which marshals quotations from Lenin, Mao and Machiavelli, purports to be a guide for would-be ‘revolutionary leaders’ intent upon seizing power. It is really a satire designed to highlight the contrast between the seizure of power by an elite and a genuine popular revolution. Some critics did not realise that it was a satire and took it at face value.

The essay in Part Four exposes the class interests behind movements for ‘national liberation’ and argues that nationalism cannot play a progressive role in the contemporary world. Perlman’s views on this subject fully coincide with those of the World Socialist Movement.

In the last few years of his life Perlman went beyond the Marxian critique of capitalism to assail modern concepts of ‘progress’ and ‘civilisation’. Some have accused him of rejecting technology as such – see, for instance, the review of his book Against His-story, Against Leviathan! (1983) in Aufheben (https://libcom.org/library/review-hisstory-aufheben-4). The short article on ‘progress and nuclear power’ that makes up Part Five does not suffice to assess his views at this period.

On the whole, the new Perlman anthology is a very welcome addition to socialist literature.