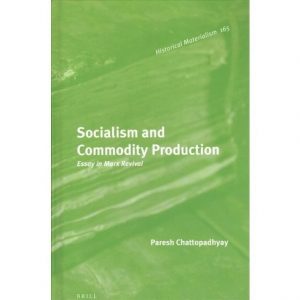 Commodities are items of wealth that have been produced for sale. Commodities have been produced in pre-capitalist societies but such production was marginal. It is only in capitalism that it becomes the dominant mode of production, where goods and services are produced for sale with a view to profit. Commodities must be capable of being reproduced, and this includes the uniquely capitalist commodity of human labour power, the capacity to work which is sold for a wage or salary.

In Marx’s writings the abolition of capitalism is the abolition of commodity production, and with it the money-wages-buying-and-selling-system, together with all the institutions needed to make it function, such as the state. He called this post-capitalist society variously social-democracy, socialism, communism, a free association, the co-operative society and more — but they all meant the same thing.

In Marx’s time there was a consensus on this view of commodity production. So August Bebel could write in Woman and Socialism (1879): ‘since in the new society there is no commodity to buy and sell … There is no money either’. Anybody who regarded themselves as Marxist would have agreed. However, the consensus broke down in the twentieth century as politicians pursued their own political agenda. In 1924 Kautsky wrote: ‘a socialist society would not be able to exist without a system of exchange of products’, that is, money, commodity exchange and the wages system. Kautsky was leader of the German Social Democratic Party and although he mouthed Marxist phrases he pursued policies favourable to a state-run capitalism. In 1917 Lenin asserted in State and Revolution that socialism was a transitional society between capitalism and communism. In this conception of ‘socialism’ the state, commodity production and the wages system not only continue to exist but in the years after the Bolshevik revolution their scope and intensity was extended throughout Russia.

In 1936 Stalin declared that the USSR was officially ‘Socialist’ and in a work published in 1954 spoke of ‘the necessity of commodity production under socialism’. For many the existence of commodity production and the law of value in ‘socialism’ was self-evident. The economist Oskar Lange could confidently write: ‘A careful study of Marx’s writings establishes clearly that he held the view that the theory of value applied to a socialist

economy’ and ‘In a socialist economy the law of value continues to operate because production continues to be commodity production’. Unfortunately for Lange, Marx never held that view and here are just a couple of his repudiations:

‘Only on the basis of the capitalist mode of production do commodities become the general, predominant form of production’ (Capital, Volume 1).

‘Within the co-operative society based on common ownership of the means of production, the producers do not exchange their products’ (Critique of the Gotha Programme).

Paresh Chattopadhyay does a good job of showing why and how the establishment of socialism means the abolition of commodity production. Included in this work are detailed analyses of so-called ‘Market Socialism’ and the ‘Economic Calculation Argument’ and much more. It is to be hoped that a cheaper and more readily accessible version will soon become available.