Book Review: ‘Rupturing the Dialectic – The Struggle Against Work, Money and Financialization’

‘Rupturing the Dialectic. The Struggle Against Work, Money and Financialization’. By Harry Cleaver. (AK Press. 2018) 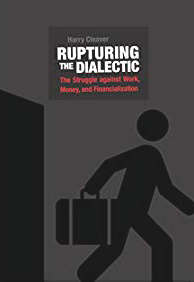 Cleaver has a novel view of capitalism: that capitalists are not so much interested in profits as in imposing work on people as a means of social control. So, for him, the class struggle is between those who want to impose work (the capitalists) and those who resist work (housewives, students and schoolkids as such as well as wage and salary workers). It’s a point of view but not that of Marx.

For someone who has taught and written on how to ‘read’ Marx, he makes a whole range of classic errors (workers not being able to buy back all they produce as the cause of crises, taxation as a burden on the working class, secondary exploitation of workers by banks). On one point he is open about ‘revising Marx’ (his words). Marx’s theory of interest was that it is a share of surplus value created in the value-producing sector of the economy and which the capitalists there allow to go to banks for performing a function that they would otherwise have to tie up some of their capital in doing themselves. Cleaver’s view is that interest is a payment for a service and that it is derived from the surplus value produced by bank workers.

Despite this, Cleaver recognises ‘that getting rid of money and markets entirely is not only a necessary condition for getting rid of capitalism but also desirable in its own right’ (page 228) and devotes six pages to arguing well the case for this. But then it’s downhill again as in the following sixty pages he describes various ways for gradually marginalising the use of money under capitalism which he thinks wage and salary workers (and housewives and students) should struggle for.

Besides free or subsidised services, price and rent controls, lower taxes on consumer goods, and limits on interest on consumer credit, paradoxically he also includes higher wages and overtime pay on the grounds that the more money people have, either the less time they need to work or the more they can spend on campaigning for the reforms he lists.

Despite having been a professor of economics he appears not to understand the effect of free or subsidised goods and services on wage levels: that if workers don’t have to pay the full price of something then they don’t need to be paid so much by their employer to recreate their labour power and so their money wage will tend to fall (even if their standard of living won’t). Maybe he is assuming that workers could successfully resist this. That would be in line with the basic mistake of the ‘autonomist Marxists’ of imagining that workers have more power as purveyors of labour power than they actually have.