50 Years Ago: Rosa Luxemburg and the Collapse of Capitalism

Fifty years ago on 6th January began the hopeless Spartakist rising against the Social Democrat government of Germany. It led to the brutal murder of Karl Liebknecht and Rosa Luxemburg, two well-known and courageous opponents of the first world slaughter. Luxemburg, as an opponent of both reformism and Bolshevism who understood the worldwide and democratic nature of socialism, had views on many subjects near to those of the Socialist Party of Great Britain. However, there were certain basic differences between our views and hers. The following article discusses one of them: the collapse of capitalism.

Rosa Luxemburg was murdered on January 15, 1919. Her head was first smashed in with the butt of a soldier’s rifle and she was then dumped in the Landwehr Canal. With her death the uprising of the Spartakus Bund in Berlin collapsed—as it had been doomed to do all along. In fact, the real tragedy of this affair was not its brutality but the waste of it all. Why had Luxemburg allowed herself to become involved in such a useless adventure in the first place? 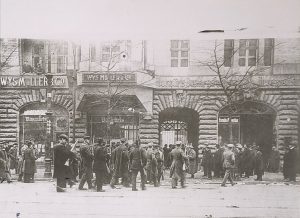 The only adequate explanation seems to lie in her conviction that capitalism had been driven to an impasse, that its internal contradictions had brought it to the point of breaking down. (….)

A week before death she was writing: “The masses are ready to support any revolutionary action, to go through fire and water for Socialism.” This, of course, was patent nonsense. The working-class in Germany had no clear idea of what Socialism was or how it could be achieved. Not only was there no chance of overthrowing capitalism, but even the limited aim of unseating the government was hopeless. ( …) Luxemburg, then, had mistaken the economic dislocation following Germany’s defeat for the ‘collapse’ of the capitalist system and, since to her the choice seemed one of a desperate gamble for Socialism or else “crashing down to a common doom’, she staked her life on the former.