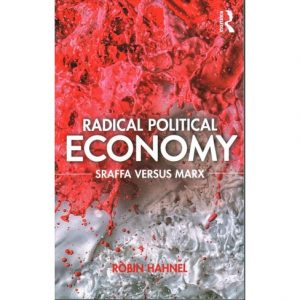 Piero Sraffa (1898-1983) was an Italian economist at Cambridge University, best known for his attempt to revive the approach of Classical Political Economy, as represented by Adam Smith and in particular David Ricardo, whose concepts Marx also employed in his criticism of them for assuming that capitalism was the natural way of organising the production and distribution of wealth rather than just a passing historical phase.

Sraffa’s main work, The Production of Commodities by Means of Commodities, was published in 1960. The title itself was already a revival of Classical Political Economy as he was using the word ‘commodity’, also inherited by Marx, to mean an item of wealth produced for sale; and capitalism is precisely an economic system in which commodities are produced by means of other commodities. What Sraffa was aiming to do was to settle some questions, left unresolved by Ricardo and Marx, about how to square a labour theory of value with an economic system where there were profits and which therefore meant that commodities did not exchange at their labour-time values, i.e., the amount of labour required to produce them from start to finish.

Sraffa’s book is based on assuming that commodities ‘contain’ labour and how the amount of this could in principle be calculated when there are profits. He explicitly states that the labour theory of value as a theory of selling price (exchange-value) is only valid when there are no profits, when the whole product of labour goes to the producer. This was Marx’s view too in an economic system he called ‘simple commodity production’ where all commodities were imagined to be produced by independent self-employed producers. Marx was well aware that, under capitalism, commodities did not sell at their labour-time values but at what he called their ‘price of production’ (a term Sraffa also used) as their cost of production + a mark-up for the going rate of profit. Sraffa goes into this in more detail than Marx was able to in his unfinished notes.

In any event, to counterpose Sraffa to Marx, as in the title of this book, is not justified. There is no evidence that Sraffa was hostile to Marx. Just the opposite in fact, as can be seen from Appendix D on ‘References in the Literature’, Sraffa had as much respect for Marx’s as he had for Ricardo’s earlier work on his subject.

Hahnel gets Marx wrong on a number of points. He commits Marx to a biological/calorie subsistence theory of wages whereas Marx recognised that there was a varying historical and social element in wages (as set out in chapter 22 of Volume I of Capital on ‘National Differences in Wages). Using such terms as ‘total breakdown’ and ‘inevitable collapse’ he attributes to Marx the view that capitalism will eventually mechanically breakdown. He accuses Marx of not identifying a flaw in capitalism that sometimes capitalists do not adopt the most efficient production methods if wages are low, whereas Marx makes this very point, regarding a stone-breaking machine invented and used in the US but not used in Britain, at the end of section 2 of Chapter 15).

Clearly Hahnel doesn’t know his Marx. He also contradicts himself when he insists that profit does not derive only from the labour-power capitalists hire while at the same time explaining ‘profits as the result of denying workers in a productive economy all the surplus goods they produce’.

This said, his book is well-presented and, despite the algebra, very readable. The final chapter in which the capitalists are put on trial accused of being parasites on the producers and their various lines of defence (abstinence, waiting, risk, etc) refuted, ending in them being found guilty as charged, is amusing and to the point.