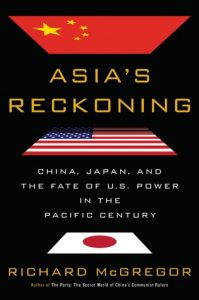 The United States and China are currently involved in a trade war, each placing tariffs on imports from the other as the US fights China’s economic rise. But a quarter of a century ago, something similar was taking place between the US and Japan, as the latter emerged as a new economic power. Japanese companies out-competed the US in high-end products such as electronics, but when the dispute turned to semiconductors (needed in US missiles) things changed: Japan agreed to give US companies a twenty percent share of the Japanese market, while the US put 100 percent tariffs on some Japanese semiconductor imports.

Disputes such as these are chronicled in considerable detail in Richard McGregor’s book, which examines the economic, political and military events and policies pursued before and during the period when China has come to surpass Japan as the main rival to the US.

One area given plenty of attention is the uninhabited island chain known as the Diaoyu in Chinese but the Senkaku in Japanese, which has an area of just seven square kilometres and was used by the US military for target practice after the Second World War. What attracts the attention of China, Japan and other countries is not the islands themselves but the resources in the seas around them, specifically fish stocks, oil and gas. So they are, or could become, extremely valuable, especially as Japan has to import almost all its energy needs and China imports a lot from Russia. As a specific example of China flexing its muscles, in 2009, their ambassador to Britain successfully warned BP off working with Vietnam on a project in waters also claimed by China. Considerable resources have been put into developing the Chinese navy, so that areas far from China can be ‘defended’.

In 2010 the Chinese economy became larger than Japan’s and so second only to the US. This was mainly due to the staggering growth in China, but also to the relative stagnation and decline in Japan. Despite the attention and resources devoted to the Middle East, Japan currently remains ‘America’s most important defense alliance’. In addition to the tariffs imposed on Chinese goods, however, Trump has complained about the vast numbers of Japanese cars and TVs imported into the US, and wondered why the US was committed to protecting Japan at all. But then, as Lord Palmerston said, countries have permanent interests, not permanent allies.