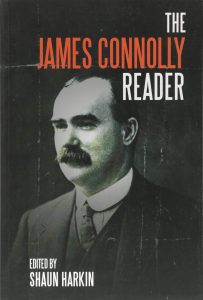 James Connolly is of interest not just because he is an Irish Nation(alist) Hero who claimed to be a socialist but also because he took part in the ‘impossibilist revolt’ in the Social Democratic Federation. This involved SDF members, mainly in Scotland and London, who were opposed to the autocratic control of the organisation by a clique around its leader, H. M. Hyndman, and to its opportunist policies. It led to a breakaway, in 1903, by those in Scotland to form the Socialist Labour Party of Great Britain and, in 1904, of those in London to form the Socialist Party of Great Britain. Connolly, who was born in Scotland but was then living in Dublin, was associated with the first group and chaired its inaugural meeting. When later in 1903 he emigrated to America he joined the SLP of America.

By this time the SLP’s leading figure, Daniel De Leon, had developed the theory of ‘socialist industrial unionism’ according to which, to achieve socialism, the working class had to organise both politically and industrially, but with organisation into industrial unions to take over the means of production being the more important. This was the original position of the IWW when it was founded in 1905, and for which Connolly was an organiser for a while.

During his period in America Connolly held this position, even after leaving the SLP.  It led him away from his earlier position that the socialist political party should be a strictly socialist one towards saying that it only needed to be a party committed to furthering the interests of the working class. Following this up, he joined the Socialist Party of America. His views in this period can be found in his 1909 pamphlet Socialism Made Easy (reproduced here). Also included in this collection, brought out to mark the 150th anniversary of his birth, is his 1910 classic Labour in Irish History.

He returned to Ireland in 1910 and was one of those behind the formation of the Irish Labour Party in 1912, intended to be the equivalent in the coming Home Rule Parliament in Dublin of the Labour Party at Westminster, i.e., a trade union pressure group. Connolly was now an organiser for the Irish Transport and General Workers Union and most of his work from then on was trade union activity, in Belfast as well as Dublin, including during the notorious Dublin Lock-Out of 1913.

In his 80-page introduction Harkin, an SWPer, says that Connolly developed a pioneering view on ‘the relationship between national liberation and socialism’ with his argument that, since in Ireland the propertied classes were too dependent on British imperialism to successfully lead the struggle for Irish independence, this task fell to the Irish working class. He may well have argued this, but he didn’t practise it.  He ended up a ‘Martyr for Old Ireland’ in 1916 in a futile insurrection led, not by the working class, but by non-socialist pure-and-simple Irish Republicans and backed by Imperial Germany. In his written ‘Last Statement’ to his daughter before he was executed by a British Army firing squad he made no mention of socialism, only of Irish freedom and ‘national rights’.

He died not for socialism but for capitalist Irish Republicanism. His sad descent towards this ignominious end can be traced in last hundred pages of Harkin’s selection.

‘The Divide: a Brief Guide to Global Inequality and Its Solutions’. By Jason Hickel, (Windmill. £9.99) 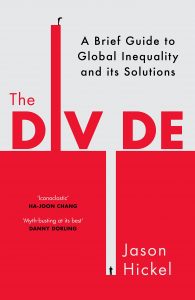 This is not a brief guide, but it is a very useful and informative one (though it would have been even more so with an index). Hickel’s account deals with the extent and origins of inequality between rich and poor countries, how it is maintained and how it might be removed.

This divide has not always existed, as around 1500 there were no big differences in living standards between Europe and the rest of the world. But European exploration and colonisation led to massive transfer of wealth as well as large-scale deaths, with around 95 percent of the population of what became ‘Latin’ America killed between 1492 and 1650. A hundred million kilograms of silver was transferred from the Americas to Europe, mostly by means of ‘coercive extraction’. Slavery also involved a vast accumulation of wealth in Europe, and thus boosted industrialisation: ‘The emergence of capitalism required violence and mass impoverishment, both at home and abroad’.

In 1820 the income gap between the richest and poorest countries was 3 to 1; around 1850 it was 35 to 1. Furthermore, there was massive inequality within the richest countries: in 1910, the richest one percent in Europe owned 65 percent of the wealth. Many former colonies became nominally independent, but they were still subject to much interference (to put it mildly) from the most powerful countries, from the 1953 coup in Iran to the mass killings in Indonesia in 1965, the coup in Ghana in 1966, the removal of Allende in Chile in 1973 and many more, all of which resulted in authoritarian governments friendly to Western interests.

Inequality in the West increased from the 1980s, and things came to a head in global terms with the Third World Debt Crisis of 1982, following which countries such as Mexico were forced to repay their loans and euphemistically-termed Structural Adjustment Programmes were introduced, which meant countries had to prioritise debt repayments and open their economies to international competition. The World Trade Organisation is one of several bodies that in effect tell poorer countries how to run their economies. These countries receive much in ‘aid’ from the wealthier ones, but these payments are dwarfed by the transfer of wealth in the other direction, via debt repayments, profit repatriation, capital flight, etc. The result of all this is a world where 4.3 billion people live in dreadful poverty, and the eight richest people have as much wealth as the poorest half of the global population combined.

The account summarised above is an excellent overview of the history of global inequality, but Hickel’s proposed solutions do not really address the causes. He advocates abolishing the debt burden of developing countries, democratising institutions such as the World Bank, making the international trade system fairer, introducing a global minimum wage and having a universal basic income. All this fits in with his odd and unsupported statement that the problem is not so much capitalism as a particular kind of capitalism (presumably its neoliberal version).

More interesting is his final chapter, which tackles environmental issues and the question of whether everyone in the world can live at the standard of the average person in the richest countries. One aim should be to achieve zero carbon emissions by the middle of this century, another to reduce total production and consumption, which can be done and still increase happiness and health. A Genuine Progress Indicator could replace GDP as a measure of wellbeing, though he sees all this as happening within capitalism. We cannot take a stand now on how such considerations would fare in socialism, but Hickel certainly provides here some ideas to think about.