How to Destroy Capitalism: Blueprint for Revolution 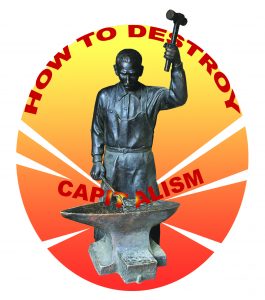 In 2016 the pressure group Corporate Watch published a book Capitalism.What it is and How Can We Destroy it? Written by a dyed-in-the-wool anarchist, it didn’t provide a satisfactory answer to the second question, just that if enough individuals did their anarchist thing that would do it. Nor is it a question of simply destroying capitalism but of replacing it with a society that does serve human needs and interests. Still, how to get rid of capitalism is a good question. But, first, what is capitalism?

From a purely economic point of view, capitalism is a process of ‘expanding value’, as the first translators of Marx’s Capital rendered the German word he had used (modern translations translate the same word as ‘valorisation’ but that doesn’t capture Marx’s meaning so immediately).

For Marx, capital was not simply items of wealth used to produce more wealth, but a sum of values used to create more value. This is why he logically began Capital by defining what he meant by ‘value’. Basically, value was the form an item of wealth assumed when it was produced for sale and which governed the proportions in which it exchanged with other items of wealth produced for sale. For Marx, its size reflected the amount of labour needed on average to produce it from start to finish.

Capital, then, is the value of a combination of items of wealth – buildings, machines, raw materials, intermediate products, energy, etc – plus the value equivalent of the labour-power needed to use them to produce other items of wealth. In money terms, capital is a sum of money used to produce a greater sum of money. The aim of capitalist production is to end up with more money (more value) than before. Hence capital is ‘expanding value’. For Marx, the source of the new value was the extra value added by those who did the actual producing over and above what they were paid as wages (the value of their labour–power).

Actually, of course, capitalism is not just an economic process; it is one embedded in social institutions and can only take place through them as the action of particular people who Marx described as ‘functionaries of capital’. These are those who own the factories, machines, etc that make up the means of production.

Originally, when capitalist production started, means of production were the property of (units of capital were embodied in) individuals or a small group of partners. But, as capitalism developed, the amount of money required (the value of the means of production) grew too large for an individual or partners to mobilise. At that point, reached by the middle of the 19th century, the law had to be changed to permit capital to be embodied in a ‘company’ (Britain) or ‘corporation’ (US). This is a legal form in which means of production are collectively owned by shareholders whose liability to pay for any debts if things go wrong is limited to the amount of their shareholding. Today, most capital in terms of value is embodied in this type of legal entity.

In the limited liability company the state has created a legal entity to embody capital that has a fictitious personality in that it can act as if it were a person, by entering into contracts with real persons and with other companies as legal persons. Joel Bakan in his 2004 documentary and book The Corporation takes up this fiction and shows that, if a company really were a person, that person would be diagnosed as a psychopath. This, in view of their relentless pursuit of a single aim – that of making as much profit as possible – to which everything else is subordinated and regardless of the effect on others.

This is a valid point but it is not the legal form of a corporation that imposes this behaviour on its directors even though it lays this down as their legal duty. The legal form reflects the underlying economic process of any capital’s need to expand its value. It is economic reality that determined the law, not the law that has determined economic reality. This is why no change in company law can change the way in which the capitalist economic system works.

In fact, the other legal forms that have been legislated for to embody capital – nationalised industries, mutuals, cooperatives – are under the same pressure to seek to maximise profit as a condition for surviving as an economic institution embodying capital. It is just that in their case the trustees – the functionaries of capital – are different: government appointees, even worker-elected boards. As are the rules for distributing profits that are not re-invested (not added to the original value): they cannot be distributed as dividends (though they can be, and are, as bloated salaries).

That the main form in which most capital is embodied today is a state-created legal entity provides a clue as to one step in replacing capitalism – winning control of the state so as to be in a position to ‘uncreate’ these legal entities. This done, the means of production cease to be private property and become nobody’s property; which is the same as saying they become everybody’s common property.

This new reality too has to be embodied in social institutions. Political action to abolish corporations presupposes that there is a majority in favour of this but also that this majority is organised on the ground ready to take over control of the now commonly-owned means of production and operate them.
It is not as if capitalist shareholders own the means of production vested in these legal entities in the same way as they personally possess personal items such as clothes, houses, or cars that can be physically taken from them. This is not what needs to be done in the case of the factories and machines owned by corporations as the capitalists who own them don’t do so by virtue of physically possessing them but by virtue of holding pieces of paper saying that they are shareholders in a legal entity with a fictitious personality. The obvious way to end their ownership is to render these pieces of paper worthless by dissolving the artificial entity.

Workers in a factory could take it over but that wouldn’t result in common ownership by society as a whole. At most it would result in worker ownership. To achieve society-wide common ownership requires society-wide action. The easiest way to do this is by political and workplace organisation, political to end the legal status of corporations and workplace to continue to operate the means of production.

The alternative, that used to be more widely proposed and still is by those who haven’t thought the matter through, would be for some society-wide economic organisation to proceed to take over the means of production in a general workplace occupation while ignoring the state. This would be stupid when there’s an easier way. If a majority favour taking over the means of production, that majority would also be able to take control of political power through the ballot box. On the other hand, if they won’t vote for it they are not likely to take the bolder step of actually doing it. It is true that, given a majority in favour of making the means of production commonly owned by society, ignoring or trying to by-pass the state might succeed in the end but at the price of unnecessary chaos and violence. Why break into a house when you can get the keys to the front door?

When the means of production cease to be owned by legal entities and become common property, at the same time they also cease to be capital in that they can now be used to produce directly and solely to meet people’s needs. The economic process – the economic imperative – to ‘expand value’ would no longer impose itself. Capitalism will have been abolished.