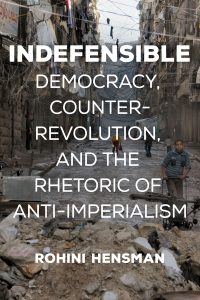 This book sets out to expose the hypocrisy of those the author calls ‘pseudo-anti-imperialists’.  She criticises them for their opposition to Western imperialism only and for supporting all sorts of oppressive regimes on the grounds that they are opposed to the West. When the West is involved in military action, these ‘anti-imperialists’ support the opposing side whatever the nature of their regime. She instances and goes into detail about Serbia, Iran, Iraq and Syria. Argentina, Libya and North Korea could be added.

What is odd is that, although Russia doesn’t claim to be socialist any more, some continue to exclude it from anti-imperialist criticism, as she documents in detail over Ukraine and Syria. She has no illusions about the former USSR. It was, she says, state capitalism, making the additional point that a socialist revolution was not possible there in 1917. Not that knowing that Russia was state capitalist necessarily rules out pseudo-anti-imperialism. The Stop the War Coalition is supported by people who know this, yet while it loudly criticises bombing in Syria by the West, Turkey and Israel it is not very vocal about bombing there by Russia and the Syrian government. She mentions Corbyn as being in this tradition.

This is a fair criticism, and one we have long made ourselves.

Anti-imperialism is a slippery concept because its meaning depends on how you define imperialism. This ought to mean the policy of acquiring an empire, which European states joined by the USA and Japan increasingly pursued in the latter part of the 19th century. This was a development that needed analysing. Those in the Marxist tradition tended to give an economic explanation (acquiring a protected market, need to export capital). Lenin elevated imperialism to ‘the highest stage of capitalism’ and that’s when the rot set in.

It wasn’t that his analysis of the First World War as a war between imperialist powers for the re-division of the world was wrong, but the political implications he drew from this once he himself was in control of the Russian state. First, he developed into a full-blown theory his idea that the parties of the Second International had supported their governments in the war because the section of the working class they represented benefitted from imperialism in terms of higher wages and social reforms. Then, the revolution in Europe having failed to materialise (it was never on the cards anyway), he saw in the rising of ‘the peoples of the East’ against imperialism a way to relieve pressure on the Bolshevik regime in Russia.

Hence ‘anti-imperialism’ became the policy of the Russian state and its supporters abroad. Under Stalin after the Second World War, it became opposition to the West, the US-led bloc that was its rival. It was hypocritical because by then Russia too was manifestly an imperialist power, having acquired the Baltic states and parts of Poland under the 1939 Nazi-Soviet Pact and, after the Second World War, Eastern Europe, apart from the empire in Central Asia it had inherited from Tsarism. Hensman aptly writes of ‘the Russian State Capitalist Empire.’

Her starting point is that, as Rosa Luxemburg put it out in a passage she quotes:

‘Democracy is indispensable to the working class because only through the exercise of its democratic rights, in the struggle for democracy, can the proletariat become aware of its class interests and its historic task.’

From which she concludes that it is in the interest of workers in countries which do not have political democracy to obtain it, whether or not the government there is ‘anti-imperialist.’ True, but the way to do this is not to support one capitalist group against another either in politics and certainly not in war, nor by the various changes to the UN she naively suggests in the final chapter. 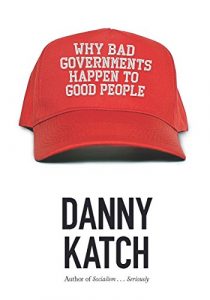 This is the follow-up by US satirist Danny Katch to his Socialism . . . Seriously. It is trailed as a ‘sharp-witted indictment of our broken political system and a vision for a socialist alternative that is truly by and for the people’.

This is half-true in that it is indeed perceptive and funny in parts and recognises well enough many of the issues facing a Trump-led America, issues that are replicated to varying degrees in other countries too. But the vision is blurred and is ultimately a prospectus for a state-run capitalism that aims to build on the popular support generated by Bernie Sanders, but which could be expressed through the creation of workers’ councils or soviets. This, of course, is really the tired old formula of the Bolshevik coup in Russia of 1917, a formula more long-lived than Angel Delight or Pot Noodles but ultimately less successful than either.

The problem with this political approach has essentially been twofold. Firstly, the idea that the socialist revolution can be created by a minority vanguard party of professional revolutionaries that can lead the masses to the promised land (though it is noticeable Katch goes a little light on this in full realisation that talk of people power and democratic action is likely to resonate more with his target market).

Secondly, that what is advanced as ‘socialism’ is really a set of radical reforms of capitalism that the vanguard leadership know can never be enacted within the existing system, and which they hope will then pave the way for mass unrest and their minority coup. This then can bring about the dictatorship of the vanguard party running a nationalised ‘siege’ economy.

Sadly, as history has shown on many occasions, there’s nothing remotely funny about that at all . . . and the anti-Trump forces in the US would have to be desperate indeed to even consider it. 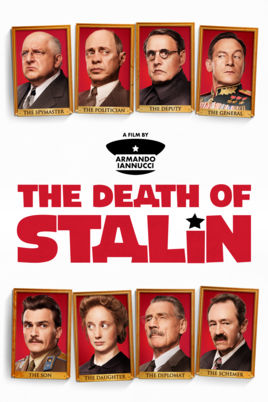 Based on the French graphic novel, La Mort de Staline, this is a dark satire which grimly exposes the tortuously tedious and hypocritical nature of Stalin’s regime during ‘The Great Terror.’ Director and co-writer Armando Iannucci builds on his already strong pedigree in this genre, having made the BBC TV political sit-com series, ‘The Thick of It,’ amongst other satirical productions; most recently a successful political series, ‘The Veep’, which aired on US cable network HBO. All of which has led him to be dubbed: ‘the hard man of political satire.’

Iannucci’s treatment of Stalin and his henchman has echoes of the lampooning of Hitler by Mel Brooks in his 1983 film, ‘The Hitler Rap’, but Iannucci is more unremittingly hard-hitting than Brooks. As a result a number of former Soviet Union countries have banned the film, including Russia, where the Culture Ministry cited the desecration of such national symbols as the Soviet hymn and the insulting portrayal of Field Marshall Zhukov, hero of the Red Army, as a bumbling idiot.

The film has an impressive cast to deliver a master class in political satire through a series of show-like set pieces and lively dialogue and superb comic timing; a particularly poignant example of which is the denunciation by Molotov (Michael Palin) of his wife in the name of party dogma. The stage is set when Stalin suffers a brain hemorrhage and collapses in his study where he remains unconscious on the floor whilst The Council of Ministers assemble, already plotting against each other.

This dark burlesque of political intrigue and back stabbing between the main contenders for power – Khrushchev (Steve Buscemi), Molotov (Michael Palin), Malenkov (Jeffrey Tambor) and Secret Police Chief Beria (Simon Russell Beale), provide the foreground; whilst the gruesome aspects of mass murder, torture and executions provide the backdrop. A delicate balancing act between comedy and horror.

As the balance of power see-saws between the protagonists, the gruesome realities of Stalin’s reign are laid bare. The strong performances of the central cast, plus characters such as Field Marshall Zhukov (Jason Isaacs) and Stalin’s alcoholic son, Vasily (Rupert Friend) and daughter Svetlana (Andrea Riseborough) – coupled with Iannucci’s attention to historical detail – makes this an impressive production.

Khrushchev, as the eventual winner in the power grab, ushers in a less bloodthirsty period in Soviet history, but still far from the hopes and dreams of the heady days of the 1917 Revolution. One glaring reason for the rapid disintegration of these communist ideals into a pernicious version of state capitalism is that you cannot have socialism in one country; a fact soon recognised by the leading Bolsheviks, including Lenin. Perhaps the more compelling lesson is the importance of scrupulously adhering to democracy in the pursuit of socialism, else to risk careering headlong into another version of ‘The Great Terror.’ 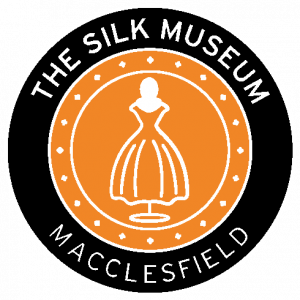 From the sixteenth century Macclesfield had a button industry, which developed into one making silk buttons and later into a full-scale silk industry. This also applied to other nearby towns, such as Congleton, but Macclesfield remained the main centre. Its School of Art, opened in 1851, trained designers, and its former buildings are now the site of the Macclesfield Silk Museum, which has informative displays relating to design and manufacturing processes, examples of products and a gallery with looms and other machinery.

Silk throwing is the preliminary stage of manufacturing, making single fibres into usable thread for weaving. The various processes of throwing and weaving were originally carried out in workers’ homes but gradually transferred to mills and factories. The mill workers were mainly women, with men mostly performing skilled and supervisory work, but there was also much child labour, with over a quarter of the workforce being children in 1873. Wages were in general lower than those in cotton mills. There were many ups and downs in the silk industry, partly due to overseas competition and the rise of artificial fabrics such as rayon, sometimes offset by bans on imports. Trade flourished during the Napoleonic Wars as competition shrank, but then declined afterwards. In the Second World War, the silk industry emphasised the production of parachutes and escape maps, with much trouble taken to secure supplies of raw silk.

One consequence of the booms and slumps in the silk industry and resulting periods of unemployment was the emigration of workers. One man from a family of Macclesfield mill owners set up a silk factory in Paterson, New Jersey in 1845. A temporary display at the museum has some information about the silk industry there but says very little about the notorious strike of 1913, which saw 1,850 workers arrested and two people killed (one a striker, shot by a strikebreaker).