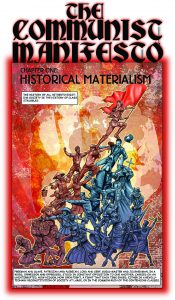 One of many examples is the BBC – Broadcasting Bourgeois Canards since 1922. Their advertisements want us to believe otherwise, to swallow the lies with little or no question. ‘Take away the noise, the fury, the fighting voices, the distortions, cosmetics, the colour and the flashy effects, but most of all, you can take away the lies, the slander, the misrepresentations that seek to pull us apart, and then … you can find out what is actually happening, and when you find that, then you will find BBC News[peak].’ Stop consuming their canards – take the red pill of socialist understanding instead. ‘All that is solid melts into air, all that is holy is profaned, and man is at last compelled to face with sober senses, his real conditions of life, and his relations with his kind’ ‘He becomes an appendage of the machine, and it is only the most simple, most monotonous, and most easily acquired knack, that is required of him. Hence, the cost of production of a workman is restricted, almost entirely, to the means of subsistence that he requires for his maintenance, and for the propagation of his race’ (The Communist Manifesto, 1848).

‘Lookups for socialism spiked on June 27, 2018, following the Democratic primary victory for a congressional seat in New York City by Alexandria Ocasio-Cortez, defeating 10-term incumbent Rep. Joe Crowley’ (merriam-webster.com, 27 June). But unsurprisingly the same dictionary defines socialism as ‘a way of organizing a society in which major industries are owned and controlled by the government rather than by individual people and companies,’ and democratic socialism [there is no other kind!] ‘is a form of government in which state regulation (without state ownership) would ensure economic growth and a fair distribution of income.’ Socialism, as originally used by the followers of Robert Owen, appeared for the first time in their Co-operative Magazine of November 1827 and later made famous by Marx, will be a system of society where production takes place directly for human needs, where money, governments and states do not exist. This is still the only sensible way of understanding socialism, and not the Alice in Wonderland world where words mean whatever anyone says they mean. Ocasio-Cortez is better defined as a social democrat, a term associated with the German politician Eduard Bernstein. He rejected socialism’s revolutionary and materialist foundations and advanced the position that it should be grounded in ethical and moral arguments and achieved through gradual legislative reform.

Not so strange bedfellows

“There’s no way around it, Socialism and Communism are kissing cousins. The only difference is when this concrete strategy begins to fail, that’s when somebody grabs a gun and Socialism goes to Communism. Socialism really is just diet-Communism,” said Glenn. “Putting ‘democratic’ before Socialist … makes it seem, I dunno, a little less Stalin and more Bernie Sanders” (theblaze.com, 29 June). The spectre haunting the likes of Glenn Beck is not that of socialism or communism but state-capitalism. He and Ocasio-Cortez are clueless. During one of her interviews she at ‘first tried to argue there was a significant difference between her beliefs and socialism.’ Indeed, but finding herself in a hole she started digging: ‘… there’s a huge difference between socialism and Democratic socialism .. .Democratic socialism, and really what that boils down to me, is the basic belief that I believe that in a moral and wealthy America and a moral and modern America, no person should be too poor to live in this country’ (freebeacon.com, 29 June).

Defenders of the status quo

‘There are, besides, eternal truths, such as Freedom, Justice, etc, that are common to all states of society. But Communism abolishes eternal truths, it abolishes all religion, and all morality, instead of constituting them on a new basis; it therefore acts in contradiction to all past historical experience. ‘ ‘The Communist revolution is the most radical rupture with traditional property relations; no wonder that its development involves the most radical rupture with traditional ideas.’ ‘Let the ruling classes tremble at a Communistic revolution. The proletarians have nothing to lose but their chains. They have a world to win. Working men of all countries unite!’