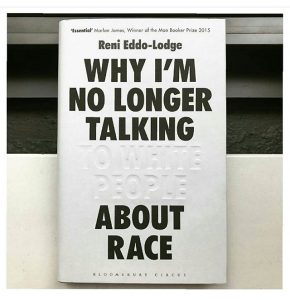 Reni Eddo-Lodge: Why I’m No Longer Talking to White People About Race. Bloomsbury. £8.99.

Most people will be familiar with the idea of institutional racism, whereby some organisation (the police, maybe) discriminates against part of the population on ethnic grounds. Eddo-Lodge widens this to the concept of structural racism, which goes far beyond traditional institutions to cover much of society: ‘It is not just about personal prejudice, but the collective effects of bias.’

So black children do less well at school and are more likely than the general school population to be permanently excluded. Black university students are more likely than others to receive the lowest grade of degree. This discrimination continues into employment, with higher rates of unemployment among black people. Research has shown that applicants with African- or Asian-sounding names are less likely to be invited for a job interview. In contrast is white privilege: ‘if you’re white, your race will almost certainly positively impact your life’s trajectory in some way.’

The author also deals with the concept of intersectionality, which may involve black women being subjected to two kinds of discrimination, racism and sexism. Some object to this as a piece of useless jargon, while Eddo-Lodge sees the backlash against it as ‘white feminism in action’, which claims not to see race but in fact positions whiteness as the norm. Feminism, she says, should not leave anyone behind, and the most popular current versions of feminism may not able to achieve this.

A chapter on race and class sounds as if it might be interesting. It starts off by considering the Marxist analysis of class, but completely misunderstands this by saying that, if you are paid monthly and own your own home, you are middle class. But then it adopts the seven-class analysis of the Great British Class Survey, with black people mainly found in the more impoverished groups. The author says: ‘if you are born not white in this country, you probably haven’t been born into wealth.’ But this misses the obvious point that the vast majority of the population are not born into wealth. There is nothing here about the capitalists and the privileges they and their children enjoy.

Eddo-Lodge records that when she gave a talk about racism at a sixth-form college, one (white) girl asked, ‘When do you think we’ll get to an end point?’. Her response is that you cannot skip to the end point without having the difficult conversation first. But this is a very unsatisfying dismissal, and it is not even clear what she means by skipping to the end point. After all, you have to have an idea of what to aim for before having the difficult conversations that will help to get you there.

There is no doubt that racism is an important part of current British capitalism. This book says a great deal about how this plays out, but it does not go far in criticising the whole system. 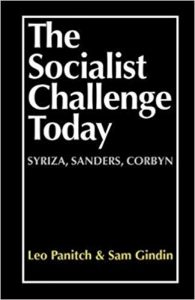 This pamphlet-length book is an attempt to draw a distinction between ‘Social Democracy’ (which seeks merely to run capitalism better) and ‘Democratic Socialism’ (which seeks to transform capitalism away). The authors see Bernie Sanders’ campaign to get the Democrat presidential nomination, the rise of Syriza in Greece, and the election and re-election of Corbyn as leader of the Labour Party as examples of the latter.

These do represent a change in conventional politics but what the authors forget is that what they call ‘Social Democracy’ also originally set out to transform capitalism away. However, through the experience of being in government under capitalism, they ended up as a mere alternative team for managing capitalism. Instead of them transforming capitalism, capitalism transformed them.

What the authors call ‘Democratic Socialism’ is essentially a return to the original aim of ‘Social Democracy’ anyway. There is no reason to suppose that their fate will be any different. Panitch and Gindin quote, and endorse, Tony Benn as saying that any serious ‘socialist’ strategy has to begin from
‘the usual problems of the reformer: we have to run the economic system to protect our people who are locked into it while we change the system.’

This is accepting that a left-wing government would have to be running capitalism for a while. But both the theory and the experience of how capitalism works show that it cannot be made to work in the interest of the majority class of wage and salary workers; and that any government that tries this may well, at the beginning, be able to introduce a few favourable reforms but in the end will have to ‘run the economic system’ on its terms, by giving priority to profit-making over spending on reforms.

The authors have a different explanation for the failure of Social Democracy – not that no government can change the economic laws of capitalism but that previous left-wing governments neglected to transform the state. Instead of mobilising their supporters in the country by establishing popular committees to oversee and implement reforms decided at government level they left the existing state apparatus as it was. In other words, a political rather than economic explanation, a variation on the familiar theme that left-wing governments fail because they were not determined enough.

This is in fact the main theme and policy recommendation of the book. But it doesn’t stand up. Not even popular mobilisation can overcome or change the economic laws of capitalism. The Chavez government in Venezuela tried this but still failed. In fact it is instructive that Panitch and Gindin chose not to include Chavez alongside Syriza, Sanders and Corbyn.
ALB 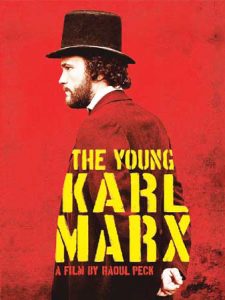 This is a German film by a Haitian director. The timing of the film – 200 years after the birth of Marx – will be intended to piggyback the publicity around this anniversary. It will also benefit from the recent general upsurge in interest in Marx and socialism after almost 30 years in the wilderness following the collapse of the Soviet Union.

The film, mainly spoken in German with English sub-titles, focuses upon Marx (August Diehl) and Engels (Stefan Konarske) during the years of the formation of their friendship from 1843 through to their collaboration in the drafting of the Communist Manifesto in 1847; thus dealing with a short but vital period in their lives and stopping short of depicting the revolutions in Europe in 1848. Marx’s wife Jenny (Vicky Krieps) and Engels’ wife Mary Burns (Hannah Steele) have significant supplementary roles, predominantly supporting their men.

The film opens in Germany when Marx is arrested for his criticism of new laws which take away the traditional right of peasants to gather firewood on a landowner’s property. He is exiled to Paris where he meets Engels and then to Brussels and finally London. The film captures their personal and political development as they wrestle to articulate their ideology.
Whilst Marx battles with the authorities and contends with poverty Engels clashes over his father’s treatment of the workers at his mill; the conditions of which are vividly captured in the cinematography. The film illustrates how the two young men develop their economic theory of the social relations of production through personal contemplation and in debates with such figures as Proudhon, Bakunin, and the Young Hegelians. In the process Marx moves away from philosophy – which he increasingly regards as a sterile discipline pre-occupied with interpreting the world – towards his theory of political economy, in order to act upon the world to change it.

The film has the feel of a biopic period piece which would be more at home as a BBC drama than an epic of the big screen. The volume of historical events seems to be turned down, effectively muffling these momentous times. Raoul Peck said that he made the film for young people. Perhaps this is why it has the feel of a soap opera. It was interesting to see these historical figures brought to life on the big screen and humanised through a window onto their private lives, rather than either lionised or demonised for their political beliefs; but overall the film was enjoyable, rather than spectacularly informative or stimulating.

It ends with a montage of video clips from the twentieth century depicting momentous events of social upheaval, to the musical accompaniment of Bob Dylan’s: ‘Like A Rolling Stone.’ Perhaps this is a further nod to the Millennials, although a more twenty-first century resonance for this audience might have been provided by Marx’s quote from the nineteenth century: ‘There must be something rotten in the very core of a social system which increases its wealth without diminishing its misery.’

Given that it is a rare event for the film industry to grasp such a difficult and controversial topic it feels like a missed opportunity. Perhaps there will be a sequel; in celluloid and in real life.

The Sea Is the Limit

With a title that refers to the saying ‘The sky’s the limit’, York Art Gallery is currently running an exhibition dealing with issues of migration, refugees and borders, on until early September. It contains works by a number of artists from various countries, using several types of installation.

The sea can be both a barrier to travel but also a means of escape, and the works on display refer to both these concepts. Nidhal Chamekh (who is from Tunisia) emphasises the barrier aspect with drawings of the refugee camp in Calais, including tents and other self-built shelters. Nick Elwood depicts those who live or lived in this camp, focussing on them as individuals rather than just as part of the influx of migrants that so scares some people. As a reminder of what some people are escaping from, Brian Maguire displays paintings of ruined buildings in Syria, which show graphically the devastation caused there by many years of fighting.

Halil Altındere offers a novel idea of a ‘Journey to Mars’, using a virtual reality headset to show a possible sanctuary for refugees in space: demonstrating perhaps how unrealistic some of the demands of those who want to clamp down on migration are.

It is not a large exhibition but it is a thought-provoking one. In the library at Manchester Metropolitan University is another small but informative display, ‘Oceans Apart’, dealing with transatlantic travel between 1870 and 1940. The direct link to the York exhibition is that of emigrants, many from Ireland, who travelled in crowded conditions in ‘steerage’. At one time such migrants were welcomed as a way of populating the unworked fertile lands of the so-called US cotton states, but later it was claimed that many of them lived in unhealthy conditions in the big cities.

In contrast were the grand tours for the wealthy, on liners run by companies such as Cunard and P&O, advertised on colourful posters, a variety of which are displayed here. The ultra-rich passengers enjoyed suites with their own bathrooms, a far cry from the crowded conditions endured by most travellers.