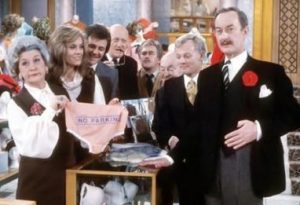 has taken to reach us. And the last of the innumerable workers who contributed to getting it to us is often the ‘shopgirl’. Shops and their staff, therefore, have a crucial place in the economy, on the front line of consumerism, as highlighted by the BBC’s Shopgirls: The True Story of Life Behind The Counter.

This documentary series focuses on how the role of the shopgirl has changed over the decades, and the wider trends behind this. Presenter Pamela Cox, professor of sociology at the University of Essex, tells the story in an engaging, cheery way, linking up personal accounts with the bigger picture.

Shop work was for men only until the mid nineteenth century, and at least one woman (dubbed a ‘romantic freak’ in the press) twice disguised herself as a bloke to get a job in a shop. The ever-increasing number of mines and factories which were springing up led to an ever-increasing number of stores to sell their products in. This meant more people were needed for the labour market, so the proportion of women employees grew. The widespread assumption that women were more suited to domestic duties put them at a disadvantage when competing for jobs, meaning they ended up in low-status roles, especially in shops. Many shop staff ‘lived in’, meaning their job came with accommodation: usually bleak, strictly-run dormitories. By providing accommodation, employers could both keep and control their staff. Working hours were long, pay was low, and there was constant pressure to perform. ‘The more obsequious and helpful the assistants were, the better you did [as a business]’. Many of their tasks were monotonous and useless, such as winding and unwinding ribbons to give the impression of busyness. Lengthy days without being able to sit down were called ‘the standing evil’, one of many damaging effects on shopgirls’ health detailed in the 1884 report Death And Disease Behind The Counter. Despite the government knowing about the harm which shop work caused, little changed for decades.

One group aiming to improve conditions was the Co-Operative Women’s Guild, which was founded in 1883 and only closed in 2016. It was set up to provide mutual support, not only for work-related issues, but also with education and welfare. However, many workers were reluctant to organise together, not least because joining a union could lead to getting the sack. Margaret Bondfield was a prominent member of the National Amalgamated Union of Shop Assistants, Warehousemen, and Clerks who campaigned for union membership and also wrote a series of articles exposing the shop worker’s lot. In her later career, she sided fully with the establishment, becoming the first female cabinet minister when she was appointed Minister of Labour in 1929.

By the end of the nineteenth century, the rising number of women employed in shops had reached nearly a quarter of a million. In 1909, a branch of Selfridges opened in London, its stylish brand imported from America, along with working practices uncommon in Britain. Selfridges’ shopgirls didn’t live in and were trained to be more confident and less deferential. Grand shops with showy window displays were a visible sign of the growth of commercialism during the twentieth century. Perhaps it was because of this that Suffragettes targeted shops by lobbing bricks through their windows.

During both world wars, men were conscripted and more women joined the labour market to replace them, often taking roles still not considered ‘women’s work’, which in the retail sector meant managerial positions. And when each war ended, men returned to their old jobs and many women returned to the home.

By the early ‘50s, three quarters of a million women worked in retail. The way shops were run continued to follow trends which began in America, such as personality-sapping training in ‘customer service’ and the self-service store. The idea that customers would have to go to all the trouble of choosing things from a shelf, dropping them into a basket and actually carrying them to the counter took a while to catch on in Britain. Before self-service, the customer would go to the counter and the shopgirl would encourage them to buy whatever, measure out how much they wanted, and then wrap it up. The packaging on the goods lining the shelves did the same job, starting the shift towards the shopgirl role meaning shelf-stacking and sitting bored behind a till.

Not so for a shopgirl in a with-it fashion boutique in the ‘60s, though. They were hired to look fab and hang out with the customers, with any hard selling being seriously uncool. But the groovy image of the boutique didn’t convince everyone. In the early ‘70s, feminist magazine Spare Rib published a report on how shopgirls in boutiques were exploited, and the Angry Brigade bombed a branch of Biba, accompanied by a statement that criticised its staff for their uniformity. But it was changing shopping habits which had a greater impact on the boutique’s decline, as they were squeezed out by the growth of department stores and clothing chains. And into the ‘80s, Thatcherite policies like deregulation of planning and employment laws encouraged the shift towards supermarkets and out-of-town malls.

The programme crowbars in a mention of Margaret Thatcher’s early years living above a shop in Grantham, which Cox ridiculously claims taught her ‘that the power lay with the customer. She believed in the “right to buy” in the broadest sense, that the customer should have what they wanted when they wanted it’. It’s doubtful that Thatcher had such a naïve view of capitalism, although she probably wanted us plebs to believe it.

Today, retail workers are the largest group of private sector employees, almost two thirds are women and almost half work part time. Staff today cite pressure to perform, low pay and the stigma of being a shopgirl as problems, as others have in previous times. The efforts of unions, campaigners and reformists haven’t been able to create ideal conditions for shop staff. As the programme shows, wider forces such as the profitability of emerging ways of shopping, and wars, have done more to shape how shop work is carried out. And it’s still changing: now, the role of the shopgirl is being pushed out by the popularity of online shopping and the spread of those annoying self-checkouts.