Brexit: will it all be a fuss about nothing? 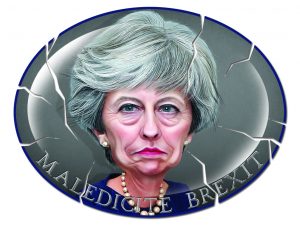 Brexit: will it all be a fuss about nothing?

‘IAIN DUNCAN SMITH: Cabinet’s Brexit proposal is a betrayal of 17.5 million voters who wanted to take back control of their own laws, borders, money and regulations’, was the heading of his article in the Mail Online on 8 July. That’s only his opinion. Actually, 17,410,742 voted ‘Leave’ to the question on the ballot paper ‘Should the United Kingdom remain a member of the European Union or leave the European Union?’ while 16,141,241 vote ‘Remain’. Strictly speaking, then, what there was a majority for, was for the UK to withdraw from the Treaty under which it joined the EU and so from the EU’s decision-making institutions (Commission, Parliament, Court of Justice, etc).

Iain Duncan Smith may have voted Leave because he wanted the British capitalist state to take back formal control of UK ‘laws, borders, money and regulations’. Many others may well have done so too, but others will have voted to withdraw merely from the political side of the EU project. As the Tory MEP, and prominent Leave campaigner, Daniel Hannan noted, one argument used to attract Leave voters was that things had changed since they had voted in the 1975 referendum to confirm staying in: ‘I voted to stay in the common market. No one ever mentioned a political union’ (Spectator, 28 April). It will only have taken 634,751 (half the difference between the Leave and Remain votes plus 1) to have been convinced to vote Leave on this ground and Iain Duncan Smith’s claim that a majority voted for what he wants falls.

Hannan himself is pretty relaxed about just withdrawing from the EU’s political institutions as long as the UK has some scope to do its own trade deals, writing on a Tory discussion forum:
‘A 52-48 outcome pointed to some sort of association that stopped short of membership. Britain would keep most of the economic aspects of the EU while losing most of the political ones … We’d end up very broadly, in an EFTA-type arrangement à la Suisse’ (Conservativehome, 10 May).

We can leave these two high-profile Leavers to slug it out. The Tory party can split over the issue for all we need to care.
People will have voted Leave for all sorts of reasons – to kick out the Poles, to do down the government, because they believed the promises that they’d be better off, to protest against their personal economic plight. Who knows? In the end it doesn’t matter why, since the outcome will depend on jostling between different sections of the capitalist class.

Most of them were in favour of Remain. A minority, mainly financiers who didn’t want their dealings to be regulated by the EU (and who largely financed the Leave campaign), favoured Leave. Perhaps unexpectedly, they won. Ever since, the majority section, and the politicians who represent them, have campaigned and lobbied to limit the damage to their interests. The plan agreed at Chequers on 6 July goes a long way to catering for their interests. It is more or less what Hannan envisaged as a compromise between the two sections of the capitalist class, even if Jacob Rees-Mogg, the cartoon toff – Lord Snooty in the Beano – doesn’t like it. But then, he’s a financier with interests in Hong Kong.

A ‘customs union’ is an arrangement between capitalist states under which there is tariff-free trade between them. A ‘single market’ takes this a step further by also removing non-tariff barriers to free trade such as differing technical, safety and environmental standards. This means that trade within the area can be ‘frictionless’ as there is no need for border checks to see if the goods conform to these standards since they are the same in all the participating states. Another way of defining a ‘single market’ would be that it is a customs union with a ‘common rulebook’.

At Chequers the government agreed that the UK should in effect stay in the EU single market for goods (if not services). It is what the manufacturing section of the capitalist class, as represented by the CBI, wanted, even if it won’t be as good for them as now since they won’t have a say, via the government, in drawing up future additions or amendments to the common rulebook.

Trump had a point when he blurted out that this could sink a US-UK trade deal in goods. There would be no point. As he said, the US would deal with the EU as what was agreed with them would apply to the UK as part of the single market:
‘If they do a deal like that, we would be dealing with the European Union instead of dealing with the UK, so it will probably kill the deal’ (Sun, 13 July).

He’s not all that badly briefed. The government replied that he hadn’t read the small print, and it is true that the Chequers proposal does come up with a novel way for the UK to be able to do trade deals with non-EU countries, if any are interested. Normally, a customs union (which is what a single market implies) involves a common external tariff against imports into the area. The government is proposing that this should only apply to goods intended for parts of the single market other than the UK. So, as now, the UK would collect the common tariff on these goods entering the UK (and pass the money on to the EU), but not on goods from outside the EU intended for the UK market only.

In theory this might work, but it wouldn’t make a trade deal only with the UK that attractive since the EU market is much larger. Conceivably the US might agree to a deal that would allow chlorinated chickens and GM foods to be imported into the UK but there would have to be some way of preventing these getting into the rest of the single market by, for instance, being smuggled across the Irish land border.

It might work if the EU agrees to go along with it. The EU might if they can get guarantees against smuggling but they can be expected to insist on the Court of Justice having a decisive say in any disputes. And there will have to be a deal rowing back on the free movement of people (incidentally, one of the few benefits of the EU for ordinary people) towards the free movement for employment that was part of the original Treaty.
Services (which are mainly financial) are to be excluded from the common rulebook. This should please those financiers who funded the Leave campaign – they won’t be subjected to EU regulation. On the other hand, less shady financiers won’t be happy as they will be excluded from some trading with the EU. To get round this they will have to move a part of their business from London to Frankfurt or Paris or Dublin but no doubt they will be able to live with this. And maybe they will bargain US access to providing services to the NHS for more access to Wall Street.

One thing that won’t happen is the UK crashing out of the EU with no deal. That would provoke an instant economic crisis that would have global consequences, as well as likely to re-ignite the Irish Republican armed struggle in North Ireland. It’s in nobody’s interest. Even those who feign to believe that ‘no deal is better than a bad deal’ don’t really believe this. It’s only bluster to try to strengthen the UK’s negotiating hand.

So, in the end, it looks as if it’s all going to turn out to be a fuss about nothing. Britain will stay in the single market and business will continue as usual. Maybe many of those who voted Leave will feel betrayed but they would also come to feel betrayed, if the hard Brexiteers had their way, when these cynical ambitious politicians failed to deliver on their promises of a better life. They wouldn’t be able to deliver because, no more than a change of government, can a change of trading arrangements make capitalism work in the interest of wage and salary workers and their dependants.