Strikes and go-slows are an established part of British Rail life—a comment on the wages, conditions and prospects of a job on the railways.

Commuters who as a result every so often wait for trains which do not arrive, or who when they are lucky travel to work in carriages packed to suffocation, cannot be expected to welcome militant action by the railwaymen. But if they have time and patience, they should consider one or two facts.

The railwaymen are only struggling to improve conditions of employment which are abysmally low. As the recent go slow showed, the railways need an enormous amount of overtime for their efficient running—and the workers also depend on the overtime to make up their wages. 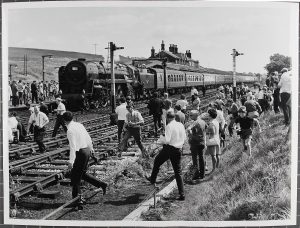 The commuters are also engaged in this struggle, although many of them may not do so in an organised way and would not dream of coming out on strike. This does not alter the fact that, as both commuters and railwaymen are after the same thing, their interests must be the same.

The chaos caused by the work to rule also showed up who are the productive people in society. No comparable confusion would be caused by the capitalist class ceasing to fulfil their function as parasites and exploiters. Society can do without them but it cannot do without productive work.

This point has been made before, when railwaymen or dockers or factory workers have downed tools. It was shown up recently in New York, when the dustmen went on strike.

Outraged commuters are fond of adopting a moral attitude. So what about the morals of a situation in which the people who are important to society can barely get a living?